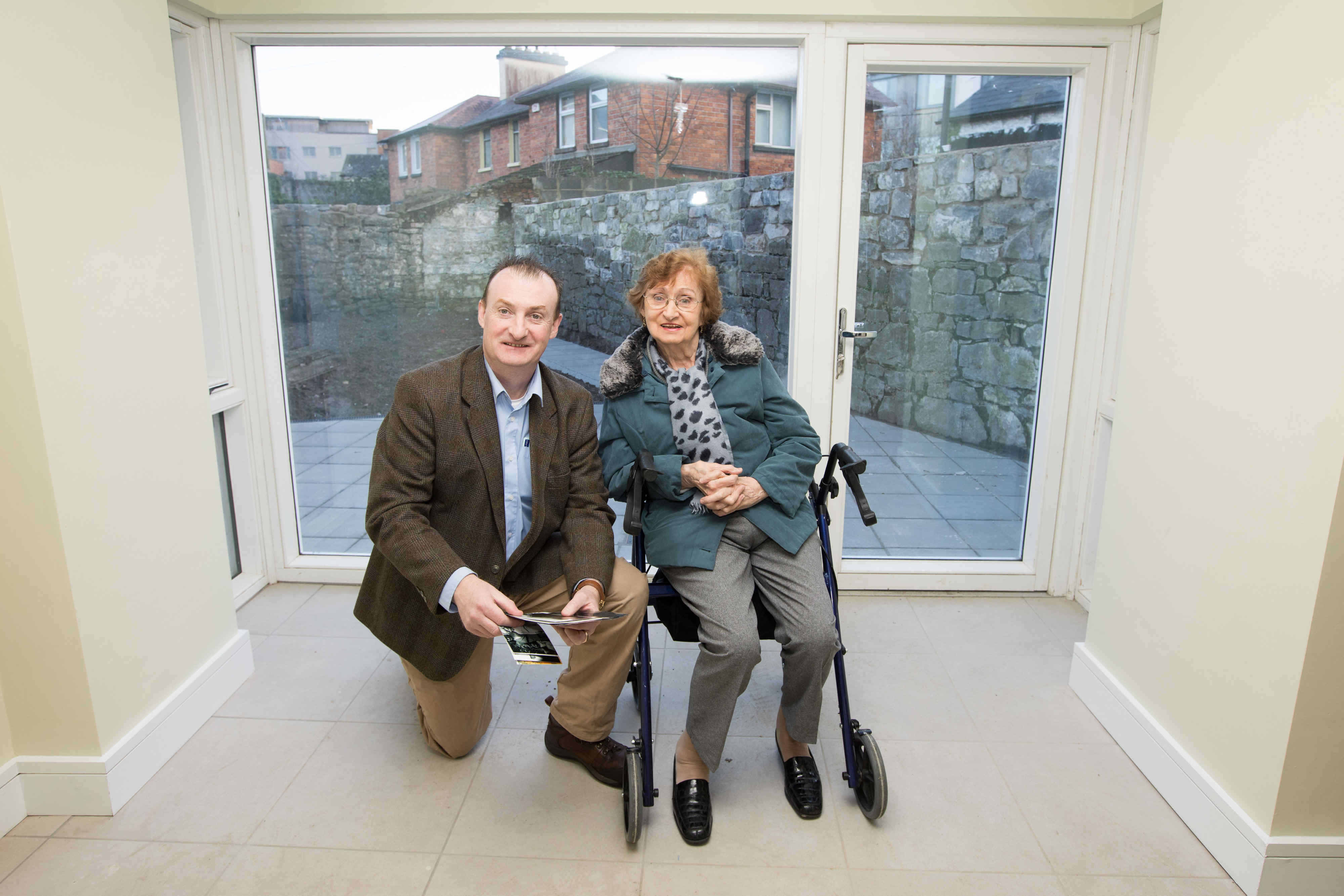 A trip down memory lane for former resident to Gaol Lane

77-year-old Marie Meagher returning to the home she grew up in.  The house on Gaol Lane is one of three on a terrace which has been completely renovated by Limerick City and County Council and will be allocated in the coming months. Photo: Sean Curtin True Media.

A lifetime of memories has come flooding back for a 77-year-old Limerick woman who visited her childhood home in Gaol Lane, Limerick city which has been redeveloped by Limerick City and County Council after having lain derelict for many years.

77-year-old Marie Meagher returning to the home she grew up in. The house on Gaol Lane is one of three on a terrace which has been completely renovated by Limerick City and County Council and will be allocated in the coming months. Photo: Sean Curtin True Media.

Marie Meagher grew up at 9 Gaol Lane, just off Mary Street, in the 1940s and 1950s.  Her next door neighbours were the Horans and Limerick comedian Paschal O’Grady of Tom and Paschal fame.

Accompanied by her son Greg, Marie was invited back to her childhood home to see the complete refurbishment that has been carried out by the local authority.

Tears welled up in Marie’s eyes as she opened the front door and took her first steps into her childhood home in decades.  “I can’t get over this place at all, the downstairs is completely different.  The stairs came right into the room downstairs and there were two bedrooms upstairs.  I think it’s very well done.”

Marie said she remembered her grandparents had lived in the house.  “My grandparents were always here, the Lees.  My father and mother moved back here when I was an infant.  I was so young I can’t even remember and I was here then until I got married.  I remember we had to go out to the bottom of the garden to go to the toilet in the outhouse.  That’s all gone now.  The garden looks beautiful,” Marie recounted on her visit.

There were many happy times in Gaol Lane for Marie.  She recalls the attraction of her bedroom upstairs which had a skylight.  “We used to call them the attic rooms because there was a skylight.  All my friends would like to come over and stick their heads out the skylight,” Marie added.

Marie said it was lovely growing up in the area.  “The O’Gradys lived next door.  You know Paschal from Tom and Paschal fame and the Horans lived on the other side of us.  They were lovely men.  The whole street had many characters.”

When asked if she found Paschal funny, she said: “I don’t remember him being funny!” before the 77-year-old burst out laughing.

77-year-old Marie Meagher with her son Greg returning to the home she grew up in. The house on Gaol Lane is one of three on a terrace which has been completely renovated by Limerick City and County Council and will be allocated in the coming months. Photo: Sean Curtin True Media.

However, life at Gaol Lane was tinged with sadness for Marie.  Her father, who was a civil servant, died in the house leaving a wife and three daughters behind.  Marie who was the eldest was six-year-old at the time.

The project has seen the three terraced houses of 8-10 Gaol Lane, which were constructed in 1894, gutted internally and redesigned to provide a modern and comfortable home for the new families while maintaining the unique features and attractive streetscape of the old terraced houses.

Seamus Hanrahan, Architect and Senior Project Manager with Limerick City and County Council said “The project at Gaol Lane is an excellent example of reusing property which has been derelict for years.  Bringing these homes back to life will allow new families to create their own memories and enliven this city centre street.”

“The homes are now occupied by new residents who are adding their own personal touches to Gaol Lane.  With all new developments, Limerick City and County Council is very conscious of the importance of building sustainable communities across Limerick.”

“The small scale re-development at Gaol Lane can be used as a template for future projects across the city and county.”

The construction work was carried out by local firm Conor Kelly Building Contractor Ltd.  Given the conservation nature of the project, traditional skills were employed such as the manufacture of timber sash windows and the use of lime plaster.

“Given the renewed impetus for the repair and reuse of existing buildings, the importance of retaining and nurturing these traditional skills is critical,” Seamus noted.

77-year-old Marie Meagher returning to the home she grew up in. The house on Gaol Lane is one of three on a terrace which has been completely renovated by Limerick City and County Council and will be allocated in the coming months. Photo: Sean Curtin True Media.

Two initiatives announced by the government are helping to rejuvenate properties that have lain idle for years, similar to Gaol Lane.

The Repair to Lease Scheme is where funding will be provided to bring vacant private properties up to the standard for renting and they will then be leased by the local authority for use as social housing.

It is a requirement that houses or apartments have been vacant for at least one year.  The scheme is targeted at owners of vacant properties who cannot afford or access the funding required to bring them up to the approved standards.

The second initiative is the Buy and Renew Scheme, which is also part of the Rebuilding Ireland, Action Plan for Housing and Homelessness.

This programme enables the local authority or AHBs to purchase homes, renovate them and use them for social housing.

It’s hoped the schemes will mean more houses become available across Limerick, particularly in town and village centres so that families can set up home.

When asked about the redevelopment of her childhood home in Gaol Lane, Marie said: “I think it’s great.  It’s better than knocking them to the ground and just leaving it to go to waste.  I just hope the new tenants will be happy. Well if they were anything like us I’m sure they will be.”

To read more about history in Limerick click here