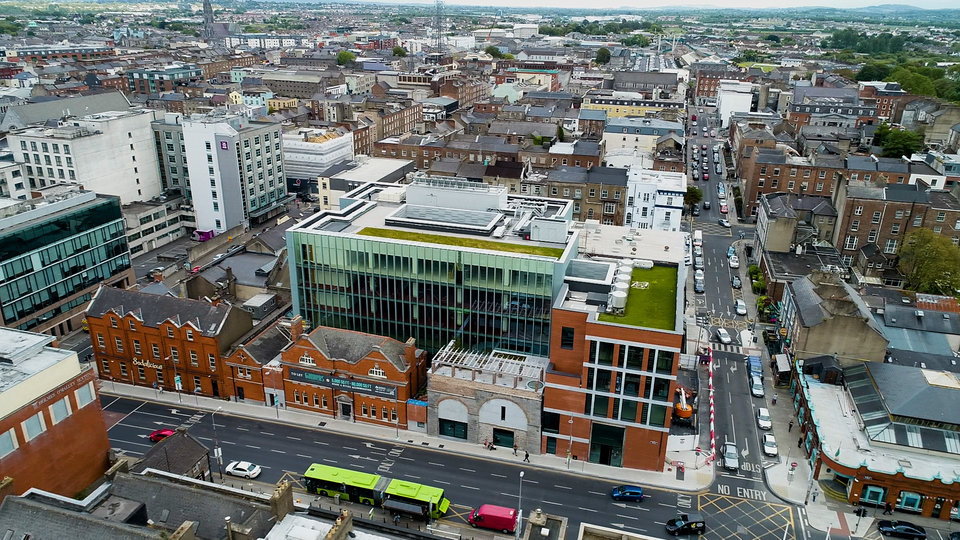 Limerick Twenty Thirty and Limerick City and County Council’s bold ambition to set a new standard for commercial building in Limerick has been brilliantly validated by the selection of Gardens International for a major national award.

Just two months after its completion and in the same month that Nordic Aviation Capital, officially came on board as first tenant, the stunning Henry Street building was a winner in the New Build Workplace category in the prestigious Royal Institute of Architects of Ireland annual awards.

The state-of-the-art commercial office development, which is the first major build in the Limerick Twenty Thirty programme, was designed by Carr Cotter Naessens and Denis Byrne Architects, who received the award at a gala ceremony in Dublin at the weekend. 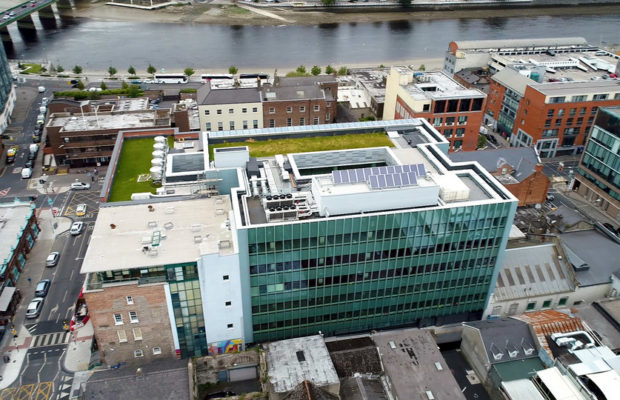 The 112,000 sq. ft Gardens International opened its doors in March after an 18month build and blends the 19th century Roches Hanging Gardens, the Mercantile Building; the former General Post Office and a gleaming new build to the rear.

The awards, in their thirtieth year, are the most sought-after by Irish architects and being selected among the winners is a major moment for the architects and the project, Limerick Twenty Thirty CEO David Conway said.  “We knew we had a very special design here at Gardens but winning this award is an emphatic statement as to how special it is.  These awards are the most prestigious in the industry and are huge recognition for everyone involved.

“Carr Cotter Naessens and Denis Byrne Architects, led by Louise Cotter took on a historic old building in a state of dilapidation and the half-built shell of a new building directly behind it and came back with a brilliant design that has been finished to the highest standards they set. In environmental terms, it’s a LEED Gold building but it’s a gold standard building in every other respect as well.”

Said Louise Cotter:  “This is very proud moment for Carr Cotter Naessens and Denis Byrne Architects. The project has been a challenge from the beginning but one we have relished. The project is more than a building, it is a piece of city, a collage of old and new. Our task was to reconcile the fragments of historic fabric with contemporary structures and in so doing to create a coherent assembly of workspaces and gardens that tell a story that is unique to Limerick.   The end result is something we are delighted with and receiving this award validates the rigorous work of our team.

“We commend Limerick Twenty Thirty for their vision and their support of the design strategy of generosity, sustainability and quality that will build on the urban legacy of the city.  Limerick Twenty Thirty is a very ambitious organisation with a very ambitious development programme.  They set high standards for the design quality and building performance required for Gardens International and it was our brief to realise that ambition.  The RIAI award for Workplace: New Build reaffirms that we have succeeded in doing that. “

The 112,000 sq. ft Gardens International opened its doors in March after an 18month build. It blends the 19th century Roches Hanging Gardens, which included roof-top gardens of exotic fruits; the Mercantile Building; the former General Post Office developed there a century later and a gleaming new build to the rear.  The project has also been developed to LEED Gold standards – the top international benchmark for sustainability.

Limerick Twenty Thirty is a special purpose vehicle created by Limerick City and County Council to transform disused, strategic sites in the city and county into economic engine rooms of growth.  The biggest Irish commercial property development programme undertaken under the auspices of a local authority, its portfolio includes the Opera Site, a 45,170sq m mixed-use scheme currently with a planning application before An Bord Pleanála; the 10 acre Cleeves Riverside Campus that is currently being master-planned; and the Mungret Park housing development, which is also currently being master-planned for a first phase 250 unit and the Troy Studios buildings in Castletroy.