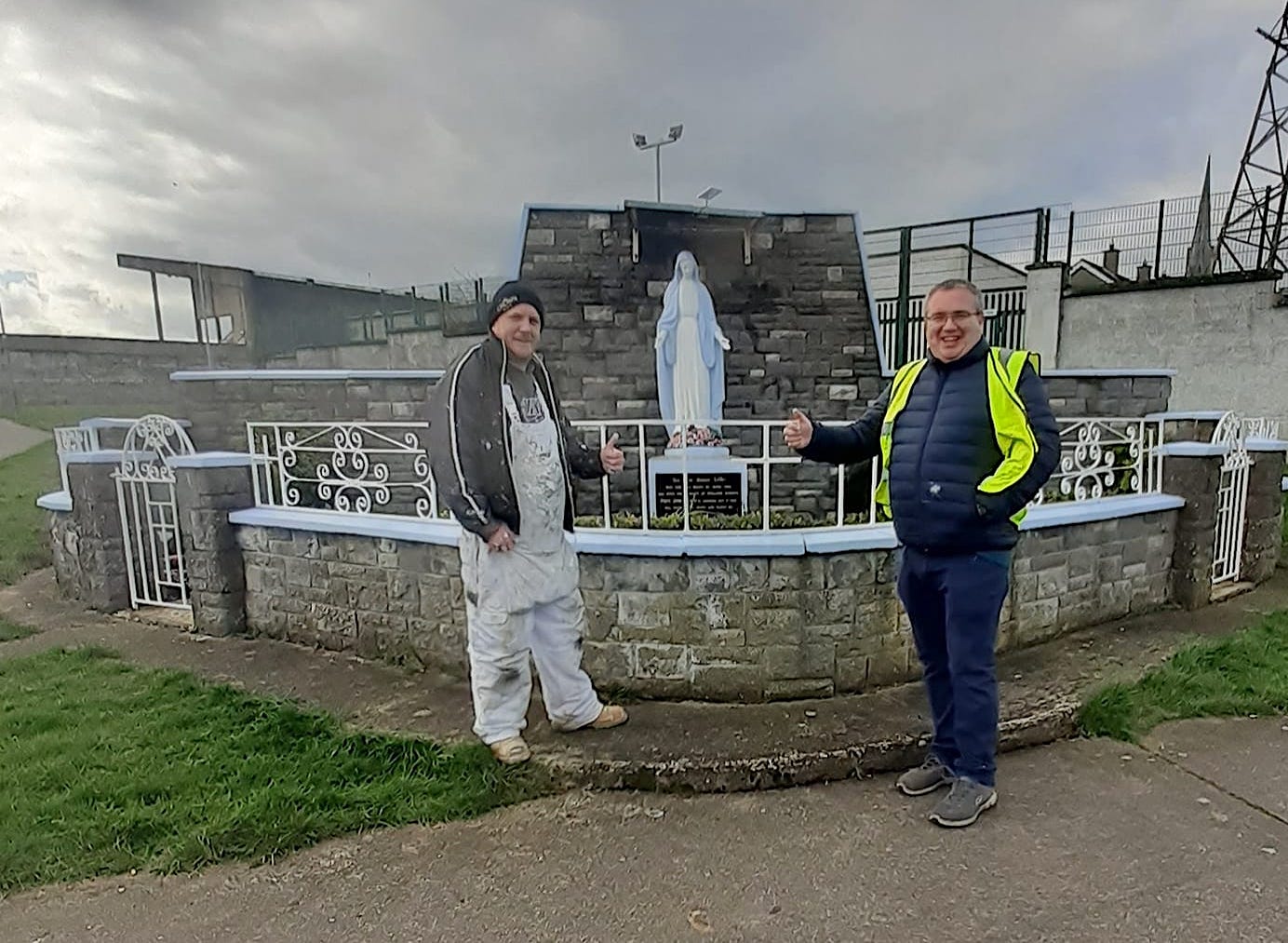 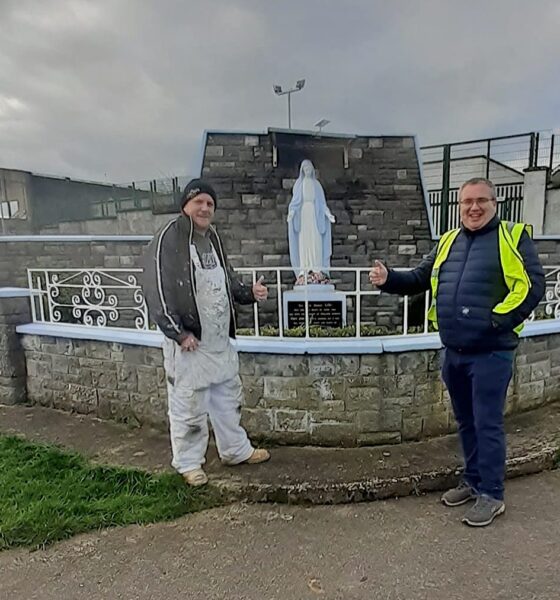 Garryowen Shrine – the locals are very proud of The Shrine 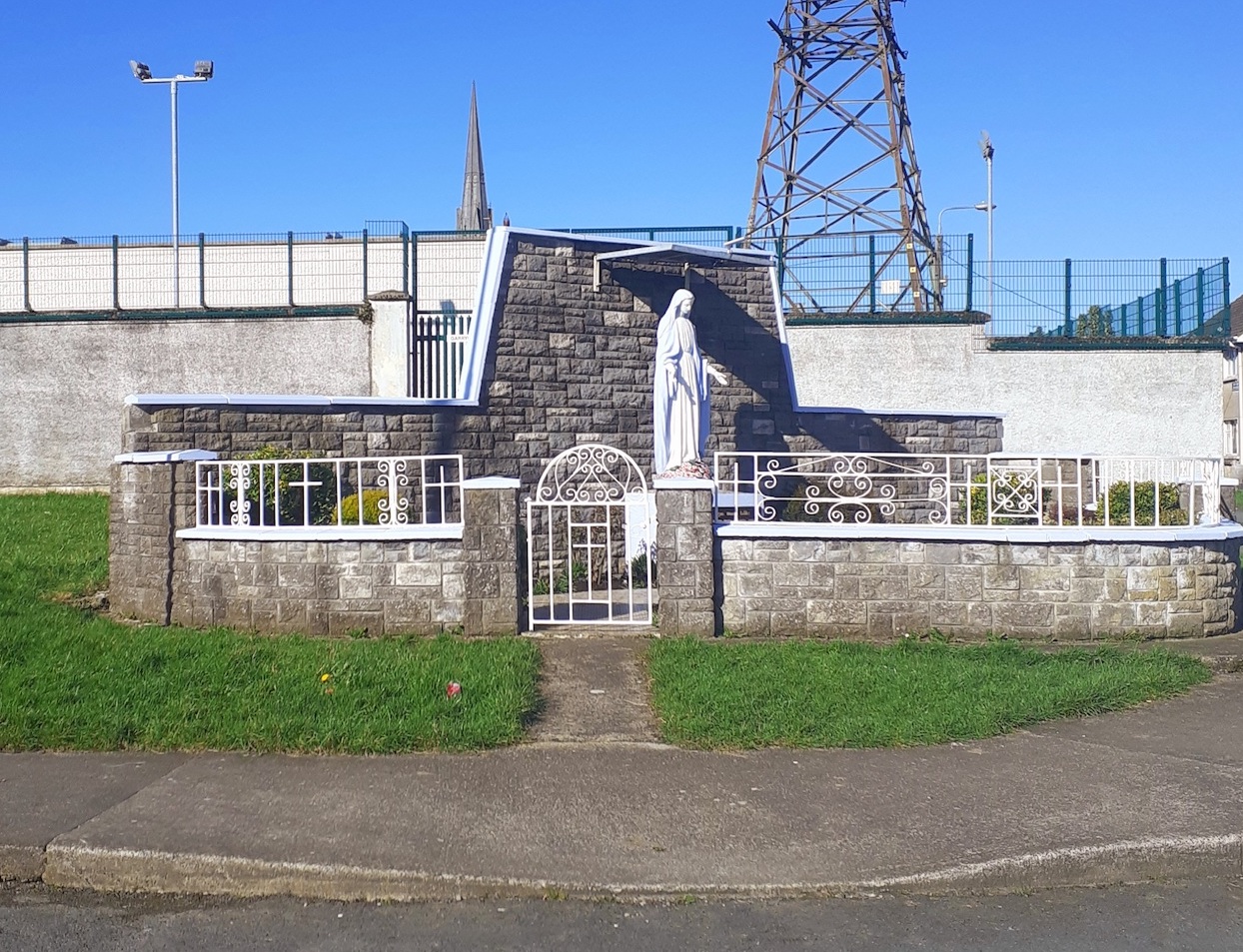 ‘The Shrine’ as it is affectionately known has been an integral part of Garryowen for over 40 years. The area became overgrown and some locals decided to come together to address it. From this was born the Garryowen Residents Association.

Committee Member Tom O’Brien explains, “work to reinvigorate The Shrine was undertaken and attracted a number of local volunteers for whom this project was very important”. He went on to say that the project was supported by funding from the community and through linking with other community agencies such as Limerick City and County Council.

Chairperson John Nugent added, “The upkeep of the shrine nurtures a real sense of place and community in Garryowen. Bringing volunteers together in unusual times to enhance the look and feel of this local landmark has created a positive vibe in our community.

‘The project involved coming together to prune, paint and clean the shrine and its surroundings along with restoring the stonework. Local resident Martin Collins pointed out “the work carried out has been a source of comfort to the older residents in the area who were happy to share with us the memories they had of The Shrine throughout the years”.

The Garryowen Residents Association encourage people to plant a flower or place a candle if they so wish, after all, the shrine belongs to all of us. Please remain socially distanced at all times.

For info on the Garryowen Community Development Project go HERE

Garryowen Irish: Garraí Eoin is a neighbourhood in Limerick, Ireland. The word Garryowen is a transliteration of the Irish Garraí Eoin – “the garden of Owen” – and relates to the association in the 12th century between St John’s Church and the Knights Templar whose house in Limerick was dedicated to John the Baptist. In medieval times Garryowen was located just outside the Irishtown area of the walled city of Limerick. The citadel (located in the grounds of St. John’s Hospital) was the Irishtown’s main fortification.

In 1690, it was the scene of a heroic Jacobite defence-the battle of the breach-which was fought nearby during the Williamite War of 1688–91. The sally port of the original stronghold has been incorporated into the structure of St John’s Hospital. Other parts of the city walls can still be seen within the hospital grounds. The Citadel remained in use as a military barracks until 1752. St John’s Gate was situated on the main roadway, nearby, but no trace of it now remains.

St John’s Cathedral is located in the area and dates from 1861 and has Ireland’s tallest spire at 94m. St John’s Hospital is located adjacent to the cathedral which dates back to 1780 and was founded by Lady Hartstonge and other benefactors as a Fever and Lock Hospital and treated epidemics during the Great Famine (1845-1847). St John’s Square is located across the way from the cathedral and was Limerick’s first example of fashionable architecture and civic spaces and was completed in 1751. For a time the area was considered one of Limerick’s most fashionable residential areas.

Garryowen Football Club, a prominent Rugby Union club in Ireland’s AIB League has its origins in the area; however, it is no longer located in the neighbourhood of Garryowen but rather in the Dooradoyle area of the Limerick Suburbs. The Markets Field was Garryowen’s home ground until 1958 when they moved to Dooradoyle. The Markets Field has since been in use as a greyhound racing stadium until July 2010. It is the home of Limerick FC following the acquisition of the grounds by the JP McManus foundation.