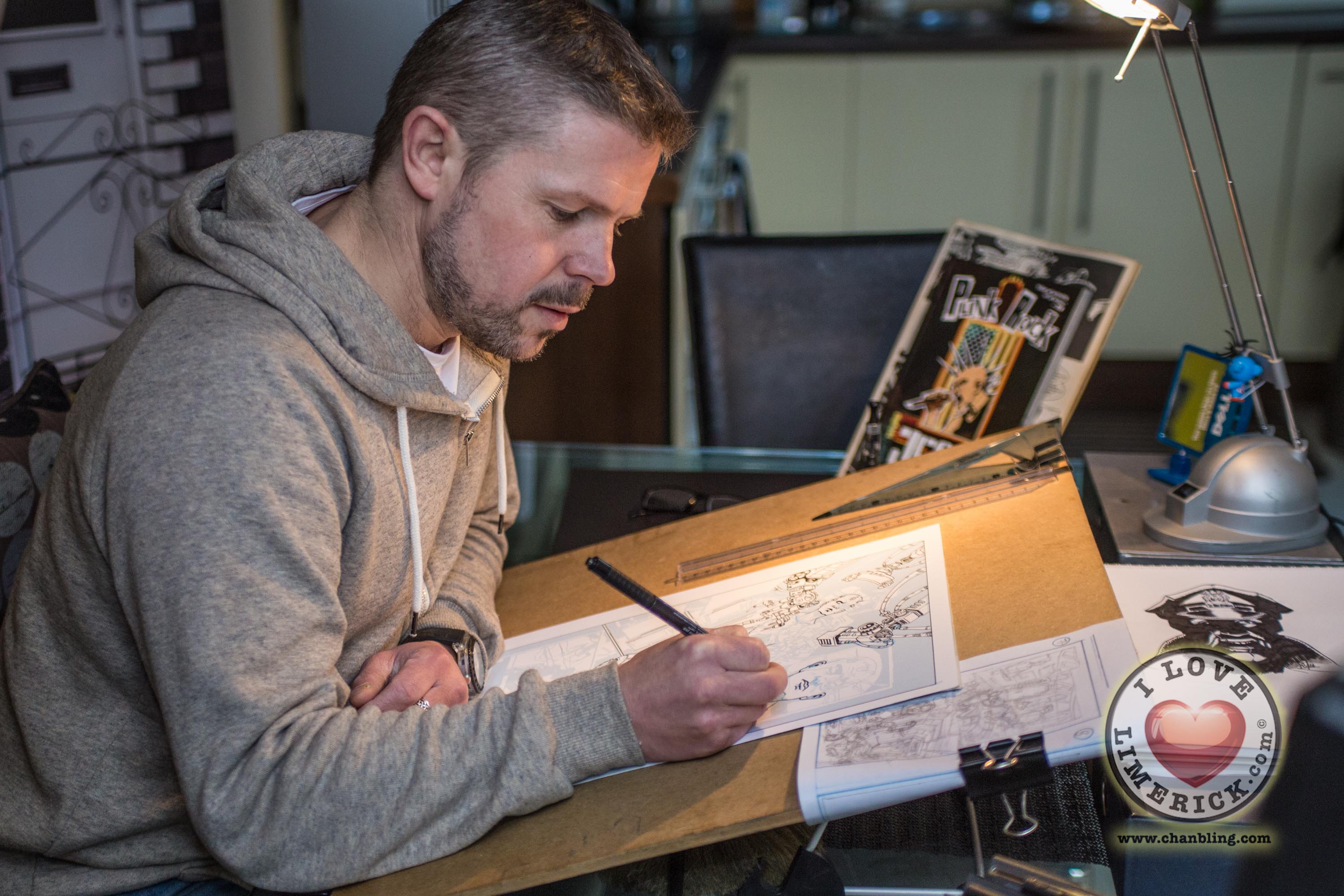 Gary O’Donnell Speaks About Life as a Limerick Artist

Gary O’Donnell on Life as a Limerick Artist

Looking back on his youth, Gary O’Donnell remembers no matter where he was or what he was doing; his mind was focused on drawing. From reading the latest Beano to sketching, it is all he thought about. But his art has come a long way since, boasting greater detail than a Denis the Menace comic.

“When I got into secondary school I met a friend there, Leonard O’Grady, he was an artist, he was drawing stuff I’d never seen before – he introduced me to 2000AD, Judge Dredd and so on,” he said. The introduction to these comics set Gary on his journey in artistry.

He found himself finishing class in school and running to the local newsagent to pick up the latest 2000AD to read the stories, admire the graphics and try to recreate the works of the comic-book artists he idolised with his pen and paper.

Gary O’Donnell will feature in The Thing Artbook releasing in July 2017.

“2000AD was a whole new world,” he said. “The art was so different, it was more down to Earth; it was hardcore science fiction which really fired my imagination and inspired me. I would sit down and draw the pages from 2000AD and that’s how I started to learn how to draw.”

Looking beyond the comic books, studying art in school helped the Limerick man in finding further artistic inspiration. Being exposed to the works of Carravagio and Mucha.

“You had your Van Gogh and that, but Carravagio’s lighting was really cool, I was always into the detailed, realistic work,” he said, before adding, “The Irish artist, Harry Clarke, he would be most famous for his stained glass, but he had a series of ink illustrations for Edgar Allen Poe stories that were crazily detailed, he was amazing.”

After moving to England for a number of years, life got in the way and Gary O’Donnell was unable to dedicate as much time to his craft, “sketching here and there”.

A peek at Garys submission for The Thing art book.

After moving back to Ireland, Richard Lynch convinced him to make a Facebook Page for his art. At this point in his life, Gary had been working for himself, never seeking to be published or applying for work with comic book companies.

“The great thing about the comic art community online is that everybody has each other’s back. You get the odd troll but other artists can tell when somebody is being harsh and call them out on it,” said Gary.

“When I started putting up pieces, I started getting feedback and attention, I thought ‘this is great,” he said. He continued, “I was offered free work for some anthologies, to get my name out there, so I did that – a lot of that. I did my first published work for Insomnia Publications they were independent publishers.”

Having been published with many independent companies, some paid and unpaid, Gary O’Donnell considers his best moment in art was when he was offered his first colour project.

“I hope I haven’t gotten to my best moment yet.” He says laughing. “My best moment so far is when someone contacted me for my first job to draw and colour. I had been commissioned by an English creator, Jimmy Furlong, to do a ten-page story for their new book. It was a crazy concept about a band of monkeys that fight evil in 17th century France

“Mike Lynch, from Ennis, had written it, so that was nice to tie in with an Irish writer, and the guys publishing it were from England. Around the time I had just started using Photoshop and Jimmy contacted me asking would I like to colour the story too, so that was amazing.”

A piece of Gary’s artwork of one of his favourite ever characters, Judge Dredd of 2000AD

Boasting an impressive list of companies whom Gary O’Donnell has worked with, there is one name missing from the list that keeps him motivated in his work. Judging by his early influences, it may not be a surprise to know Gary one day hopes to be published in 2000AD.

“2000AD is the Holy Grail, if I was published there it would be a dream come true,” he said, speaking of the achievement of his friend in getting published. “It was like we were kids again, I ran down to the Eason and picked up the issue and thought ‘wow this is Steve,” he added.

“I had been given sneaky peeks at some sketches, because he asked our group what our thoughts were while he worked on it. It was amazing.”

The Limerick artist offered some advice for people who would like to pursue a future in comic book artistry:

“You can do some free stuff at the start, so you can get your name out there, you then have a list of books where people can check out your stuff. Do it for a short time until you find your feet, then you can start saying no, or do it in your free time. That’s what I do in my free time now.”

Most recently, Gary’s art has featured in the Printed In Blood’s new ‘The Thing Artbook’, an illustrated celebration of the John Carpenter masterpiece. The live presales for this book were available from March 7.

‘The Thing Artbook’ is available for purchase here