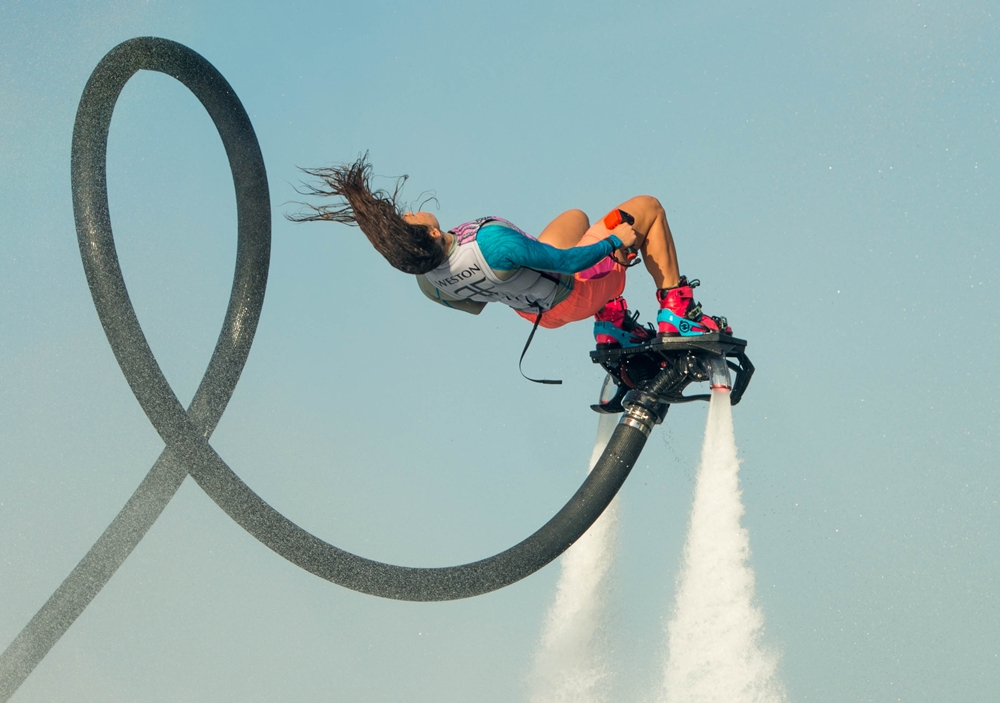 The majestic River Shannon will host some of the world’s top watersport performers this weekend as a full programme of action packed activities and events take place for Riverfest 2016, Limerick’s hugely popular summer festival.

The world’s top flyboarder – 2016 Ladies Flyboard champion and stunt queen Gemma Weston Riverfest 2016 Special Guest is from New Zealand and will headline the bill with dramatic performances throughout the weekend as she arrives for the first time in Ireland.

Her performances will be a treat for the thousands of spectators expected to flock to Limerick this weekend as she practically dances mid-air performing backward and forward flips, all with effortless ease.  Gemma will be joined by Ireland’s David O’Caoimh, one of the world’s top wakeboarders and the British Freestyle Jet Ski Championship winning team of Craig Halloway, Chris Ames and David Herridge who will also perform on Saturday 30th April from 12pm- 5pm and from 1pm-5pm on Sunday 1 May.

The showcase performances will begin at 12 noon between Sarsfield Bridge and Thomond Bridge on Saturday, April 30 and will take place at 1pm,2pm and 3pm.

On Sunday, 1 May, Gemma Weston Riverfest 2016 Special Guest will start at 12.30pm and again perform every hour finishing at 3.30pm.

“The Shannon is our greatest natural asset and we’re delighted to be able to showcase some of the world’s top watersport champions in Limerick for what promises to be a truly spectacular weekend,” said Cllr Liam Galvin, Mayor of the City and County of Limerick.

“Flyboarders can get as high as 70 ft in the air and move at outrageous speeds which gives them the leverage to perform adrenaline-pumping stunts. I’m delighted that the Shannon will host such an action packed programme for Riverfest for what is, without doubt, the busiest and most popular festival weekend in Limerick. There’s a huge variety of events on offer showcasing our river, local food produce and live music scene rounded off with a spectacular fireworks display- it really is set to be the best weekend of the year.”

As part of Riverfest 2016, Limerick’s Nevsail Watersports and Rock Climbing are also offering free kayaking, stand up paddle boarding and boat tours on Saturday the 30th of April, starting at 11 am – 4:30 pm and on Sunday the 1st of May from 12 –5:30 pm from the Hunt Museum.

Dave Neville from Nevsail Watersports said the sessions are very safe and fun kayaking sessions, with kayak skills, kayaking games and fun facts and history about Limerick all included.

“Anyone can take part from the age of 6 years and no previous kayaking skills or knowledge is needed,” he said. We have single, two seater and three seater kayaks available, so if anyone is a little nervous they can share a kayak and we operate when conditions are calm and easy for all to enjoy. We will also be running our free stand up paddle boarding sessions and boat tours from the Hunt Museum, for lots more fun and exciting adventures keeping all very well entertained and active on the water during this fantastic weekend.

All participants need to bring with them are a pair of old runners, swim wear/togs and a towel and booking is on 086 3308236, or email :[email protected]

Get West will host a free action packed afternoon of kayaking, stand up paddleboarding, archery, water walking zorbs and Ireland’s tallest mobile climbing wall at ‘Poor Man’s Kilkee’ on Monday, 2nd May from 1-4pm. It is advised that all water-based activities are booked in advance at:www.getwest.ie/events

There will be plenty of sailing during Riverfest Limerick with Scouting Ireland laying on four sail boats from Operation Lelievlet which will operate from the Customs House Quay jetty from 12 noon to 3pm on Saturday and Sunday. These Lelievlet boats can take six people at a time for a short sail up to King Johns Castle and will take people on a first come first served basis.

The Lelievlets will also be joined on Sunday by the #cityone – the new Irish sailing dinghys built in Limerick, the City One Limerick Dinghy from the AK. Ilen Company is designed for use on the Shannon as it passes through the city and opens into estuary on its way to the Atlantic. These are beautiful boats and are well worth taking the time to watch them darting between the bridges on Sunday afternoon.

Riverfest 2016 is Limerick’s largest festival with every hotel room in the city set to be fully booked.

“The May Bank Holiday weekend is a truly bumper weekend for local hotels in Limerick,” said Sean Lally, spokesperson, Limerick Hotels Association. “There is very limited availability but the full house signs will be up soon as this year’s Riverfest Limerick promises to be one of the best yet.”

Other highlights of Riverfest 2016 include:

The weekend will also see thousands of runners and walkers come to the city to participate in the Barrington’s Hospital Great Limerick Run which takes in many of the historical and scenic sights across Limerick, on Sunday 1st May. Now the largest participation event outside of Dublin, the Run features entries from all 32 counties of Ireland and over 20 countries with musical acts from marching bands, gospel choirs, traditional music and DJs entertaining participants along the route of the marathon, half marathon and 10K event.