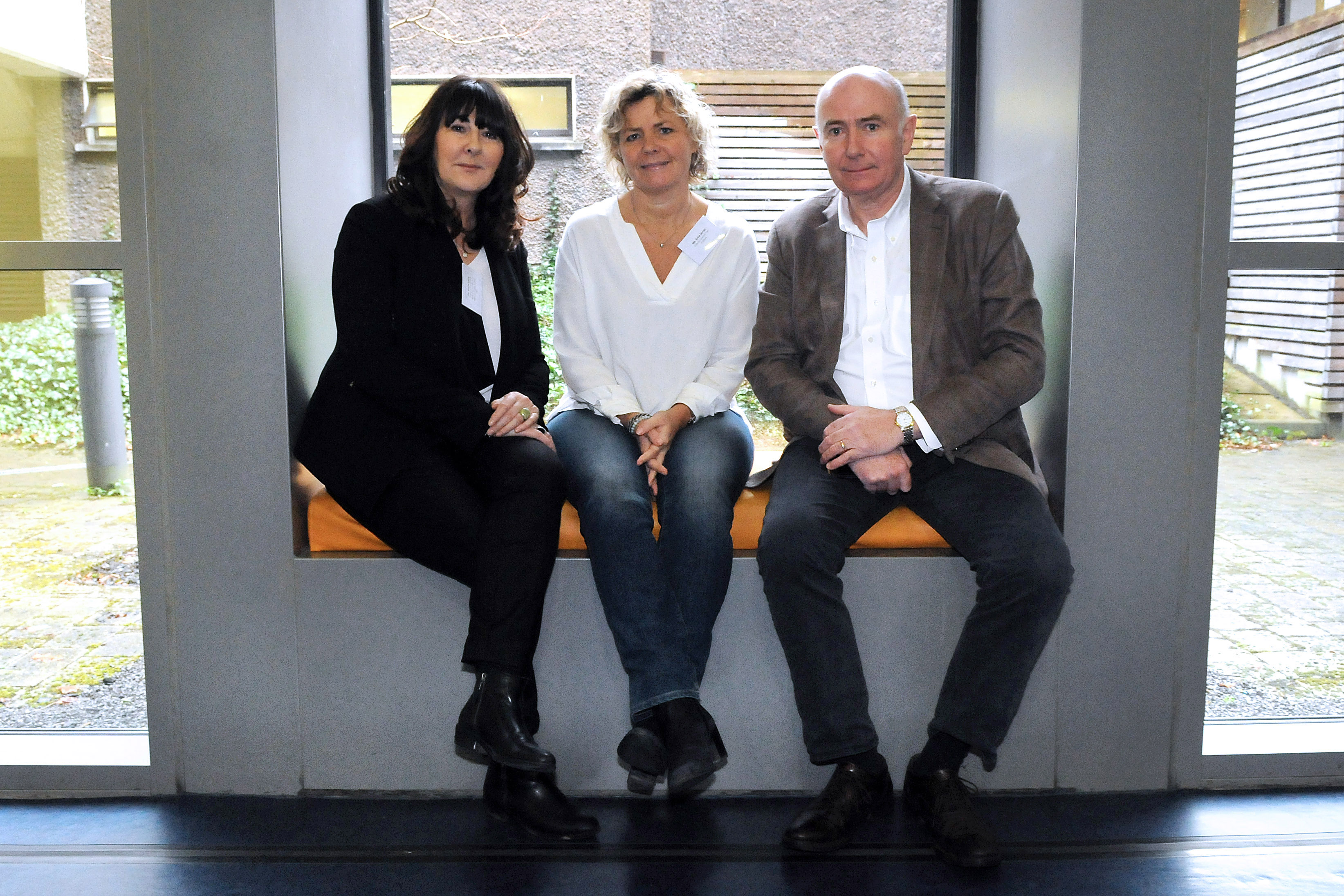 Picture above: 4/3/2016 Speaking at the Women in Irish Film Industry colloquium, held at Mary Immaculate College, Limerick was James Hickey, CEO of the Irish Film Board; who spoke about creating gender equality in the Irish Film Industry. Pictured here with (left) Dr Susan Liddy, organiser &amp; lecturer in Media &amp; Communications, MIC and Anna Serner, Director of the Swedish Film Institute. The one day event provided a public forum in which to address the under-representation of women in the Irish film industry. According to the Dr Liddy the colloquium provided a space to unpick the many gender specific challenges facing women. It also sent out a strong signal that for solid and lasting change to occur broadcasters and other organisations need to take the Film Board’s lead and seriously consider their gender policies. Gender Equality set to Enhance the Irish Film Industry
Picture Credit: Gareth Williams / Press 22

Gender equality will lead to the enhancement of the Irish film industry – not negatively impact on the quality of its output according to Anna Serner, Director of the Swedish Film Institute, who made her first Irish public appearance to speak at a recent colloquium, organised by Dr Susan Liddy, at Mary Immaculate College entitled Women in the Irish Film Industry: Moving from the Margins to the Centre. Gender Equality set to the Enhance the Irish Film Industry

Hosted by the Department of Media & Communication Studies, MIC, the one day event addressed the current under-representation of women in the Irish film industry. Practitioners, representatives from funding bodies, broadcasters, professional guilds and voluntary organisations all attended to lend their voice to the debate in the hope of positively influencing and implementing gender equality strategies right across the industry.

Key note speech was delivered by Anna Serner, who spoke about the successful Swedish model of 50/50 gender funding policy implemented under her tenure, the first country to reach this benchmark. The success of this policy has in turn led to Serner being called many things from ‘a bitch’ to a woman who has ‘set the world on fire’ and ‘the most powerful person in Swedish cinema’.  Speaking in MIC Serner insisted that “it is important to be aware of unconscious and conscious bias as male projects are just not scrutinized in the same way as female projects”.  She urged commissioners to find the female talent because it is undoubtedly there. Speaking on the success of the 50/50 gender policy in Sweden she noted that far from quality being threatened, an often voiced fear, it is actually enhanced as can be evidenced by the number of  international accolades awarded to projects by Swedish women filmmakers have been consistently winning international accolades at film festivals throughout the world.

Other speakers at the included James Hickey (Irish Film Board CEO), Dr Annie Doona (Acting Chair of the Irish Film Board/President IADT) who as part of a panel discussion entitled Creating Gender Equality in the Irish Film Industry provided an update on the IFB’s Gender Equality Six Point Plan. Dr Doona spoke of the IFB’s goal to have a 50/50 gender funding policy successfully implemented within three years but in order to achieve this they would, she said, need to work with the industry, with production companies and with all those who make creative decisions in order to identify conscious bias and root it out. Dr Doona also spoke of the importance of working with schools and 3rd level institutions in creating awareness around both conscious and unconscious basis. Concluding she said “We (Irish Film Board) are committed to taking this seriously.  Money talks as does equality!”

A number of startling facts and figures were produced on the day including, according to Stephanie Comey from Broadcasting Authority of Ireland, that less than 20% of directors who have received funding from Sound and Vision were females.  Catherine Tiernan, Screen Producers Ireland, informed the audience that outside of Fair City the last RTE drama written by a female writer was RAW which finished in 2013. David Kavangh, CEO of Writers Guild of Ireland, questioned why more women don’t apply to the IFB for funding.  According to Kavanagh recent statistics show women tend to go straight to publishing as opposed to applying for IFB funding.  “There are no shortage of experienced female screen writers in Ireland.  They don’t require training – they require funding”.

Ailish McElmeel, Women in Film and Television Ireland, commended the IFB on their Six point Plan but stressed the importance of having this plan filtered right down to the entire industry to include technicians, camera operators etc.

Marian Quinn, actress and director and member of the Quinn family dynasty along with her brothers Aiden Quinn and cinematographer Declan Quinn, spoke of her frustrating experiences as a female working in the industry.  Having completed her first feature film she believed she would be then be “part of the club and doors would open”.  However this was not the case as she recalled how “Nothing prepared me for the difficulty in making a second feature…. While my male contemporaries were nourished, and supported and funded with their second, third and fourth films I was still waiting”.

Concluding she thanked all those involved in the colloquium saying that she felt as though the veil has finally been lifted on the issue of gender inequality in the Irish film industry.

Other speakers at the event included Alice Mary Higgins, Campaigns and Policy Officer, National Women’s Council of Ireland, who chaired a round table discussion of New Horizons? Reflections Going Forward; Liz Gill, writer and director of Goldfish Memory and director of such shows as The Clinic and Raw; who spoke on the topic of Putting Women in the Picture: Policy and Practice;  Holly Aylett,  Head Researcher with the European Women’s Audio-Visual Network,  who spoke about women in the European film industry.  Other panel members included Lelia Doolan, former chair of IFB, founder and former director of Galway Film Fleadh; Brigie de Courcy, Executive Producer of Fair City, RTE and  Lauren Mackenzie, writer of the feature film The Daisy Chain and TV shows such as Fair City, Pure Mule, Bachelors Walk in addition to being story editor on TV3’s acclaimed Red Rock.

Bringing the event to a close Dr. Liddy, event organiser and MIC lecturer, commented that the day marked a significant moment in Irish film and cultural life.  “I believe that the colloquium provided a space to unpick the many gender specific challenges facing women.  It also sent out a strong signal that for solid and lasting change to occur broadcasters and other organisations need to take the Film Board’s lead and seriously consider their gender policies. Decisive action needs to be taken to target, support and facilitate women carving out their rightful place in the industry.”

She also urged those present to translate aspiration into concrete action. “It behoves those of us here who have the power to create change to seize the moment; to stand firm and make the hard choices to bring about that change, so long overdue. To lead. It also behoves women who have found themselves beaten down over the years to stand up again and give it one more push. To believe that this time the door really is open and it is possible, with hard work, faith and courage to find your place in the industry”.