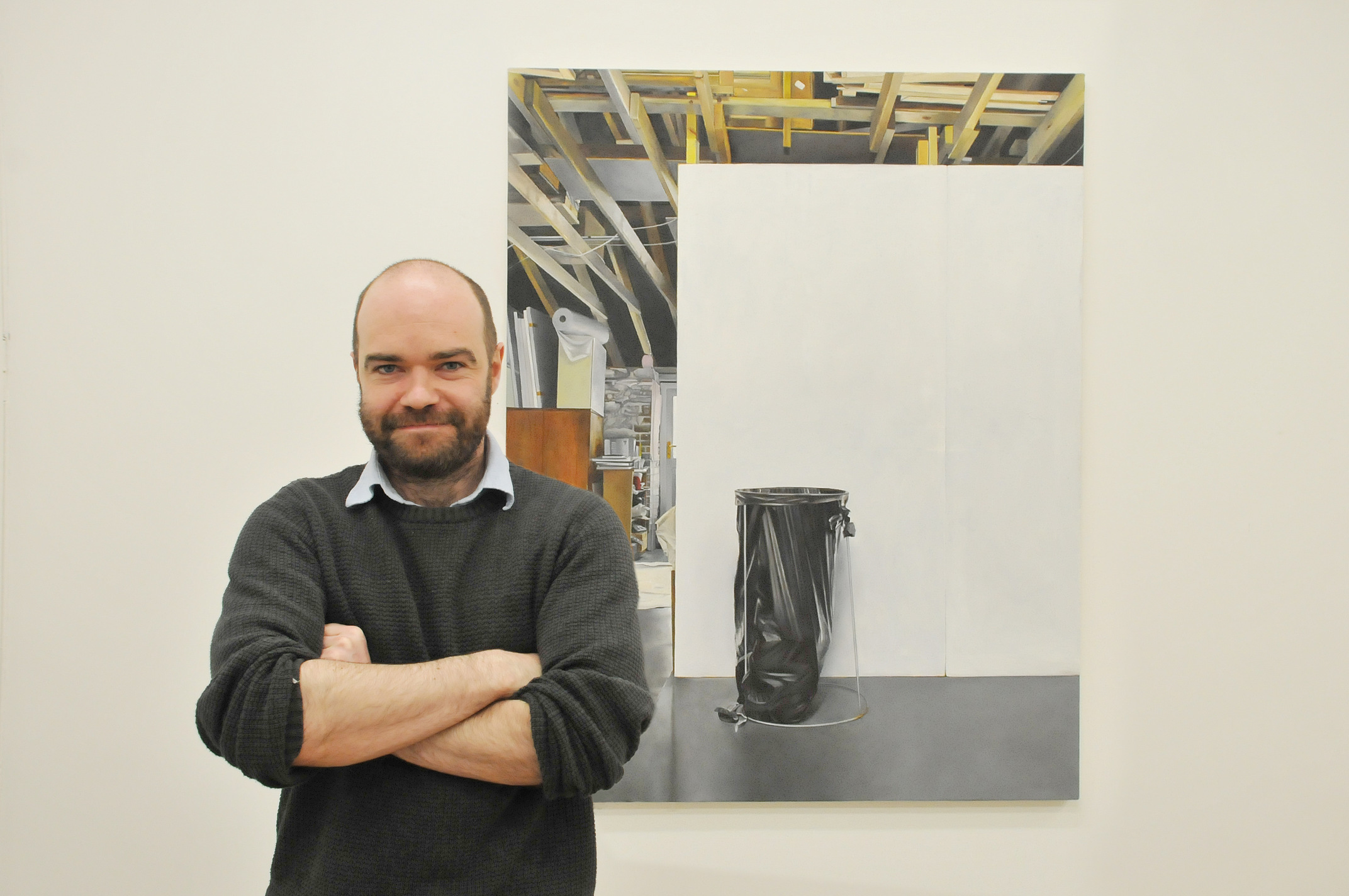 Gerry Davis standing beside one of his paintings at his recent solo exhibition ‘studios’ at Pallas Projects, Dublin.

“The artwork of Gerry Davis reconciles the gap between the classical and the modern; flowing effortlessly from representational oil painting to digital art” – J.Ryan

Gerry Davis is a limerick-based artist who came to the city from South Tipperary to study and develop his passion into a professional career. After graduating from Limerick School of Art and Design, the Tipperary native then made the decision to stay and work from Wickham Street Studios which was set up in 2009 with the aim of providing affordable studio spaces for artists, as well as an outlet for its members to be part of a wider artistic community.

“At the time I was graduating from LSAD, Limerick was enjoying an explosion of artist-run spaces in the city. Interestingly, this was largely thanks to a combination of the economic recession and the Creative Limerick initiative, which negotiated temporary occupancy of vacant retail units while they were between commercial lettings. As a result, spaces such as Faber Studios, Occupy Space, Ormston house and Wickham St Studios were all started during this time.”

In describing his own work, Gerry says “My paintings are about artists studios. These are very interesting to me because there is such a broad range of artistic practices in Ireland today. When I started out I jumped from one idea to the next alot, and I was never fully happy with that because everything looked very inconsistent. This went on for a long time and I ended up second guessing myself quite a bit. But then one day I decided to simply make a painting of my actual surroundings. This was liberating because there was no question of deciding what subject matter to paint or what statement I was trying to make. Since then I’ve been painting realistically, and it allows me to focus much more on the process of painting itself. The concepts and ideas come naturally then and the problem of consistency is solved also.”

Gerry has gone on to win countless awards not only in Limerick but throughout the rest of the country also. This year he won a Merit Award at the Golden Fleece Awards 2016 and has recently been shortlisted for the Hennessy Portrait Awards 2016.

Written by ilovelimerick.com correspondent Rebecca Davis.
For more information on the artist, visit his website here.
To read more about art in Limerick, click here.