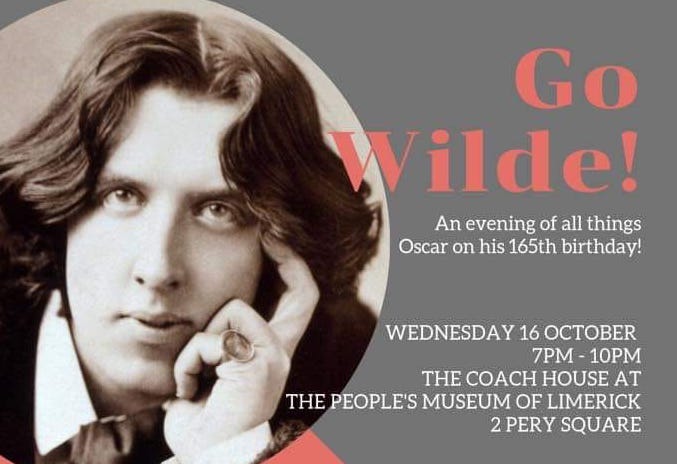 ‘Go Wilde’ event to take place in The People’s Museum of Limerick in celebration of Oscar Wilde’s 165th birthday.

The first public viewing of a recently discovered image of a young Oscar Wilde will be on display at ‘Go Wilde!’- an evening event celebrating the life of Oscar Wilde on his 165th birthday, Wednesday, October 16, at The People’s Museum of Limerick and will be accompanied with a selection of guest speakers, music from Emmerdale star, Liam O’Brien and a sneak preview of Myles Breen’s ‘A Wilde Fan’.

The image was discovered by Karen Ievers of Sixmilebridge, Co. Clare while browsing historical carte de visite (cdv) images on the online shopping site eBay. The image presentation will be part of an evening event dedicated to the life and legacy of Oscar Wilde.  There will be other 19th c. photos on display from Karen Ievers’ collection including those of additional Wilde family members.

Karen said, “I’ve been a huge fan of Oscar Wilde for many years now, and so it is a real privilege for me to be able to honour him in my own small way with our Go Wilde! event which promises to be a very special evening dedicated to his life and works. I am looking forward with great anticipation to the event, and hope that Oscar Wilde fans, in and around Limerick, will make the effort to come out and join us at the newly opened Coach House at 2 Pery Square as we celebrate Oscar Wilde’s incredible life:  “To live is the rarest thing in the world. Most people exist, that is all.” —Oscar Wilde.

The event includes a bubbles and canapes reception, with music provided by Limerick native Liam O’Brien of ‘Emmerdale’ fame.

Rose Servitova is an award-winning writer and will be speaking on ‘Wit in Writing.’ Her debut novel, ‘The Longbourn Letters’ – The Correspondence between Mr. Collins & Mr. Bennet has been described as “a literary triumph”, receiving international acclaim since its publication in 2017. Her second novel, the completion of Jane Austen’s ‘The Watsons’ will be released in late October. Rose attends literary events and festivals in Ireland and the UK discussing humour in writing, the importance of minor characters and silly fictional clergymen.

Dr. David Clare, speaking on Oscar Wilde’s formative years in Ireland and his status as an Irish outsider in London, is a Lecturer in Drama and Theatre Studies at Mary Immaculate College, University of Limerick. Previously, he held two IRC postdoctoral research fellowships at NUI Galway, both of which were based in the Moore Institute. These projects included his own “The Hibernicising of the Anglo-Irish Playwright” (2014-2016) and Prof. Patrick Lonergan-led “Performance, Nation, and Globalization: Modern Irish Drama and its International Contexts” (2012-2013).

The evening will also feature a sneak preview of Bottom Dog Theatre Co.’s latest production entitled ‘A Wilde Fan,’ written and performed by Myles Breen. He is one of the most instantly recognisable faces in Limerick, Myles Breen is an actor, director and playwright. Myles Breen has been surrounded by the arts all his life, being introduced to theatre at a young age. He has been performing, directing and writing for an incredible 27 years, from appearing in the Irish television soap Fair City to playing Claudius in Hamlet.

To conclude, the event will end with birthday cake, tea & coffee, and a raffle (included in the price of the ticket).

Tickets to this event are extremely limited and can be purchased from Eventbrite.ie at €39/person. 5 euros of each ticket sale will be donated to Pieta House.   The event will take place from 7-10pm, Wednesday, October 16 at the historic, Coach House at The People’s Museum.

Actor Myles Breen said, “To quote Oscar: ‘I could deny myself the pleasure of talking, but I cannot deny you the pleasure of listening’. Delighted to be part of this birthday party, and sharing excerpts from my new one man show ‘A Wilde Fan’. ‘Go Wilde’ is a celebration of all things Wilde and also supporting a very worthy cause”.