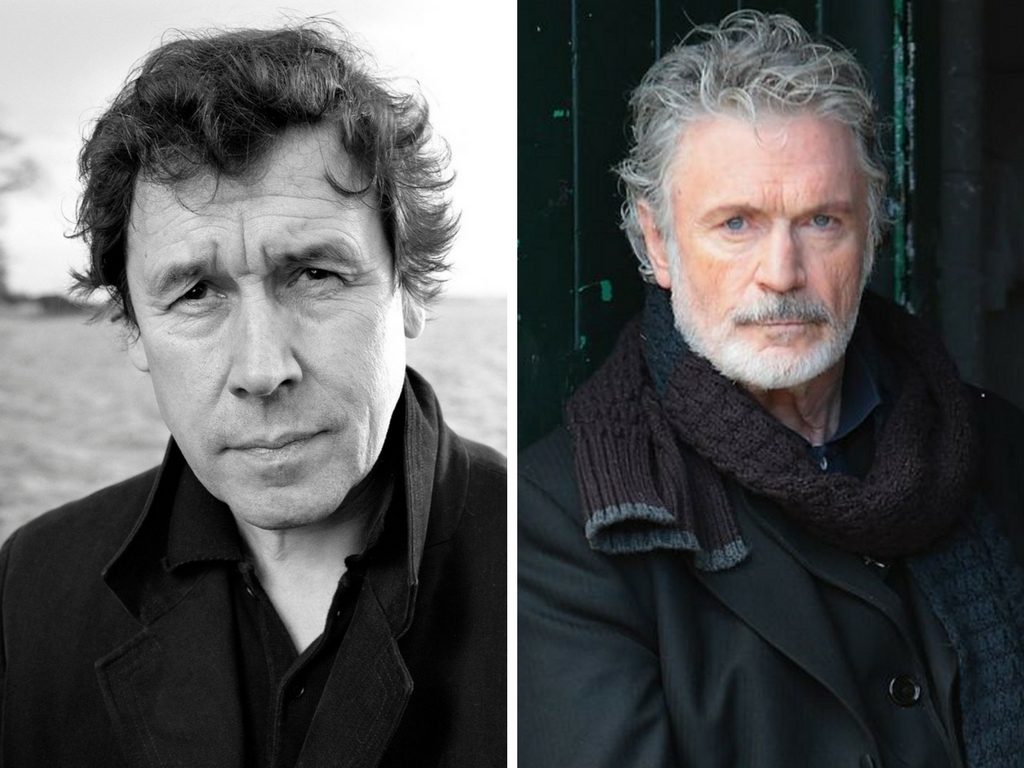 GOLDENHAIR playing at the University Concert Hall will be narrated by Stephen Rea and Patrick Bergin.

Brian, who now lives in Los Angeles, is originally from Meath and received his first IFTA for his music score for Zonad, John Carney’s sci-fi comedy-drama.  His composition “Lay Your Head Down” from his score for the film Albert Nobbs earned him his first Golden Globe nomination.   Most recently he won an IFTA for the music score for Jim Sheridan’s Secret Scripture produced by Noel Pearson.

Stephen attends The Richard Harris International Film Festival for the second time, in 2016 he was the narrator for a live script read of Shane Connaughton’s “The Pirate Queen – The story of Grace O’Malley”.  In the course of an acting career spanning nearly 5 decades and many accolades, he has appeared on our TV screens alongside Maggie Gyllenhaal in An Honourable Woman for which he won a BAFTA.  25 years after appearing in Neil Jordan’s The Crying Game (BAFTA & Oscar-nominated for best actor 1992) he has just been cast in Neil’s upcoming feature film The Widow.

Patrick shot to fame for role, alongside Julia Roberts, in the 1991 film Sleeping with the Enemy.  Born in Dublin, Patrick moved to London when he was 17 and first set up a theatre group whilst also working as a brickie and a librarian.  He attended college, received a degree and taught  English for a few years before going into acting full-time.  In 1993, Bergin bought an old church in Tipperary and converted it into a poetry centre. Bergin explains, “I’ve recently come to feel I can encourage children and teenagers with their writing. I’m continually giving groups money to make videos, but I insist that they have a good script. I do it because it makes the difference between them doing a video or not. It doesn’t cost a lot, and it gives kids an incredible boost of confidence.”  Patrick has recently joined the cast of long-running UK soap, EastEnders.

Vocalists on the night will include Limerick’s Kathleen Turner – Kathleen Turner is a singer-songwriter who fuses sounds of folk and soul, with lyrics that are incisive, simple and honest and melodies that stay with you.  She is swiftly gaining a reputation as one to watch on the Irish music scene. Originally from Co. Tyrone, Kathleen now calls Limerick her home.

William Byrne appeared in  Jesus Christ Superstar in the West End before taking over the role of “Jesus” for the National Tour as well as Ireland and Germany. William appeared as “Thorin Oakenshield” in the acclaimed stage adaptation of The Hobbit the Queens Theatre in the West End and on National Tour.  Based in London William has also appeared on stage in musicals playing “Emcee” in Cabaret, “Joseph” in Joseph and the Amazing Technicolor Dreamcoat, “The Arbitor” in Chess and “Bob Cratchit” in Scrooge.

Lucia Evans was born and raised in Zimbabwe, but left her homeland at the age of 19 to live in Ireland. She won RTÉ’s television talent show, You’re a Star, and began writing her own songs.  Lucia has performed at many prestigious events including the 2006 Special Olympics Opening ceremony at the Odyssey Arena in Belfast and Nelson Mandela’s visit to Galway in 2003.  Lucia is a qualified vocal coach.

Hayley Jo Murphy, holder of a degree in professional musical theatre performance, took the stage for the first time at the age of  5  in the pantomime  Puss’n’Boots  alongside  Twink and Dustin,  at the  Olympia  Theatre,  Dublin. She went on to train in acting, singing and modern  Jazz at the Adele King Theatre School (AKTS).     At the age of  18, Hayley-Jo was offered a place on the BA course in one of the top performing arts colleges in  London,  Bird College of Musical Theatre and Dance. Here she trained in singing, acting, ballet, jazz, tap,  contemporary and commercial. Hayley Jo will play Lead Role in this year’s Panto at University Concert Hall, Cinderella.

Musicians joining Brian include Paul Moore, bassist, born in Dublin into a musical dynasty that is world renowned.  Paul’s uncle Butch (Moore) was the 1st person to represent Ireland in the Eurovision song contest in 1963.  Paul has performed and recorded material with artists as diverse as The Chieftains, Katie Melua, Julie Feeney, Ronnie Drew, Mark Knopfler of Dire Straits, and — for almost the past decade — the legendary Van Morrison.  He is the first call Bassist for the RTÉ Concert Orchestra and Electric Bassist for the RTÉ Symphony Orchestra. He has worked on a range of movie soundtracks and has played live bass for a run of successful stage musicals, amongst themWest Side Story, Singin’ In The Rain, Les Miserables, Chicago, Wicked, Meet Me in St. Louis, Bugsy Malone, Oklahoma!, 42nd St and much more.

Paul performed with the National Symphony Orchestra at the ceremony marking Queen Elizabeth’s state visit to Dublin, and again for Irish President Michael D. Higgins’ visit to London, performing at Céiliuradh, the celebration of Irish culture which took place at The Royal Albert Hall.

Add to that his life works with Eddi Reader, Sinead O’Connor, Alex Chilton, Elvis Costello, Rita Coolidge and countless other international talents and it’s very apparent how highly thought of Paul Moore is in the world of professional musicians.

His father Des is one of Ireland’s top session guitarists. Cousin Jake now plays guitar with Niall Horan and uncle Tom is of the famous Fleadh Cowboys.

Nigel Clark (Hue & Cry, Gloria Gaynor) is one of the UK’s top acoustic guitarists. Born in Scotland he began his professional career at the age of eighteen in London. He now lives in Dublin Ireland.  Nigel has recorded and toured for ten years with Dutch jazz violinist Tim Kliphuis’ groundbreaking classical/folk/jazz trio.  In April 2017 Nigel with the Tim Kliphuis Trio played for the Dutch royal family at a televised concert for the king’s birthday celebrations.

Ryan Quigley (trumpet) Ryan Quigley is one of the most in demand lead and jazz trumpet players in the UK as well as a highly regarded composer, arranger and educator. Credits include Quincy Jones, Aretha Franklin, George Michael, Robbie Williams, Tom Jones, Bob Geldof as well as numerous Symphony and Concert orchestra appearances in Ireland and UK.

Guy Rickarby Originally from Leeds, Guy studied violin at the Royal Scottish Academy of Music and Drama, sneaking out at night to do jazz gigs on the drums.   Since moving to Dublin he’s played live and recorded with Van Morrison, Roger Daltrey, Eleanor McEvoy, The Devlins and Juliet Turner.  He’s also performed live with The Chieftains, Andrew Lloyd Webber, Brian Kennedy, Duke Special, Gavin Friday and the RTÉ Concert Orchestra.  More recently, Guy has been involved in live radio broadcasts with Sharon Corr, Imelda May and Sharon Shannon.

GOLDENHAIR will take place at the University Concert Hall, Limerick on Saturday, October 28 at 8 pm. Tickets cost €28 and concessions €25 and can be bought by calling 061 331549 or online at www.uch.ie. (Booking fee applies).

To find out more about the GOLDENHAIR click here