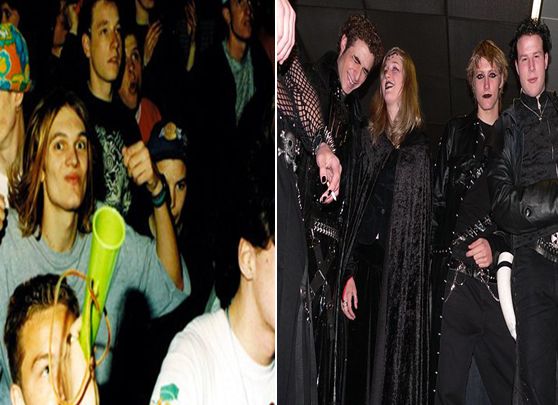 The year was 1993. The place was Limerick City. A town divided. Brothers against brothers, sisters against sisters, neighbours avoiding eye contact when they walked past each other on the street. Blood had yet to be spilt, but there was a storm brewing. A storm of hatred, prejudice and opposition. If you’re a young person reading this, you may not know what I’m talking about. Whispers of battles past dance between the lips of those who witnessed the tension, while those involved simply wish to get on with their lives in peace. It was the mid-nineties, and to some, it was their Vietnam. I’m referring, of course, to the heartbreaking battle between Limerick’s Goths and Ravers.

In the interest of full disclosure, I was, and still am, in some way or another, affiliated with the Way of the Goth, but I’m a grown-up now, so I’m able to put my differences aside in the name of presenting this hidden history of our beautiful city. I’m almost certain I am. Definitely. Sort of.

Firstly, the term ‘Goth’ encompassed anything deemed ‘alternative’ in terms of style of music and the associated fashion. Grunge, Punk, any genre of metal, hippy acoustic guitar-playing Neil Young afficionados, Cureheads, anything dark, forboding and/or depressing – all were under the ‘Goth’ umbrella when it came to being verbally abused by a Raver.

The term ‘Raver’ implied anything with a thumping repetitive beat and a one-line chorus, or Techno, Deep House, Trance, Clubland, any CD comilations that had the word ‘Ibiza’ and ‘mix’, diluted forms of Jungle, and lots and lots of Gangsta Rap. The more aggressive and misogynistic, the better.

Similarities between both tribes: High numbers of blank cassette exchange within the confines of the tribe, containing whatever albums others had that you wanted. (If anyone under 25 wants to know what a blank cassette is, go to Wikipedia). Some of the more talented tribe members would even decorate the inlay covers with the logo of the band / bands involved, usually with a black biro. Somewhere in my spare room, I still have a copy of Metallica’s Black Album with a friend’s hand-drawn (yet lopsided) Metallica logo done using a black fountain pen. Curly snake in the corner and all. Both tribes had big love for the blank tapes.

The females of the tribes had their own signature look as well. While most of the fashion on both sides was unisex, there were also the more feminine options if you were so inclined. Raver girls wore tight t-shirts with yellow smiley faces, rainbows, or black with neon striping – a favourite was tight Adidas T-shirts with baggy tracksuit bottoms. Puffa jackets, sleeves optional. No generic brand trackies either, they had to be Adidas, Lacoste or Kappa, to name but a few. Jeans had to be baggy in the leg but fitted perfectly at the waist, showing off a pierced belly button – and they had to own AT LEAST thirty-five string vests in various colours. Hair was poker straight, Sun-In highlights were the thing to have, or a scraped-back forehead-stretching ponytail, the higher-up the better. Velvet scrunchie on the wrist was mandatory, whether you needed one or not.

Goth girls had a wide range too, extending from the same uniform as their male counterparts all the way to looking like a full dominatrix. Fishnet tights were de rigeur if you wanted to wear some class of a short skirt, a dark tartan pattern being the biggest splash of colour you could apply. Band t-shirts, cut in various places like at the sleeves or the neckline if they were too big (sometimes it was difficult to get them in a girl size). Lots of studded leather cuffs and dog collars, crucifixes, mood rings, lots of steel and ‘silver’ chunky rings that had skulls, dragons and some class of a shiny black stone in them. There was also the long black skirt (Modesty did a roaring trade back in the day. God I miss them), Doc Martens or New Rock boots, oversize metal T-shirts, and red & black flannel shirts either worn open or tied at the waist, depending on time of year. Long black hair was preferable, but if you were lucky enough parent-wise to get away with Stargazer or Crazy Colours, you’d see the occasional washed out blue or green over-bleached blonde barnet among the members.

Nobody between the ages of 13 and 19 was immune. If you went to a secondary school in the city centre or surrounding suburbs, you were either on one side or the other. If you wore a black woolly hat, it either said Slayer or Stussy. If you wore jeans, they were either skin-tight and faded black with torn bits and an Iron Maiden patch on the arse, or they were Joe Bloggs, and were so baggy they looked like two denim sleeping-bags sewn together. Your outdoor clothing of choice was either a denim or a leather biker jacket purchased from Modesty after weeks of saving, or a giant Naf Naf jacket to go with your giant jeans.

In the days before mobile phones (yes there were such days), the Goths would hover around Todd’s (now Brown Thomas) from a predetermined time on a Saturday (usually around 1pm), sitting on the ground, leaning against the windows in groups of three or more, hugging every member of their tribe that showed up with an enthusiasm only usually ever witnessed when long-emigrated relatives step through the arrivals gate of Shannon on Christmas Eve. It should be noted that most of this tribe would have seen each other either in school the day before, or as far back as the previous Saturday, so you can imagine the pain of separation would have been almost too much to bear.

Arthur’s Quay park was a favourite hangout of Ravers, as was outside HMV on Cruises St. Goths had been known to frequent this area too, but both tribes mostly kept to themselves, one group around the corner from the other. Historical research has given divided accounts of who eventually claimed full territorial rights over where, as no other official documents were signed apart from The Peace Treaty at a later date. It may be that to this day both tribes claim ownership, but I’m not getting into that. I’m starting NOTHING. Ravers could be seen swarming around ghetto blasters bathing their eardrums in the sweet soothing sounds of bootleg tapes of The Shamen, 2Unlimited, Usura, and classic rap acts like Naughty By Nature, NWA and Snoop Doggy Dogg (to give him his full nineties title).

But the love of loud music from both Goths and Ravers alike was to be the catalyst for the explosive face-off between them. Tune in next time to find out how it all went down!