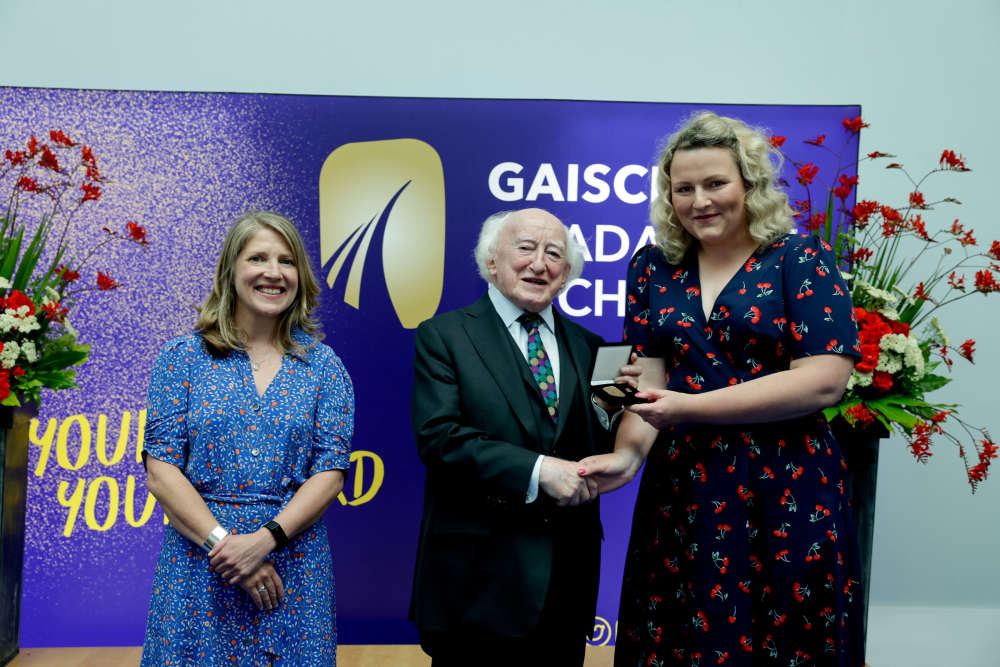 The Gaisce Gold Award is the nation’s highest recognition of a young person’s initiative, achievement, and voluntary contribution to society

Limerick primary school teacher Grainne Ni Dhuinnin has been awarded a Gaisce Gold Award for her commitment to a self-development programme for young people aged 14-25.

Grainne is a 6th Class teacher at Charleville CBS Primary School and is a volunteer leader with Kildorrery 22nd Scout Group. She volunteers with Limerick Animal Welfare for a few hours every week, spending time in the kennels and feeding the dogs.

The teacher won the coveted accolade in recognition of her outstanding and inspirational contribution to society.

Grainne Ni Dhuinnin was one of 79 young people from across Ireland who were commended at the first in-person Gaisce award ceremony in two years due to the pandemic. The three-tiered president’s award was established in 1985 and almost 250,000 awards have been presented to young people since.

The Gaisce Gold Award is the nation’s highest recognition of a young person’s initiative, achievement, and voluntary contribution to society. In order to receive a Gold Gaisce award, recipients must set and achieve their own goals across challenging areas that include personal skill, physical activity, team adventure, community involvement and a residential project.

A new programme has also been unveiled, as Gaisce launches Gaisce Gold Voices Community which will encourage all Gaisce Gold Awardees from the previous 35 years to get involved and renew their commitment to promoting Gaisce values to new generations of young people.

“Gaisce – The President’s Award is unique in the sense that it encourages young people to set their own personal development goals within a framework that allows them to achieve them and contribute to their communities in their own way,” CEO of Gaisce, Yvonne McKenna said.

“Every single day, I am inspired by the courage, the energy and the commitment of young people doing their Gaisce Award, and I am so thrilled we are getting to celebrate the breadth of their achievements, from tackling global challenges like biodiversity to local supports for neighbours in need, young people are consistently pushing themselves for others.”

For more information on the Gaisce awards go HERE