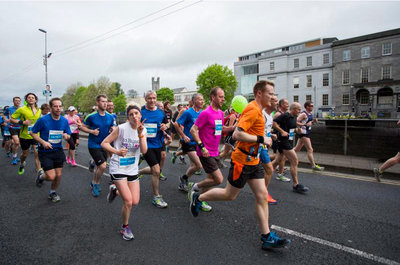 As part of the festivities happening throughout the Bon Secours Hospital Great Limerick Run, a returning key event is the Great Limerick Run bands, a feature of the run that has been running nearly as long as the main event itself.

One of Ireland’s mass participatory sporting events, The Bon Secours Hospital Great Limerick Run 2018 is taking place this May Bank Holiday weekend, Saturday and Sunday, May 5 and 6.

Speaking about the band’s feature of the run, Caolan Maloney of The Bon Secours Hospital Great Limerick run spoke of the several different reasons for the music throughout the course, “The first being the energy it brings to the route. We believe that it really aids the runners [and] gives them that extra life that they could possibly be lacking and needing,”

Not only will the runners be able to enjoy the music throughout the running course, but the music will be available to be enjoyed by onlookers also, making the event more open to the public, “The event is not only for the runners but for our spectators also, we want to bring a real festive mood around the city and a quiet course just wouldn’t be okay,” added Caolan, “The Bon Secours Hospital Great Limerick Run is about showcasing our city and what is great about Limerick.”

Throughout the course there will be thirteen massively talented Limerick-based musical acts, from bands to solo artists, and a fair share of DJs doing sets also!

Wedding band, Acoustra will be on track on the day, with band members Dylan Shine, Liam McCarthy and Pat Wright, all hailing from Clare who said it felt “great to be part of such a big event for Limerick City.”

19-year-olds Aaron Moloney and Liam Byrd, the duo behind Elenay music are another up and coming Clare band that will be playing on the Bon Secours Great Limerick Run course are both very “happy to be involved with such a big event in Limerick,” and having played last year are hopeful of more success.

The Limerick Gospel Choir are based in Limerick, and have approximately 30 members from the ages of mid 20’s to over 60’s with members that are local and abroad, such as Africa, Hungary, Serbia and Denmark, “to name but a few.”

Solo artists such as Stuart Bond, Anna’s Anchor and Fintan Maloney will also be sharing their musical talent to the runners and onlookers of the Bon Secours Great Limerick Run. Annacotty native, Marty is behind the creation of Anna’s Anchor, a solo project “for the most part… sometimes we’re lucky enough to tour full band,”. Marty is also a returning artist to the Great Limerick Run Bands, having played three years in a row previous, “It is lovely to be asked back and be a part of it each year, as a proud Limerick man, I’m delighted to play any part.”

DJ sets from DJ Kash, DJ Patrick Kelly, Pa Dunne, DJ Tom Cussen and DJ William Russell will be held throughout the running course on the day. 22-year-old Tom Cussen from Galbally will be returning to the Great Limerick Run Bands for a DJ set for his third year running and speaks of how it’s a “great opportunity to DJ for such a crowd on such a big day in Limerick!”