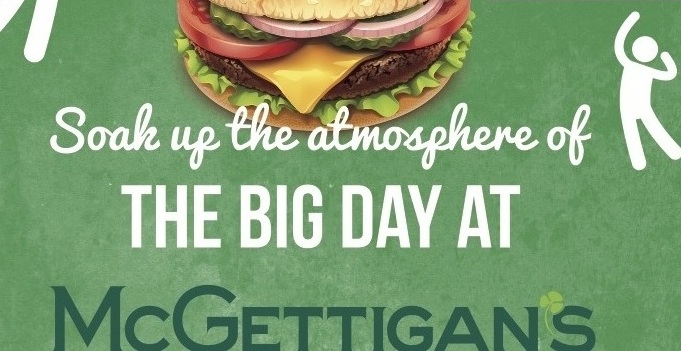 Great Limerick Run McGettigans Afterparty – Come for the run and stay for the fun at McGettigans.

This year the Barringtons Hospital Great Limerick Run has teamed up with McGettigans Irish Pub. McGettigans is set to host this year’s official post event party, ensuring that the fun continues after the run. Offering music all day and night, a great afternoon leading into the night to all those who have taken part with great food and drink specials.

International brand McGettigans is located in Limerick City Hotel on Lower Mallow Street. McGettigan’s Limerick is one of the seven McGettigan’s Irish Pubs in Europe and the Middle East.  McGettigan’s tagline “The Modern Irish Experience” is delivered through unique décor, modern Irish food and drink, the best Irish and international entertainment and major live sporting events. McGettigan’s Limerick opened in June 2014, the opening night was very well attended and garnered substantial attention and exposure from local media and public figures. The bar is open daily serving lunch, dinner and an extensive drinks menu including a range of carefully crafted signature cocktails, which are especially popular on ladies night, taking place every Thursday.

The 7th Annual Barringtons Hospital Great Limerick Run, is set to take place this coming May. Now one of Ireland’s largest mass participatory sporting events, this year’s race is expected to exceed last year’s participant numbers of 14,200 based on the current increased level of early registrations that have taken place with nearly 2,000 already availing of early bird discounted race entries over the three race distances.

All participants are welcome to attend McGettigans, to party and celebrate the hard work that has gone into preparing for the Great Limerick Run.

Use the hashtag #McGettigansLimerick on the day for all your social media photos and be in with a chance to win a cocktail!