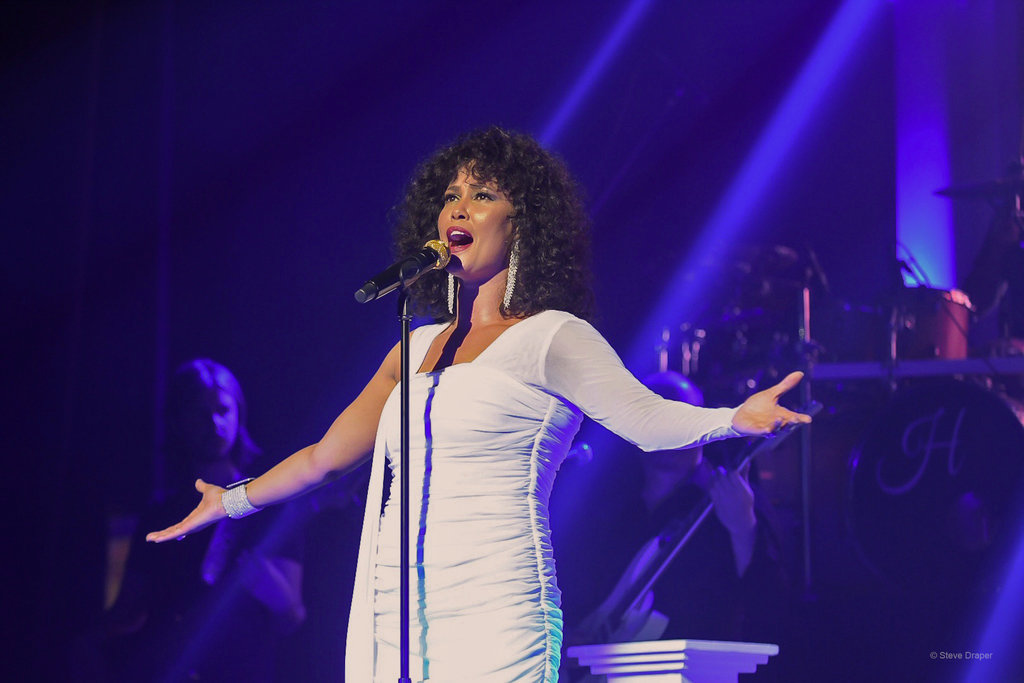 Greatest Love of All – A Heartfelt Tribute To Whitney

Belinda Davids as Whitney Heuston in the Greatest Love of All

Greatest Love of All – A Heartfelt Tribute To Whitney

This breath-taking production, featuring the impeccable vocal talents of South Africa’s Belinda Davids, returns to Limerick by huge popular demand following its sell out performance in 2017! In this beautifully crafted tribute to one of the world’s most revered singers, Davids, accompanied by a full band and dancers, performs over two hours of Whitney Houston’s best loved hits live on stage and there is no person better equipped to do so!

In addition to having a voice described as “jaw-droppingly similar” to the pop diva, Davids openly acknowledges that Houston is her personal idol and was the original inspiration for her own career when she began singing at the age of 14. “I want people to come and remember Whitney when she was at the top of her game and when she was fabulous”, says Davids.
Davids, starring in The The Greatest Love of All: A Heartfelt Tribute To Whitney is the culmination of a life-long connection with the superstar to whom she pays homage.

Davids beat almost 15,000 other hopefuls to take on the role and it was her own eternal love of Whitney that prepared her for the show. Exposed mainly to R&B and gospel as a child, Davids was innately drawn to Houston’s musical style. Singing professionally from her early teens, Houston songs became a fixture in Davids’ live shows. “I think I’ve sung at least one Whitney track in almost every live show I’ve ever performed,” says Davids.

Though she eventually carved out a successful career as a chart-topping solo artist and a session vocalist for such artists as The Temptations, Keri Hilson, Keyshia Cole, Monica and Johnny Gill, in her earlier days Davids encountered resistance from many industry professionals who were unsure how to work with her because she looked and sounded so exactly alike Houston.

The ultimate realization of Davids’ affinity with Whitney occurred during a show in Hong Kong. Following a recital of ‘I Will Always Love You’, the audience was so astounded by her performance that they demanded she sing acapella to prove she wasn’t lip-syncing to a Whitney track.

Now representing her idol on stage, Davids feels destined: “I’ve essentially prepared my whole life for this show and I feel privileged to be able to honour Whitney in such a way.”

People all over the world have done exactly that, with South Africa, New Zealand, Singapore, Canada and the USA hosting sold-out performances in the show’s first two years of touring.

The show includes 20 of Houston’s most popular tracks taken from the full span of her career, including ‘I Will Always Love You’, ‘I Wanna Dance With Somebody’, ‘Didn’t We Almost Have It All’, ‘I’m Every Woman’, ‘Exhale (Shoop Shoop)’, ‘Million Dollar Bill’ and more.

“The soul of Whitney Houston is not only alive on the Mandela Stage but its effortless, mesmerizing and in full voice. Don’t believe me? You will.”- Rave Review

“The iconic Egyptian-like shake of the head, the smile, the clicking fingers and open arms that accompany the countless high notes, all attest to David’s knowledge of the character is she portraying.”-DestinyConnect.com

For more stories about events in UCH, click here.