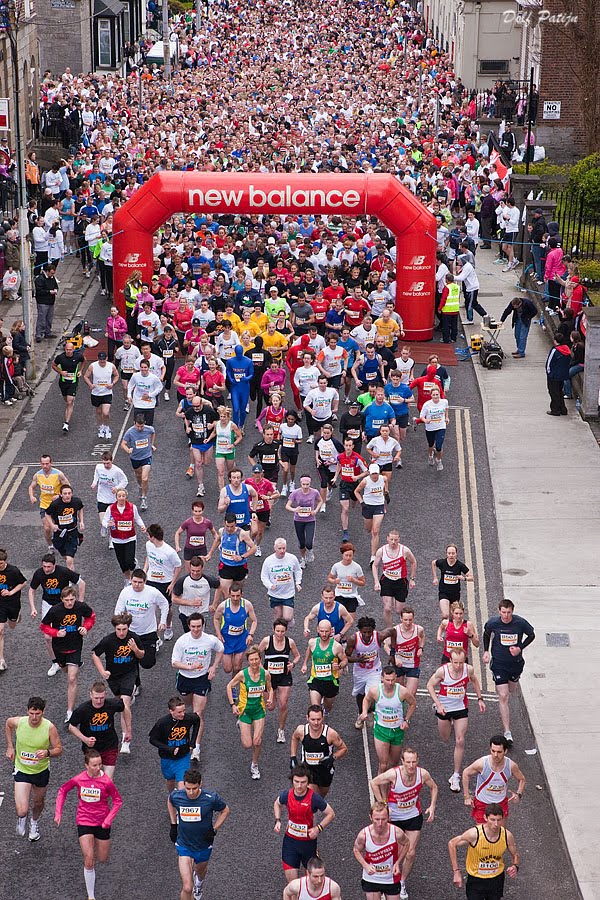 More reasons why the Great Limerick Run is so great….

More reasons why the Great Limerick Run 2014 is so great….

This year the 5th Barringtons Hospital Great Limerick Run 2014 takes place on Sunday May 4 in Limerick City. Stretching over 42km, the run aims to encourage and promote healthier lifestyle choices amongst the people of this year’s City of Culture.
Speaking to the Race Director John Cleary, he highlighted the importance of making people aware of the benefits brought about by the run and in particular, why the people involved should be proud of the city they live in. It was clear to me that the people of Limerick are unaware, as I was myself, of the fantastic work carried out by the Barringtons Hospital Great Limerick Run’s organisers and just how much they do to encourage as many as people possible to get involved on the day.
Last year, nearly 1,500 primary school students took part in the UL Sport Kids Run, which is held on the day previous to the main run. For each child that takes part, there is an entry fee of €12. The organisers at the Barringtons Hospital Great Limerick Run then give €5 for every young entrant back to their school for equipment and supplies. This generous and encouraging aspect of the children’s race allows every young athlete to feel proud that they can give something back to their school. It also gives those at the Barringtons Hospital Great Limerick Run a chance to give back to their community through this prestigious event. Speaking to John about the children’s run, he mentions the increasing incidences of obesity in young children in Ireland. He feels that the Run is “a fantastic opportunity to highlight exercise and sport as positive outlets for the children of Limerick”. John and his team are visiting schools with the support of the Limerick Sports Partnership around the city in order to further promote children’s participation in the race. Leaflets are given out in schools across the city, which contain all the necessary information for these young people about how they can enter. Inside these leaflets are car stickers, which children can encourage their families to use in the months coming up to the race. Each week, for car owners who present these stickers, Live 95fm hold a draw in which the owners can win amazing prizes. This ultimately encourages family and friends to take part on the day and run alongside their children in what John describes as “the biggest children’s event in Ireland”. The UL Sport Kids Run at the Barringtons Hospital Great Limerick Run 2014 will take place on Saturday the 3rd May.

John Cleary also spoke to me about the numerous associated novelty aspects for adults on the day of and in preparation for, the Barringtons Hospital Great Limerick Run. The involvement of the run’s sponsor, The University of Limerick, has been extremely beneficial in terms of providing facilities such as the UL Sports Arena to host our international Expo. Last Saturday, the Barringtons Hospital Great Limerick Run held their monthly event, “Marathon Mission“, which aims to prepare and train those who hope to take part in the race. Completely free of charge, the organisers hope to increase the number of these “training clinics” to at least once a week so as to encourage more and more people to get involved through this fantastic training outlet. In particular to the young people taking part in the run, John talks about what the University of Limerick can do for them. “I want people to see the University of Limerick not just as a place of educational opportunity, but as a place of lifestyle choices and sport.”

Last year, the Barringtons Hospital Great Limerick Run was an incredible outlet for breaking World Records and hopefully could continue on for this year’s event. Unknown to the majority, in 2013, the first prosthetic relay team completed the run. Gearóid O’Briain who completed the marathon with a 20lbs bag on his back broke another World Record in record time.

This year will also see, the introduction of “The Fittest Company Challenge”. Supported by Holmes O’Malley Sexton and the Limerick Chamber of Commerce, the idea behind this challenge is that for every one mile your company completes, they receive one point and the company with the most points at the end of the run, wins. On May 4, 30 employees from Action Point hope to take part in the Barringtons Hospital Great Limerick Run as a team and raise as much money as possible for Special Olympics Ireland. Like Action Point, your company can take part in the “Fittest Company Challenge” and attempt to win it for your workplace!

The featured  charity for 2014 is Special Olympics Ireland. The vital funds raised through your participation in the Great Limerick Run for Special Olympics will greatly benefit the athletes and the future of the Special Olympics programme and the 2014 Special Olympics Games will take place in Limerick from Thursday 12th to Sunday 15th June. For a fundraising pack please contact the team at [email protected].

Barringtons Hospital Great Limerick Run is undoubtedly a fantastic opportunity for people to get involved in a large community-based mass participation event. Not only does the run promote positive lifestyle choices but also promotes the equally important aspects, charity and enjoyment.  I would encourage the people of Limerick to get involved and like the organisers, do their utmost to give back to the community. If you want to get involved with this year’s Barringtons Hospital Great Limerick Run either as a volunteer on race or participating to experience crossing the finish line on O’Connell Street, simply visit the website www.greatlimerickrun.com or follow their Facebook and Twitter for more updates.