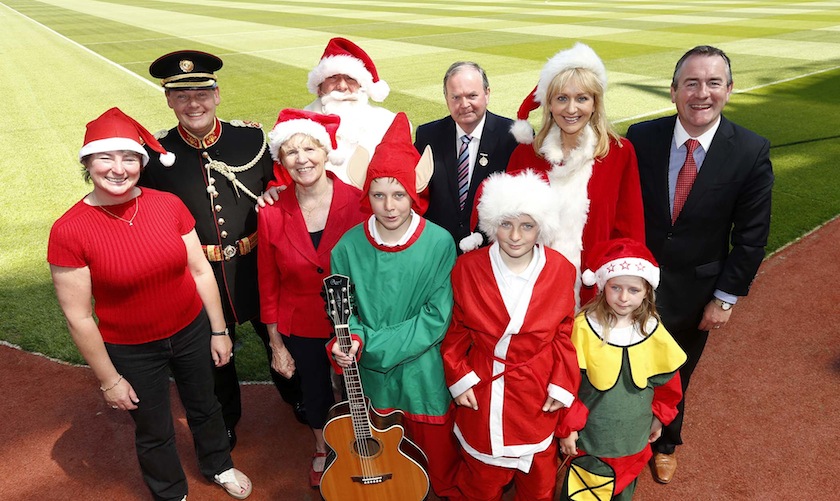 ‘Stars, Choirs & Carols’ will see over 500 choirs gather together @ Croke Park, in aid of Cliona’s Foundation and The Sanctuary

A charity Guinness World Record attempt to become the world’s largest group of Christmas Carol singers is scheduled to take place on the 19thDecember 2013 in Croke Park Stadium in Dublin, Ireland. Stars, Choirs and Carols will raise funds for Cliona’s Foundation, a unique charity providing financial assistance for families with critically ill children in Ireland, and The Sanctuary, a charity bringing stillness and harmony into peoples’ lives.

As Patron of Cliona’s Foundation, RTE broadcaster Miriam O’Callaghan will lead the record breaking event. ‘Stars, Choirs and Carols’ will see Croke Park transformed into a winter wonderland as over 20,000 people try to break a Guinness Book of Records for the most people singing Christmas Carols together.  Speaking about ‘Stars, Choirs and Carols’, Miriam O’Callaghan said: “Stars, Choirs and Carols promises to be an unforgettable festive evening of carols and fun while at the same time helping to support the work of two unique charities – all performing Christmas favourites, old and new. Cliona’s Foundation which gives a financial lifeline to families with a critically ill child and the Sanctuary which brings peace, calm and hope to the lives of thousands of people including the most vulnerable young people in our society”

Taking part is easy whether you are part of a choir or you would like to come along break the record and enjoy the music. Simply log onto www.tickets.ie, tickets cost €15. A host of stars are lined up to help break the record including Louis Walsh, Lisa Hannigan, The Celtic Tenors, soprano Celine Byrne, the Dublin Gospel Choir, RTÉ’s Cór na nÓg, Tallaght Choral Society and a 60 piece brass band – The Army Number 1 band. And in true Christmas Spirit Irish Rail have agreed to a special offer of €19.99 return from anywhere in the Republic on their mainline trains on December 19 for adults and €9.99 return for children under 16 but tickets must be purchased online before November 22.

Stars, Choirs and Carol is the brainchild of Richard Mulcahy who appeared on RTE’s Secret Millionaire in 2012. Richard spent ten days in Limerick undercover. He spent time with various organisations and charities and was so inspired by the Cliona Ring Foundation he decided to dedicate his time to help raise funds for the charity.

Croke Park through the auspice of the Gaelic Athletic Association has generously given the stadium free for this worthy cause. Association President Liam Ó Néill lent his support to the venture and lauded those bidding to enter the Guinness Book of Records.

To find out more about ‘Stars, Choirs and Carols’, Cliona’s Foundation and The Sanctuary, please visit www.starschoirsandcarols.ie, www.clionasfoundation.com, www.sanctuary.ie.

Cliona’s Foundation is a remarkable Irish charity set up in 2007, by Limerick couple Terry and Brendan Ring, following the death of their daughter Cliona, from a brain tumour.  Over the years, as Cliona underwent numerous different treatments in hospitals around the country, Brendan and Terry were struck by the number of families, facing enormous financial hardship, on the brink of financial free-fall, blindsided by non-medical expenses piling up and already struggling to cope with the nightmare of a having a seriously ill child.  They saw at first-hand the enormous toll it took on these families, already struggling to cope with the nightmare of having a seriously ill child. They decided to take action and set up Cliona’s Foundation, in honour of their daughter, a charity that uniquely provides financial assistance to families with critically ill children. Since its launch, Cliona’s Foundation has raised in excess of €400,000 and has helped more than 150 families. It is Brendan and Terry’s intimate understanding of the stress brought upon these families that explains the diversity of expenses covered by Cliona’s Foundation – from rent, food and utility bills to transportation for chemotherapy or alternative therapies, a treat for a sibling and even covering the cost of a child’s funeral. An estimated 1,400* children are living with life-limiting conditions in Ireland.  The ordeal of a child’s grave illness or injury tests families far beyond their endurance, taking an enormous toll emotionally, physically and financially. Cliona’s Foundation wants to help these families to cope and soften their heartbreaking journey, providing financial support, when all other resources have been exhausted.  Cliona’s Foundation believes that no family should have to face any added financial stress, when already struggling with the devastation and trauma of a seriously ill child.

Founded by Sr. Stanisluas Kennedy, the Sanctuary is a meditation centre in Dublin’s city centre. Its vision is to be stillness in the world. In our stressful, frantic world the Sanctuary brings peace, calm and hope through its programmes, courses and activities offered to thousands of people of all ages, including some of the most vulnerable young people in our society.

Croke Park has been at the heart of Irish sporting life for over a hundred years. Boasting a capacity for 82,300 people, the stadium is the home of Gaelic games and the headquarters of the Gaelic Athletic Association (GAA).

About The Current Guinness World Record

The current Guinness World Record for the largest group of carol singers in one place stands at 15,100 people in Seoul, South Korea on the 25th December 2010.