By Richard Lynch on January 19, 2018@richanthon 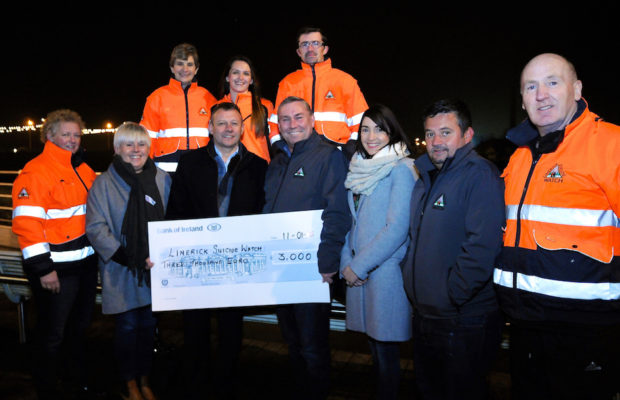 Limerick Suicide Watch is a group of volunteers who patrol the four bridges of Limerick City at night time.  The group’s main focus is to keep eyes on the river and bridges and identify and provide support to those in distress and who may be contemplating suicide.

Presenting the cheque, John Fitzgerald of Harmonics said, “One of our core values at Harmonics is making a difference and this year our team decided we wanted to help the volunteers of Limerick Suicide Watch with this donation.”

“As a Limerick headquartered business, we see these volunteers make a huge difference in patrolling the four main bridges in Limerick city for those who are distressed or suicidal. We meet a lot of people each year who are incredibly stressed when their role is made redundant. Our role through career, personal and financial coaching and advice is to help them bridge the gap between one job and another.”

“This is often the most challenging times of their lives when they have lost their previous identity and they feel out of control. We are often the only people they feel they can speak to openly and honestly about how they feel without feeling judged. This charity partnership with Limerick Suicide Watch for 2018 makes sense for us all on the team at Harmonics. They are an amazing bunch of people who really make a difference”, he continued.

Accepting the cheque on behalf of Limerick Suicide Watch, Ger McNamara said, “Limerick Suicide Watch would like to express our gratitude to Harmonics for their generous donation to our group. We could not operate successfully without such generosity from the public and companies like Harmonics. All donations we receive are used to supply our volunteers with the necessary training and life saving equipment required to patrol safely and also for the maintenance of our equipment such as bikes and radios and the upkeep of our base.”

Harmonics specialises in helping organisations plan for change, manage change and support their people through change.  The company works with many of Ireland’s leading organisations across all sectors from financial services, pharmaceutical, consumer, telecommunications and software, as well as public sector clients and Universities.  Harmonics has a nationwide team of over 30 people with offices in Dublin, Cork and Limerick.