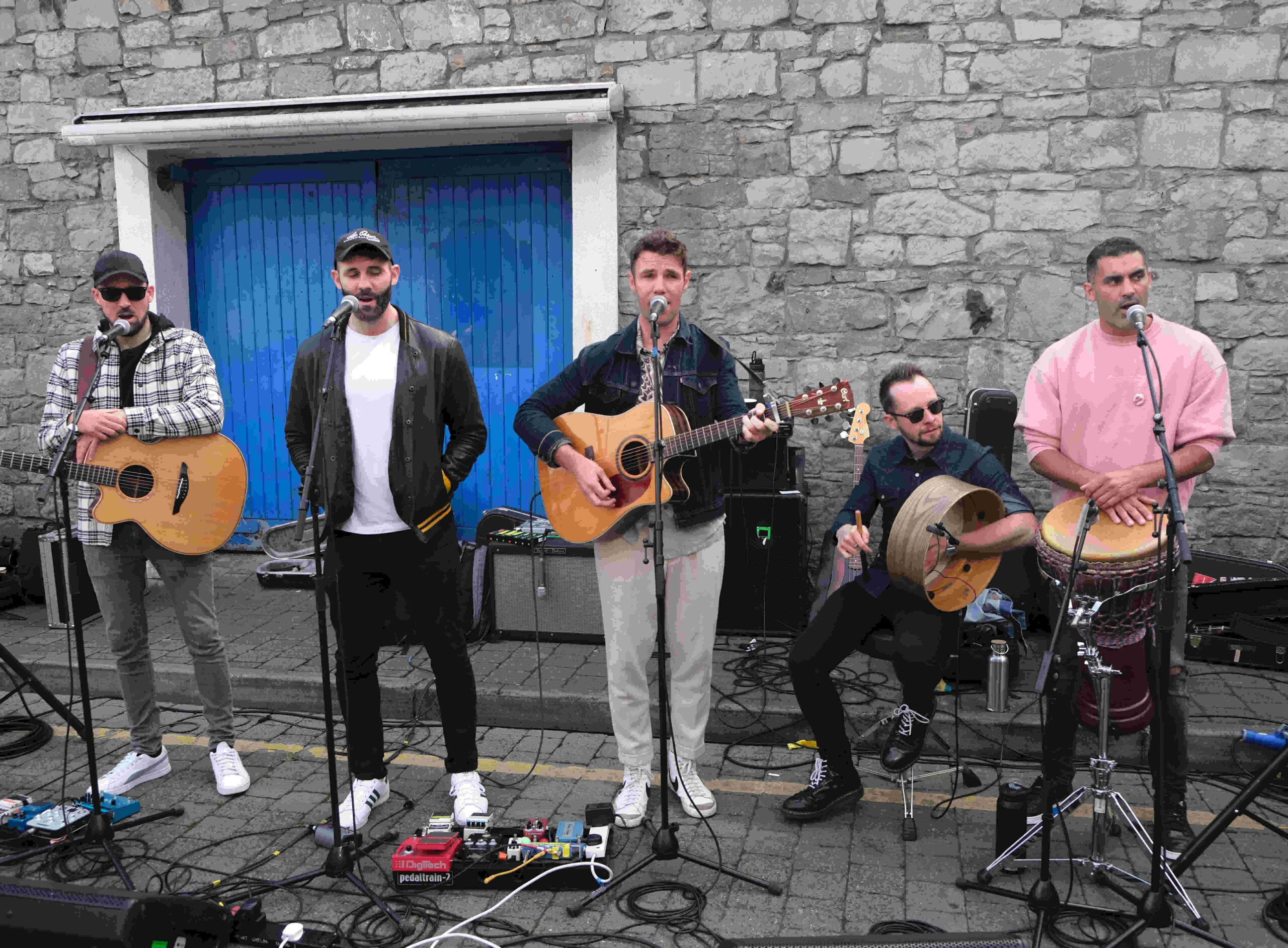 Limerick band Hermitage Green have returned with pop-centric new album ‘Hi Generation’, which they launched at a surprise gig outside the Limerick Milk Market this past Saturday morning.

The band teamed up with Limerick’s Steamboat Music to treat the city to a Culture Weekend special.

Mark Carey, general manager of Steamboat Music, told I Love Limerick how the idea came about.

“Steamboat has a massive tradition of supporting and promoting music in the city via our record/instrument store on Steamboat Quay. Since we reopened after the pandemic, we have tried to help as many artists as we can to launch their new music,” he explained.

“We’d been in discussion with Hermitage Green about doing something to celebrate their new album here in Limerick that would mean something special to them. The idea of getting back to their roots and performing for a massive, public Limerick crowd was suggested.”

Green Acres Cafe at the Milk Market came forward to offer the band use of their outside space, while Murt Whelan of Murt Whelan Sound provided a PA system for the event.

The band performed three sets to a busy Saturday market crowd, who gathered round to see the Limerick lads play a few tunes.

Thanks to everyone who came out & celebrated our album launch with us yesterday. These days need to be marked & this one could not have been better. Good vibes is an understatement. Massive thanks to @MurtWhelan @SteamboatMusic @mydolans Green Acres cafe & @MarkHengArtist pic.twitter.com/wqlqPeMHWJ

“The response was incredible. I reckon that over the course of their three sessions that morning, between 3,000 and 5,000 people heard Hermitage Green play,” said Mark Carey.

“Not only that, but within three hours their new album Hi Generation had become Steamboat’s fastest ever selling album – a testament to how great the new release is, and how loved the band are in their home city.”

The band will begin their Hi Generation album tour next month, which includes an outdoor concert Live at the Big Top at Limerick’s Milk Market on Thursday, December 30th.

Formed in 2010, Hermitage Green have built a dedicated legion of fans across the globe thanks to their energetic and captivating live sets. Playing gigs in South Africa, Australia, New York, Dubai and London, the band have graced stages with the likes of Lewis Capaldi, Bastille, Tom Odell and Gavin James to name but a few.

For tickets to the Hi Generation tour go HERE