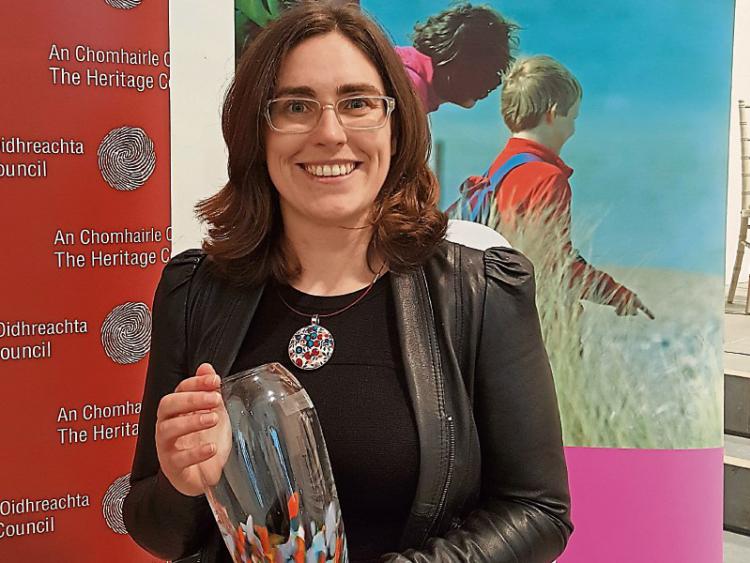 Historian Sharon Slater, a Limerick historian has been honoured with the grand award of the Council’s Heritage Hero 2017 at the medieval Mile Museum, Dublin.

The Heritage Council’s Heritage Hero Award celebrates someone who has made an outstanding contribution to the protection and promotion of heritage in Ireland.
This year’s winner is historian Sharon Slater from Limerick. Sharon has worked tirelessly over the years in local history research in Limerick. As well as writing books on Limerick’s history, she established www.limerickslife.com in 2004, an unparalleled treasure trove of Limerick history from rare images to untold stories of Limerick’s people and places. Sharon devotes her time to heritage in the community from local heritage projects with Limerick Fishermen to leading bicycle tours! Sharon brings history to life for the people of Limerick and is a worthy recipient of the Heritage Hero Award.

Out of a list of 122 entries, Historian Sharon Slater was honoured with the award. She received the accolade at the Medieval Mile Museum for her amazing contribution to protecting and promoting all the heritage in Ireland. She was commended for “bringing history to life for the people of Limerick”.

Sharon is currently working with the Limerick Chronicle newspaper archiving Limerick’s history. Sharon told the Limerick Leader that “They let me know that there a few people who put my name forward. I would like to thank them for taking the time to do that. Limerick history has been my passion for such a long time that I cannot remember when I wasn’t interested in it.”

“Luckily I am standing on the shoulders of giants when it comes to history in Limerick, from John Ferrar who wrote the first history of Limerick in 1767 to the incredibly prolific historians such as Kevin Hannan and Jim Kemmy.”

“Luckily when I began my research too long ago to mention there were a number of helping hands to guide me along the way, without the likes of Frank Prendergast I would have stopped researching a long time ago. Limerick is unique when it comes to history and how it can be accessed, this is down to the likes of the Limerick Library, Limerick Museum and Limerick Archives who have put large portions of their collections online.”

“This has made my work as a historian a lot easier than it would be if I had fallen in love with the story of another city. From the coal holes to the cathedrals Limerick history is everywhere and for me, it has been a pleasure to explore it.”

Below is a video from Sharon’s early days with her website and showcases just how much she cares about Limerick’s history.

For more stories on the Sharon Slater, click here.