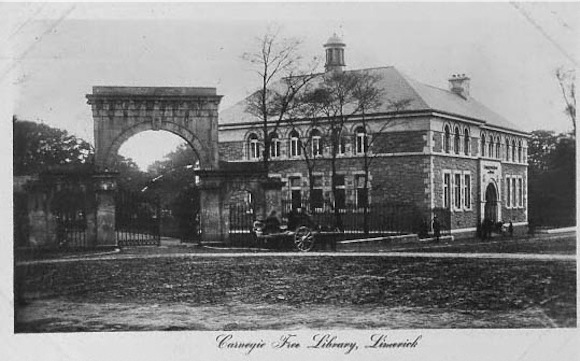 Free talk on history of the Carnegie Building

On Saturday 4th October, Historian Dr. John Logan will give a free talk on the fascinating history of the Carnegie Building, Pery Square. ,  Join us as we uncover the changing roles of the Carnegie Building that now plays host to contemporary art exhibitions and a permanent collection as Limerick City Galley of Art. This talk is followed by a special walking tour, highlighting some of the architectural features of the building and revealing some of the stories they have to share with us.

Places are limited so booking is essential, for further information please contact the gallery reception.

About the Carnegie Building

The historic Neo-Hiberno-Romanesque Carnegie Building, 1906, is located adjacent to the People’s Park and on the 19th century, Georgian styled, Pery Square in Limerick City. The building was funded by Andrew Carnegie (1835 – 1919) as Carnegie Free Library and Museum.

In 1936 a group of prominent Limerick politicians, artists and patrons established the first Limerick City Collection of Art from various donations and bequests. In 1948 an extension to the rear of Limerick Free Library and Museum became the home to the City Collection as the Limerick Free Art Gallery. In 1985 the Library and Museum were transferred to larger buildings. LCGA has since occupied the entire Carnegie Building, undergoing a major renovation and expansion in 1999 and in 2010/11.

In 2008 LCGA celebrated its sixtieth birthday and in 2009 work commenced on the largest addition to the Carnegie Building since its opening a century before. Limerick’s municipal art collection is one of the finest in the country outside Dublin. Fittingly, the seventy-fifth anniversary of its foundation has been marked by the official opening of the newly extended LCGA on 16th January 2012 by Jimmy Deenihan TD, Minister for Arts, Heritage and the Gaeltacht.

In 2012, the Carnegie Building (a protected structure) re-opened with the extended three sides into the People’s Park to house a new storage space for the permanent collection, a café social space, a workshop area and additional public facilities. The scale of the redevelopment necessitated the closure of LCGA for a over a year, during which parts of the collection were exhibited in Istabraq Hall, Limerick City Hall and the Hunt Museum.

For more on Limerick City Gallery of Art visit their website here!