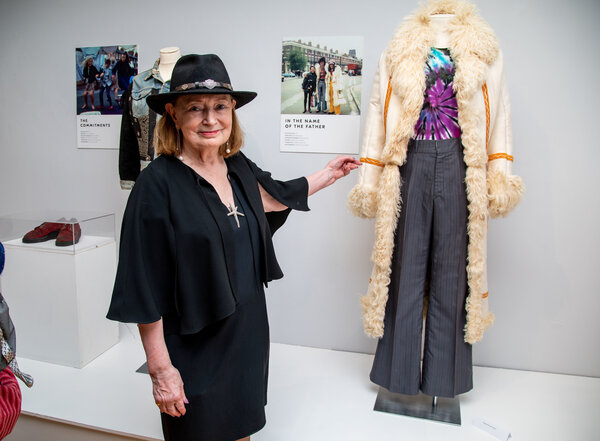 The Hunt Museum has developed a series of educational costume design workshops, lectures and downloadable content for families, students and individuals to complement its current exhibition ‘Best Costume Goes To…’ including a masterclass with award-winning costume designer Joan Bergin.

A joint curation with the Irish Costume Archive Project, ‘Best Costume Goes to…’ tells the story of the relationship between the actor, their costume and the character they portray, as well as the story of the growth of the Irish Film Industry. On display at the Hunt Museum’s iconic exhibition are 35 iconic costumes from films and TV series like My Left Foot, In the Name of the Father, Michael Collins, Breakfast on Pluto, Tudors, Room, The Favourite and Braveheart.

The educational series developed by the museum includes:

This is for anyone who ever wanted to be a costume designer and those budding fashion designers. Bring the whole family along, learn about how costume designers work, and hunt for design details in the Best Costume Goes To… exhibition. Then learn to work as a team of designers to create unique costumes for fictional characters!

Meet one of Ireland’s most established costume designers Eímer Ní Mhaoldomhnaigh, co-founder of the Irish Costume Archive Project (ICAP) and co-curator of the Best Costume Goes To… exhibition at the Hunt Museum. Learn how and why ICAP was set up, its importance to the Irish film industry and plans to develop it in the future.

Join Joan Bergin, three-time Emmy and five-time IFTA award-winning Irish costume designer, to learn about her distinguished career working on well-known TV and film productions, including Vikings, The Tudors, In the Name of the Father and My Left Foot, which are featured in the exhibition (and some which aren’t!).

Entwined in the fabric, is an online compliment to the Best Costume Goes To… The online exhibition highlights the role of the costume designer and the different processes and techniques of the costume department, using many of the Irish Costume Archive Project (ICAP) costumes exhibited HERE.

The online exhibit contains rich content that will be of interest to fashion designers and film buffs alike. Vivid images demonstrate the intricate detail of the costumes from films and TV shows such as The Favourite, The Quiet Man, Braveheart, Vikings, and more. The high-quality images are accompanied with background stories and audio clips narrated by Eimer Ní Mhaoldomhnaigh, costume designer and co-founder of the Irish Costume Archive Project, to give insight into the role of the costume designer and how costume co-creates the character.

Some of the downloadable content will also be featured on RTE Learn – the online hub for all the educational content produced by RTÉ.

Jill Cousins, Director, The Hunt Museum, said, “Education is an extremely important part of our overall offering. Education at The Hunt Museum means using the collection, expertise and enthusiasm of the museum and our partners to provide learning opportunities for the widest possible range of audiences and at all educational levels.” Hunt Museum Classes

Costume design workshop for families at the Hunt Museum, Limerick

About The Hunt Museum

The Hunt Museum exhibits one of Ireland’s greatest private collections of Art and Antiquities, dating from the Neolithic Period to the 20th century. Generously donated by John and Gertrude Hunt to the people of Ireland, this diverse collection is now housed in Limerick’s 18th Century Palladian-style building, formerly The Custom House. For more see HERE

About the Exhibit: ‘Best Costume Goes To…’

‘Best Costume Goes to…’ is an exhibition which explores the relationship between actors, costumes and the growth of the Irish film industry. A joint curation with the Irish Costume Archive Project, the exhibition looks at how costume co-creates the character. In all, 33 costumes representing 19 films and TV series are on display, some of which have been Oscar-nominated. See full list below.

The Irish Costume Archive Project was founded by Eimer Ni Mhaoldomhnaigh and Veerle Dehaene. The Irish Costume Archive Project was initiated to collect, preserve and exhibit Ireland’s film and television design heritage and promote the collections by highlighting their importance as part of our national film culture. Hunt Museum Classes Hunt Museum Classes

For more stories on the Hunt Museum, click HERE

Related Topics:hunt museum
Up Next