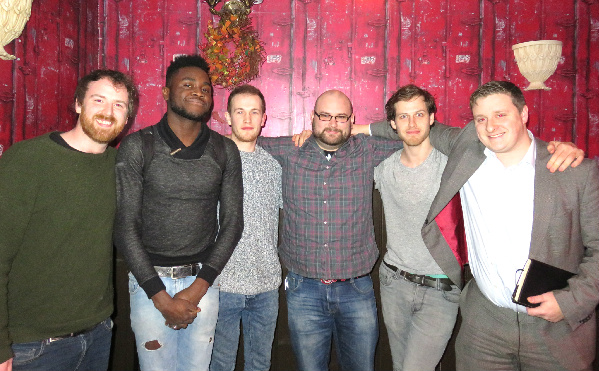 Tuesday, February 7, the Hurlers Comedy Club welcomed Ryan Cullen, one of Irelands most talked about newcomers in comedy and star of the YouTube channel Facts.

On Tuesday, February 7, The Hurlers pub, Castletroy, played host to the Hurlers Comedy Club. The event took place in a back room of this cosy family-run pub which was heaped in history. The room was packed with chairs, benches and bar stools which were promptly filled. The friendly bar staff served out pints and drinks for the acts and audience attending as well as the locals at the other end of the bar.

With the microphone and lights set up, the night kicked off with host Danny Ryan warming up the audience and introducing them to the first act of the night, Emman Idama. Emman got the ball rolling and had the audience in good spirits with his hilarious jokes about primary school and what moving to Ireland was like for him.

Emman was followed up by Oisin Hanlon whose performance began with laughter at the awkward and somewhat creepy on-stage persona he adapted to create a unique and distinctive act. Oisin, while maintaining the persona, told relatable jokes that received pensive but undeniable laughter as the audience did not want to relate but couldn’t deny it either.

After a brief intermission, the second half began. The audience were introduced to the new host, Dr Stephen Ryan, who recently received his PhD. Stephen took to the stage all decked out in his suit with some icebreakers to warm the lively crowd up again after the break.

The audience were then introduced to Kristofer Harte who has been a part of the Limerick comedy scene for 2 years. Kristofer is a member of the UL comedy society and is no stranger to the scholar’s stage for comedy nights. Kristofer also frequents the Treaty open mic nights and has shared stages with Karl Spain and Joe Rooney. Kristofer delighted the audiences with stories of becoming “The man” that Irish mothers threaten their children with. As a mature student, Kristofer was able to humorously horrify the majority student audience with his stories and one-liners.

Stephen Ryan then introduced the audience to the guest star of the night, Ryan Cullen. Since bursting onto the Comedy scene with his subtle blend of dark and intelligent one-liners, Ryan has had nothing but success. The Facts Youtube Channel has over 840,000 subscribers and boasting over 200 million views. Many have commented that Facts is the Irish answer to Buzzfeed. While being frequently recognised from Facts, Ryan who is based in Dublin, is a regular at prestigious clubs such as The Laughter Lounge, The International Comedy Club, Empire Comedy Club, The Stand (Edinburgh, Glasgow, Newcastle). Ryan has won various comedy competitions throughout Ireland and has just returned from his sold-out solo Edinburgh Fringe show.

Ryan is also writer & star of BBC’s Late License which is due to be released in February 2017. Ryan was a writer on RTE’s IFTA Award-winning Republic of Telly and RTE’s Callan’s Kicks.

Ryan was the cherry on top. He kept with the dark humour and tainted jokes which had delighted the audience in previous acts. Ryan used audience interaction and some improvisation which went down very well and he even got hit with some comebacks from the audience but Ryan used his wit and intelligence to fire back. Ryan, as a Dublin man, made his act audience-based and used Limerick humour to relate to the audience.

The night was a huge success and the audience left satisfied and all laughed out. The two-hour set was met with applause and laughter of an appreciative audience.