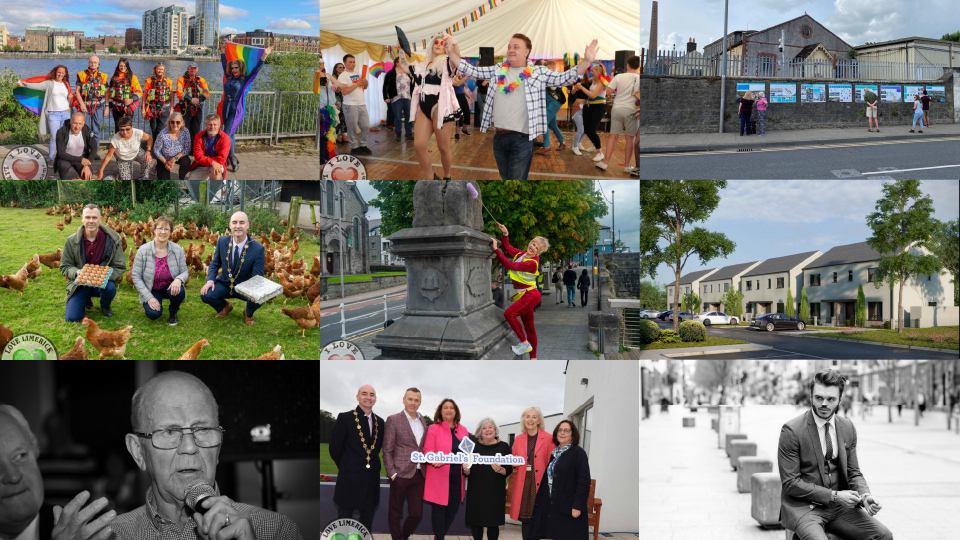 I Love Limerick 2021 – Here is a look back at some of this year’s memorable moments, both happy and sad.

What a tough year! Hoping 2022 is better for all of us and wishing you all the greatest success and happiness for the coming year. Here is a look back at some memorable moments both happy and sad from our past year with I Love Limerick 2021:

In July, Limerick Pride Festival 2021 took place with a virtual Parade and Pridefest featuring performances from many local artists, drag queens and the annual Tea Dance with Myles Breen. The theme was ‘Different Families, Same Love’.

The Pride festivities kicked off with the Rainbow River Swim Parade which saw over 80 swimmers from Limerick swimming group Limerick Narwhals taking to the river followed by over sailing boats, paddle boats and kayaks in a celebration of Pride on the River Shannon.

Lisa Daly, Chairperson and Director of Limerick Pride Festival said, “Our Rainbow River Swim Parade was an exciting physical way to represent pride. We wanted a visible parade to show people we are here while also keeping in Covid guidelines.”

In July, we lost beloved entertainer and LGBTI figurehead Leo Shine at the age of 60.

Leo was a character about Limerick who brought warmth and good energy wherever he went. Many have taken to social media to pay tribute to him, remarking on his witty sense of humour and crediting him with being a trailblazer for gay people in Limerick.

In August, a detailed masterplan of Limerick Twenty Thirty’s development of the Cleeves Factory site on the North Circular Road was highlighted on large placards, which were fixed to the walls surrounding the long derelict but historic area of Limerick City.

In August, I Love Limerick launched a new campaign to promote some of the amazing family businesses in the city and county, in conjunction with Limerick Enterprise Office Limerick and Daniel Butler, Mayor of Limerick City and County, asking Limerick consumers to look for local when shopping for products, services and experiences.

Mayor Butler spoke to 13 businesses about their history, what they offer customers and why it is best to shop local and I made a film about each business.

Mayor Butler said of the campaign, “As all our businesses reopen, it’s more important than ever to support the small businesses in your community. I’m asking Limerick people to look for local. Small businesses are the lifeblood of our cities, towns and villages, providing vital economic activity and employment opportunities. By looking for local, we can all support jobs in our community.”

Watch videos of our visits to the businesses on HERE

In August, two ‘modular’ houses which were partially pre-constructed in a Southill factory, arrived in Moyross, where they will be placed in the footprint of previously demolished houses.

The units are part of a 38-home project delivered by Clenn Construction, initiated by Limerick City and County Council and the Peter McVerry Trust.

Twenty-four of the two and three-bedroom homes will be in Delmege Park and Hartigan Villas, Moyross, with the remaining 14 in Carew Park, Southill.

John O Donnell, formerly of Vizes Field, Limerick, provided years of great entertainment to the people of Limerick as the musical MC of ‘Erics’ on St Joseph’s Street for over 40 years.

Many Limerick people have wonderful, nostalgic memories of John at Eric’s Pub. Eric’s was famous for its song culture with John at the helm as the MC and Florence Lynch at the piano. John would sing, tell jokes and stories and would call all the customers up to sing their favourite songs. John was a natural on the stage.

When the pub closed in 1997, Florence and John took their act to the Old Stand pub as the culture of music was such a huge part of their lives and they could not let it go. There they continued the singsong tradition for another number of years.

John is very deeply regretted by his loving wife Phil, his sisters, his children, grandchildren, nieces, nephews, other relatives, friends and neighbours, and his many friends.

In October I Love Limerick released an anti-litter comedy campaign. The six-part film series is called ‘Shannon Banks’ and I play the titular character Shannon, a 57-year-old Limerick Tidy Towns volunteer with a sharp tongue and a great love for Limerick. In each episode, Shannon takes her audience to famous Limerick landmarks in an effort to keep them neat and tidy.

The idea for the character Shannon Banks comes from my own desire to keep the streets of Limerick clean. I just don’t understand why people destroy their own city, where we live, eat, play, and work. I wanted to create an anti-litter campaign that delivers an important message, while also showcasing the best of Limerick and having a bit of fun.

I hope people find the message of love at the heart of each episode. Even though Shannon Banks is a bossy person, she also has a heart of gold and really loves Limerick.

Thanks to everyone who worked on it. While it is a comedy series, ‘Shannon Banks’ also has an important message that should ultimately be remembered – ‘Love Limerick, Don’t Litter’.

In October, St Gabriel’s Foundation launched its new Children’s Respite House in Mungret and I was honoured to be the MC for the event.

The Foundation was delighted to welcome Anne Rabbitte TD of the Department of Children, Disability and Equality, who officially opened the respite house during a ribbon-cutting ceremony.

Inspired by the needs of families, the centre was designed and purpose-built in 2018 to provide overnight respite breaks for children with severe physical disabilities and complex medical needs from across the Midwest. The 6-bedroom facility cost almost €3 million, raised through a wide range of community fundraising activities, donations, grants and significant funds received from the McManus Charitable Foundation.

St Gabriel’s Foundation is looking forward to 2022 when they hope to open on a full-time basis, as the demand for services is so high. Well done to all involved. To watch a video about the Respite House, go to ILoveLimerick.com now.

In October, we lost our beloved Patrick McLoughney. The Tipperary-born, Limerick-claimed man was best known for his successful writing and blogging career. Patrick’s work has been published in countless newspapers and magazines, from the Limerick Leader to the Irish Independent, covering topics ranging from men’s style to self-care.

A male model, Patrick was well known within the Irish fashion industry, working with clothing giants GANT, Barker, Jack & Jones and Littlewoods. He was named Hi Magazine’s Male Model of the Year in 2017 and Most Stylish Man in 2019. Patrick also won ICHAS ‘Student of the Year’ in 2017.

Patrick was a qualified psychotherapist and took pride in this lesser-known side of his life. He was passionate about promoting positive mental health in Limerick City, and dearly missed by friends and family.