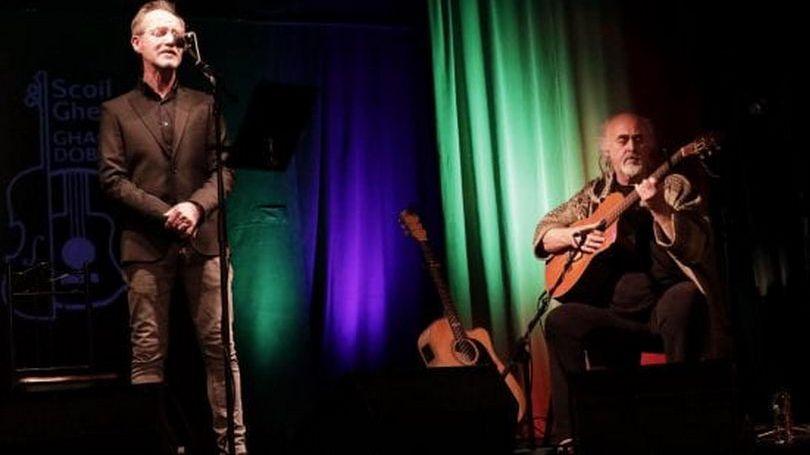 Iarla O Lionaird has carved a long and unique career in music both internationally and in Ireland. From his iconic early recording of the vision song Aisling Gheal as a young boy, to his groundbreaking recordings with Dublin’s Crash Ensemble and New York’s Alarm Will Sound, he has shown a breadth of artistic ambition that sets him apart in the Irish Music fraternity. He was born and bred in Cúil Aodha, in the West Cork Gaeltacht, with Seán Ó Riada as a neighbour and an indisputable early influence. Twice Grammy nominated, Ó Lionáird has worked with a stellar cast of composers internationally and has performed and recorded with such luminaries as Peter Gabriel, Nick Cave, Robert Plant and Sinéad O’Connor. His unique singing style has carried him to stages and concert halls all over the world, from New York’s Carnegie Hall to the Sydney Opera House and beyond.

His voice has graced the silver screen also, with film credits extending from The Gangs of New York to Hotel Rwanda and most recently as featured singer in the film Brooklyn starring Saoirse Ronan. He is the vocalist with the critically acclaimed Irish/American band The Gloaming.

Steve Cooney has been described by the Irish Times as a ‘musical polymath’ and is best known for his development of an influential style of guitar accompaniment to traditional Irish dance music, for which he won the National Entertainment Award in 1997. He came to Ireland from Australia in 1980 and maintains his connections with the Aboriginal culture there, into which he was initiated. He has participated in making more than 100 CD’s, either as a guitar or bass player or as producer and engineer. A poet and songwriter, he has worked with many iconic international artists from rock and roll and country music, but his primary focus is Irish traditional music.

Special guest on the night will be an Irish fiddle player, Zoe Conway, a prodigious talent, equally at home in both traditional Irish and classical styles. Zoe has performed across the globe and has performed with acts such as Riverdance, Rodrigo y Gabriella, Lisa Hannigan, Nick Cave and Lou Reed among others. Most recently at University Concert Hall, Zoe joined forces with the RTÉ Concert Orchestra for the venue’s 25th Anniversary Gala Concert.