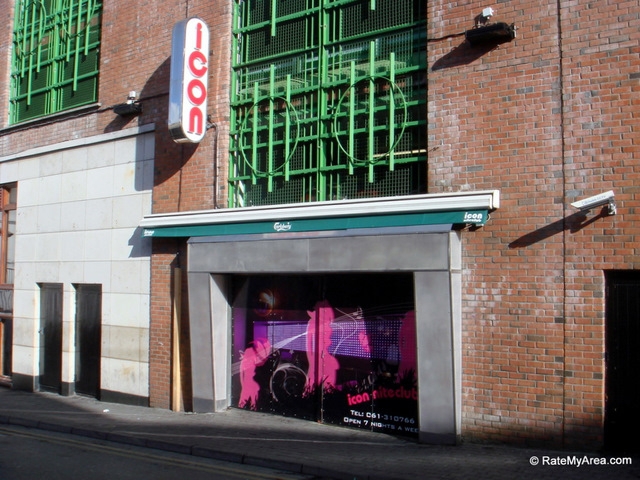 Icon Nightclub Limerick: The Cult of D’Icon by Jen Ronan looks at Limericks beloved nightclub Icon or D’Icon to the locals.

By Jen Ronan aka The House of JRo

Ah, The Icon – where would you be without it? You’d have fewer mornings waking up full of regret after shifting that young fella from out foreign (Killarney) and calling him Colin all night when his name was Mike. Not your fault, though.

I’m here to expose the truth about one of our most notorious and best-loved clubs in the mainstream scene. I’m taking no prisoners. For this piece, therefore, I will henceforth be addressing this supernatural institution by its proper term – D’Icon. Anyone who calls it ‘The Icon’ is clearly an undercover witch-hunter or an outsider and should be dispatched by any means necessary.

Named after the ancient Limerick deity Dionysus, the God of Midweek Craic and Shenanigans, it is not officially known exactly when the temple of D’Icon was established. Ask anyone who claims to be a regular there, and a vague mist washes over their eyes and they utter as if in a trance “But..it’s always been there. Hasn’t it?”

This kind of carry-on happens all the time, and this intrepid reporter has dug around and dug pretty deep. The same response is forthcoming every time the question of the origins of D’Icon is asked. Now, I’m not saying I believe in ghosties and goblins or whatever, but I know being glamoured when I see it.

It’s not just linked to vampires, you know. Half the townsfolk of this city have been glamoured by supernatural forces working their voodoo in and around the area of D’Icon. It’s the only explanation for why so few people remember having been there the night before but have no hesitation in wanting to go there again.

The author of Icon Nightclub Limerick: The Cult Of D’Icon, Jen Rogan.

Pumping bright lights and hypnotic beats throughout its hallowed halls, the Shaman-like high priests known to those on the inside as “Dee-Jays” lure anyone in with an itch for a soul-bursting pop beat and a refreshing beverage to lift the spirits.

Like Pavlov’s Dog, the opening bars of a new Pitbull song make every girl simultaneously react in the exact same manner – screeching in a range only heard to bats, raising their arms, shouting “WOOOOOO” and dragging anyone within a ten-foot radius onto the dancefloor to worship at the altar of Chart Music. Shoes are, of course, optional.

D’Icon does not discriminate when it comes to the type of people who walk through its doors of an evening looking for a dose of Vitamin Boogie. I should know. As someone who might be classed by others as ‘alternative’ or ‘goth’ on account of not looking like a regular club-goer, I’ve been known to cut a serious rug or ten on the floor in there, with no regrets whatsoever.

A couple of years ago, I was out with some college friends who were serious D’Iconites in their own right. Being vastly outnumbered when it came to discussing where we would ultimately end up, the plan for D’Icon was set in motion, and off we all went, some more reluctantly than others (just me, giving out yards).

Once in the door, I tried my best to hold my sulking expression in place, but it evaporated once I realised what music was playing. It was an Eighties night! The opening bars for ‘Footloose’ kicked off, and I was on that dancefloor faster than Paul O’ Connell on a Leinster player. On and on the playlist of awesomeness went, at one point almost moving me to tears of nostalgia.

D’Icon had won me over, as long as it made with the cheesy Eighties pop every now and again. From that night on, I would nip in and out of the venue over the coming years, even breaking out for Beyonce’s “Single Ladies” no matter how many times I heard it. I believe it’s actually a legal requirement to dance every time that comes on. Some rules are meant to be kept.

Week after week, D’Icon is packed to the gills with partygoers, mostly students from the various colleges around the place. Its music is light, poppy and chart-based, and suits the majority of revellers who just want a beverage and a bop and to forget the stresses and strains of modern life for a couple of hours.

The outside of the icon nightclub Limerick back in 2017.

Many a pair of spray-tanned female leg is on show – at times it can resemble a “Mini-Skirts of the Midwest” exhibition. And the shoes, good Lord. I have maximum respect for girls who manage hours on end tottering about on stilettos and platform heels at altitudes so high it’s a wonder they don’t require breathing apparatus – I get nosebleeds wearing anything taller than a pair of Converse.

Every second guy seems to be wearing the same blue and white checked Ben Sherman shirt too, I can’t explain it – maybe they’re the sacred robes of the initiated like the mini skirts and platform heels? Only magic can answer that one.

At the heart of all the magic and supernatural powers that keep D’Icon thriving week in and week out is the escapism from the humdrum dullness of everyday life. It’s a pleasure, both guilty and otherwise, to all who step through its dark and neon hallowed halls.

Don’t let anyone turn their nose up at you for wanting a bit of an old-school boogie in a place where the charts are king. (They a do a Ladies Get In Free thing on a Thursday, which I’m not a fan of as a rule in any club; I don’t know about you girls but I can pay my way in, my vagina doesn’t get me any other free stuff as far as I know!)

Now I’ve revealed the truth – that D’Icon has magical powers and draws in all sorts. It also makes time stand still – I’ve often stepped out at the closing time and not had a notion even what day of the week it is, not to mind the time. It also takes years off you – I’ve stepped in the doors of the magic D’Icon and shaved ten years off my life. Ask any fella I’ve chatted up (Ahem).

That may or may not be the magic though. But that’s for science to decide. Some love it outright, some harbour it as a guilty little secret, some go there weakly protesting but are the first on the dancefloor when the first few seconds of Galway Girl kicks in. It’s a unifying force. D’Icon is at the heart of unity in our fair city. Bet you never thought you’d see THAT in print, did you?

Limerick Treaty Suicide Prevention has protected our citizens since 2018