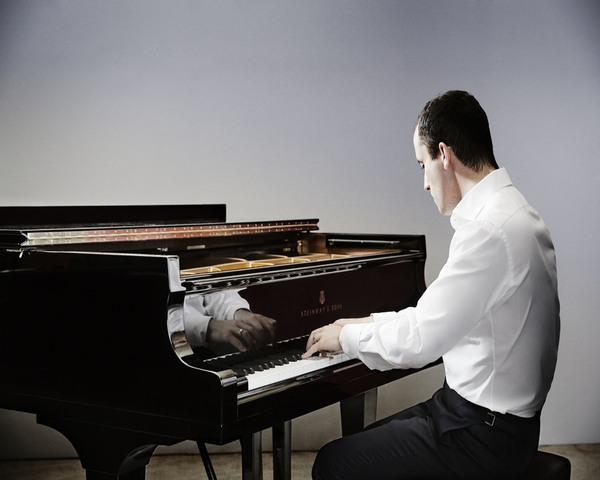 There is no shortage of fine young pianists but occasionally a name springs up and stands out from the crowd for exceptional musicianship as well as superb technique. Igor Levit – one of the greatest pianists of our time performs with the Irish Chamber Orchestra. Igor Levit at UCH

The Irish Chamber Orchestra performs concerts in Dublin and Limerick (15 & 16 March respectively) with the gifted virtuoso Jörg Widmann, Principal Guest Conductor/Artistic Partner of the orchestra. These significant concerts mark the beginning of a three-year collaboration with one of the world’s fast-rising pianists, Russian-born Igor Levit and coincide with the ICO’s first international (3-year) residency in Heidelberg – which sees the orchestra perform several concerts, over the next three years, at the distinguished Heidelberger Frühling Festival with Levit.

Igor Levit has been called the future of piano and the player of the century.  Some pianists retain a physical detachment from the piano but Levit bends close, leans in and embraces it.  In his much anticipated debut with the ICO, Levit performs Mendelssohn’s Piano Concerto No. 2, which oozes creativity, technical wizardry and soulful lyricism.

Mendelssohn’s precocity is evident in those early lost sparkling Sinfonias  (No. 12) written at circa 14 years and re-discovered in 1950.  His Sonata for Clarinet and Piano, written at fifteen, remained unpublished until 1987. Widmann will perform a world premiere of its stunning middle movement, the Andante re-arranged by Widmann, for Clarinet, String Orchestra and Celesta, with Levit on celesta.    Widmann’s Jagdquartett (Hunt Quartet) is rough wild and exciting, brimming with energy as the ICO traverses fields and forests of notes reaching a climactic, killing conclusion.  Finally, Weber’s virtuosic Symphony No 2. In C major is a fine example of his style demonstrating what Debussy described as Weber’s ability to ‘scrutinise the soul of each instrument’.

Levit hails from Gorky, Russia but moved to Germany, graduating from the Hannover Academy of Music, Theatre and Media in Germany, with the highest academic and performance scores in the history of the institute.   He was the youngest participant in the 2005 Arthur Rubinstein Competition in Tel Aviv and has won major piano competitions including First Prize at the Hamamatsu International Piano Competition in Japan.  He has an incredible recording pedigree, having tackled three of the biggest variation cycles in the piano literature — Bach’s Goldberg Variations, Beethoven’s Diabelli Variations and Frederic Rzewski’s The People United Will Never Be Defeated.  His 2013 Beethoven disc won him the BBC Music Magazine Newcomer of the Year 2014 Award, the Royal Philharmonic Society’s Young Artist Award 2014 and the ECHO 2014 for Solo Recording of the Year. His recording of Bach’s Six Partitas was nominated for 2 Gramophone Awards.

Don’t miss one of the great pianists of our time performing with the Irish Chamber Orchestra on Tuesday 15 (UCH Limerick) and Wednesday 16 March (Round Room, The Mansion House, Dublin).