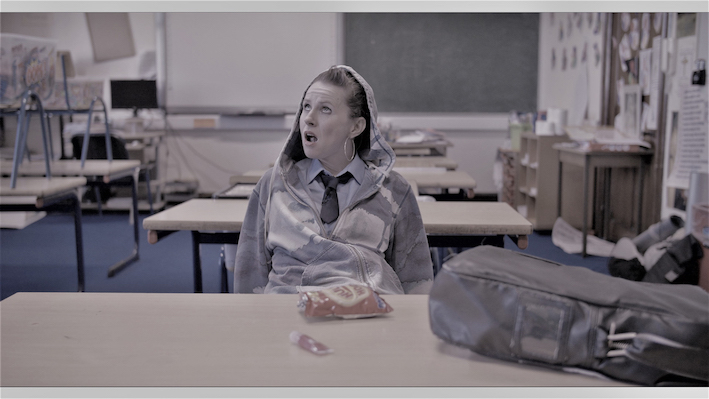 Kelly Roberts is a foul-mouthed 15-year-old and she is not a happy bunny, ‘innit? Surviving on a dreadful council estate in 90’s Manchester, waving the dole flag of the Working Class with her heartless ‘Mam’. And now, to top it all off, Sacred Lady High School has only gone and roped her into lunchtime appointments with a psychologist! As if Kelly is gonna give anything away. As if Kelly is going to open her heart and soul to a stranger. You’re ‘avin a laugh, Sweet’eart… right?

This one-woman show written, directed, produced and performed by Colette Forde will run from Thursday 5th to Saturday 7th April at Chez Le Fab as part of the Limerick Fringe Festival. ‘innit’ is truly a One Woman Show, as not only has Dublin-born Colette Forde written, produced and directed it; she is also starring in it as the foul-mouthed nevertheless beloved school girl, Kelly Roberts! It is a laugh-out-loud, gritty yet poignant piece derived mainly from her own experiences as a 15 year growing up in 90’s Manchester as part of a single parent family. Both songs featured in the production were also co-written and performed by Colette herself.

It hit a humble success with sold-out performances at The Cork Arts Theatre, ‘Skit’s and Giggles’, ‘The Friary Cork Festival’ and equally well-received performances in Connelly’s of Leap and The Clonakilty Organic Arts Festival. Audiences and teachers were extremely moved by hilarious yet desperate ‘Kelly’ and urged her to take the production to schools. ‘Teen Speak’ was founded in November 2018 with an interactive and entertaining 2-hour workshop with the aim to destigmatise therapy for teenagers and young people. In order to produce the show’s debut full stage production last year, Colette managed to attain part sponsorship kindly from The Woodford, Printability, nd Doppio, all Cork businesses plus Payments People based in Sydney Australia.

It is truly a one-woman show with Forde firmly taking the reins and making her vision of Kelly Roberts come to life on stage. “Kelly Roberts simultaneously made me laugh out loud, punched me in the face with articulated obscenities and pulled on my heart-strings, all the while making me want to learn more…Colette’s talent shines through as she masterfully embodies this creature and takes you on an experience you won’t want to miss’’

Tickets for all shows are €10. The show is suitable for ages 16 and older.

For more information on the innit at Chez Le Fab, go here.