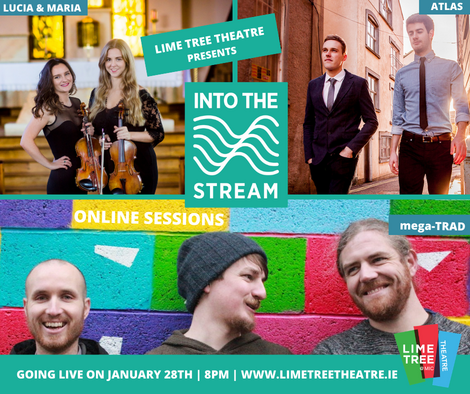 Into the Stream Online Sessions features some of Limerick’s most exciting traditional and folk acts.

Live streamed by Lime Tree Theatre, this first broadcast of  Into the Stream  Online Sessions features some of Limerick’s most exciting traditional and folk acts.

Fiddle duo Lucia and Maria have been performing together for ten years. Virtuoso players on both the trad and classical scenes, they bring their intricate arrangements to everything from sean-nós songs and Swedish polskas, to Billie Eilish covers.

Atlas, comprising of Cillian King on concertina and Cillian Doheny on guitar, released their debut album “Affinity” in 2016 to great acclaim. Both seasoned traditional musicians, their work with Atlas sees them explore new ground. Accompanied by a string section, they create mesmerising soundscapes reminiscent of Sigur Ros.

Seán O Dalaigh, Cillian O Dalaigh, and Denis McAuliffe, known as mega TRAD, are a trad improv trio. In their own words, their music is “big, rich, foot-stompin’, headbanging Irish Traditional music saturated with deep bass, transcendent FX and pulsing beats”. Their electric sets will bring the feeling of a live gig right into your sitting room.

A note of thanks to the young Limerick start-up Tracworx for the use of their technology during the recording of this concert in December 2020. Its technology allowed us to monitor the musicians and technical staff as they went through the recording process, recording the distances between each person and time spent in the venue and storing the data for potential contact tracing for 14 days. Tracworx are leading the way with this new technology and providing valuable assistance in helping us and many others adapt to these new and challenging circumstances.

For more stories on the Lime Tree Theatre go HERE