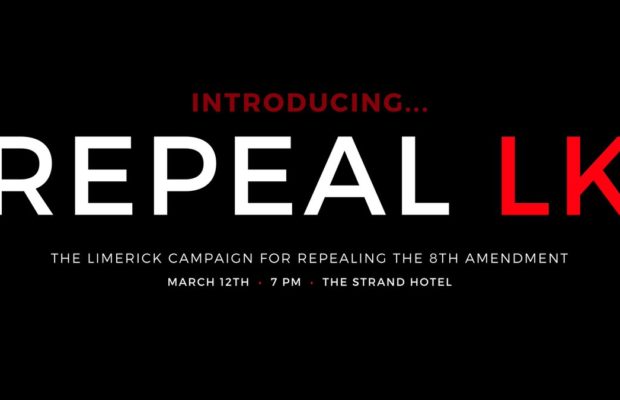 Repeal LK is delighted to announce its formation as an apolitical group set up to campaign for repeal of the 8th Amendment in Limerick City and County. Repeal LK is supported by local political parties and established pro-choice organisations across Limerick, who have all agreed to set aside their political differences for the next 80 days to work together with Repeal LK for the duration of the campaign.

As part of this work, Repeal LK (formally Limerick Pro-Choice) is inviting members of the public to get to know them via a ‘Repeal Icebreaker’ event in The Strand Hotel, Monday, March 12th at 7 pm.  This interactive event will be an opportunity for the public to meet the people behind the Limerick Repeal Campaign, learn more about the work that’s being done and find out how they can get involved.  The event will also host a range of speakers, including Traveller activist Brigid Qulligan and local actress and playwright Joanne Ryan.

Repeal LK are working closely with political parties and established organisations from across the city and county to ensure there is a comprehensive and cohesive campaign strategy going forward in the region.  Members of a number of these organisations will be available to converse with the public about the Limerick Repeal Campaign on the night.

Chairperson of Repeal LK, Yvie Murphy said, “Limerick people are keen to get involved in the repeal campaign and this event is our way of breaking the ice and including them in our work.  It will give the public the chance to meet with us, see what we’re about and, crucially, find out how they can play a part in this campaign and help us make history.”

Sinn Fein Public Representatives Maurice Quinlivan and Paul Gavan have both indicated their support for Repeal LK.  Deputy Quinlivan explained, “We believe that this campaign needs co-operation and co-ordination between all progressive groups who are committed to removing the 8th Amendment from our constitution.  Repeal LK is just the type of broad campaign we need to win this referendum”.  Senator Paul Gavan, who was a member of the Oireachtas Committee which recommended Repeal said “We must not condemn another generation of women to have to travel abroad in order to receive essential medical care.  We must trust women, trust our medical professionals and ensure that this awful amendment is removed from the constitution, Repeal LK has the support of Sinn Fein.”

Labour TD, Jan O’Sullivan commented, “As Labour TD for Limerick and as a member of the Oireachtas Committee on the 8th Amendment I fully endorse the Limerick Repeal Campaign and will be actively working with others to convince the people of Limerick that the Constitution is not the place to deal with a complex and personal issue like Abortion and that they should support the referendum to remove Article 40.3.3.  The constitutional prohibition has not stopped thousands of women each year from travelling to Britain to terminate a pregnancy or from taking pills bought online with no medical support or supervision.  We need to deal sensitively with this issue in our own country and I look forward to engaging with people in Limerick over the next few months and to campaigning with Repeal LK.”