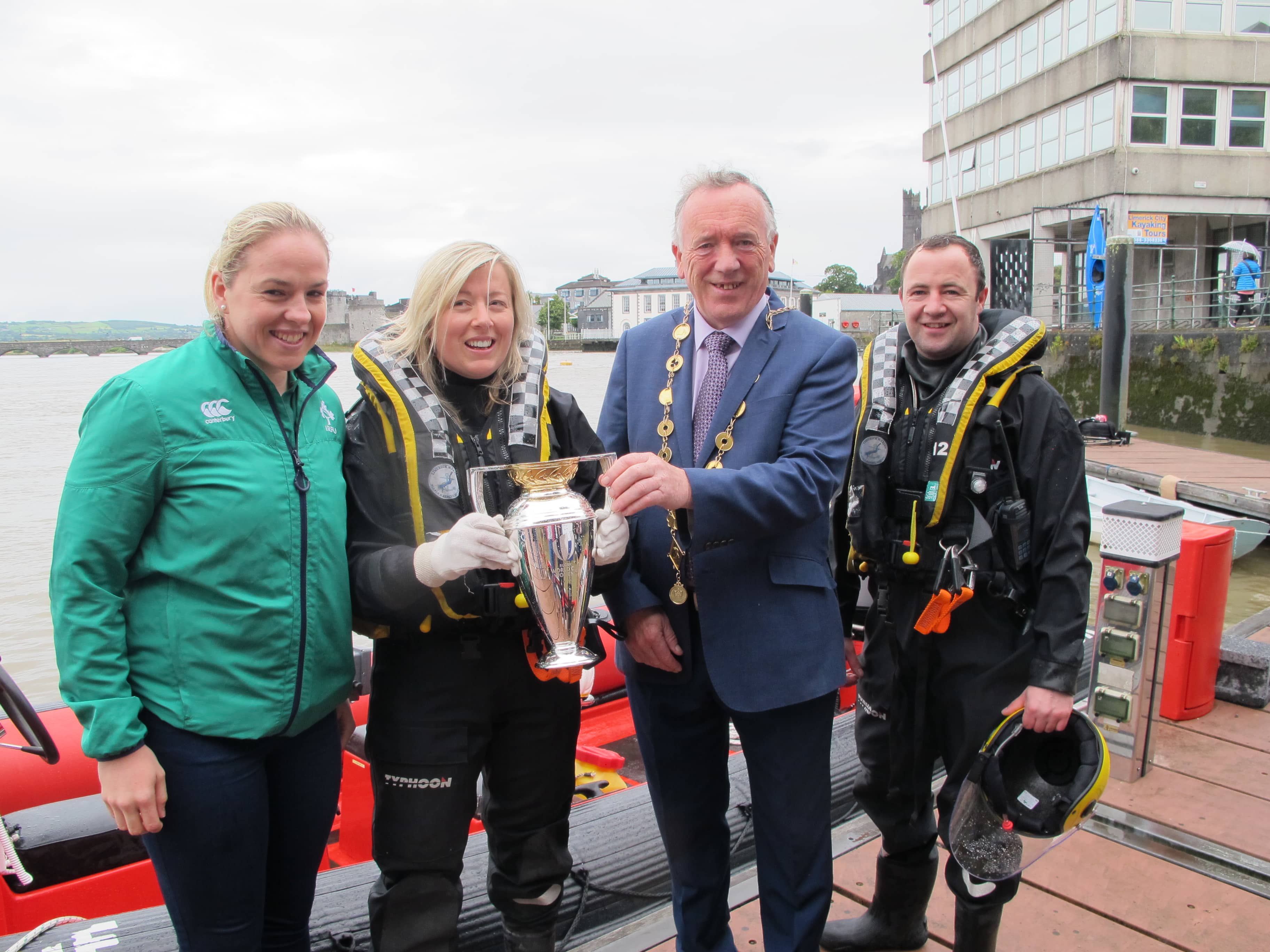 Ireland’s Women’s Rugby Captain Niamh Briggs arrived at Arthur’s Quay Park this morning with the World Cup trophy she hopes to lift in a month’s time.

Many eager fans greeted Niamh and the trophy as she came in on a boat just as the rain stopped. Ireland’s famous rugby anthem ‘Ireland’s Call’ played as she walked up to the park with the trophy and took pictures with every fan in attendance.

Limerick City and County Council and the IRFU brought the trophy to the city to mark the countdown to the Women’s Rugby World Cup, which takes place in Dublin and Belfast from 9th to the 26th of August.

Niamh’s boat was escorted by the brave people of Limerick Marine Search and Rescue as well as the Nevsail Kayakers, who played a game of catch with a rugby ball on the water.

Mayor of Limerick City and County Cllr Stephen Keary was there to welcome Niamh and the trophy to Limerick as well as former Ireland Women’s Rugby captain Fiona Coughlan.

There were many games to enjoy at the event also, including a rugby kicking game where fans got to test the speed of their drop kicks as well as a very novel penalty kicking competition where fans tried their luck at kicking rugby balls at targets floating on the Shannon.

When asked about the recent announcement of Ireland’s squad for the tournament, Captain Niamh Briggs told I Love Limerick:

“We’re obviously delighted with the squad, I think it’s the strongest squad we’ve ever gone in with. It’s going to be difficult we understand that but we are really looking forward to the challenge.”

She continued: “It’s amazing for the 28 girls that were chosen and obviously very bittersweet for the girls who weren’t but they made Tom’s job very difficult to just pick 28.”

Talking about the home field advantage that the Ireland squad will have for the tournament Niamh said: “We are definitely going to use that as an advantage and a positive and hopefully we give the fans something to cheer about.”

Ireland’s first game in the tournament against Australia will take place at the UCD Bowl in Dublin on August 9 and will be broadcast on Eir Sport and RTE.