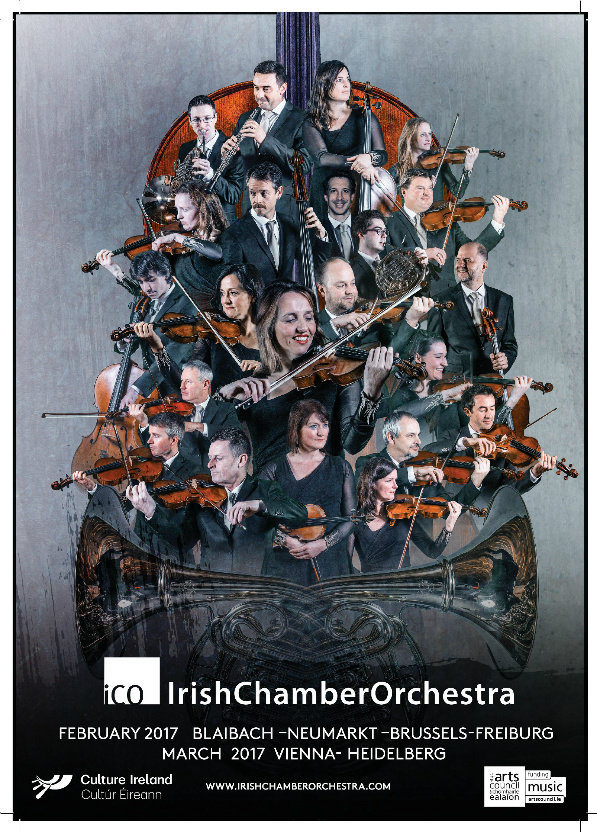 The Irish Chamber Orchestra’s Spring Season opens with a 4-day European tour to Blaibach, Neumarkt, Brussels and Freiburg with Principal Conductor, Jörg Widmann (13-16 February).  The orchestra visits the Konzerthaus Blaibach (Monday 13 February),  the ICO performs at the Neumarkt Konzertfreunde (Tuesday 14 February) and the Henri Le Boeuf Hall, Bozar Centre for Fine Arts, Brussels provides an ample platform for the orchestra (Wednesday 15 February 2017).  The last leg of the tour takes the ensemble back to Germany to the Konzerthaus Freiburg (Thursday 16 February).

The Irish Chamber Orchestra (ICO) is Ireland’s finest chamber orchestra, combining high-quality performances with an expansive artistic vision. The orchestra’s trail-blazing approach continues to attract some of the world’s finest musicians.  German composer Jörg Widmann(ICO Principal Guest Conductor/Artistic Partner) made his name as a prodigiously gifted clarinettist and he’s one of a relatively rare breed enjoying a dual career as composer-performer.   He directs both tours from the clarinet.

The February tour showcases works by Widmann alongside Mendelssohn, Mozart & Weber.  Widmann’s 180 Beats Per Minute, is a prodigious work, inspired by “techno” music and oozes youthful rhythms.  His more recent Three Shadow Dances skillfully display different aspects of woodwind techniques, in an entertaining way.  Mendelssohn’s magnificent orchestral seascape Fingal’s Cave Overture is coupled with Weber’s Concerto No.1 in F Minor Op.73 for Clarinet & Orchestra, a popular but demanding work. Finally, the ICO perform the last but greatest of Mozart’s symphonies – his jubilant Jupiter Symphony No. 41 in C Major represents the perfection of the classical form at that time.

In March, the ICO makes its debut and will be the first Irish orchestra to perform at the prestigious Vienna Konzerthaus (23 & 24 March). This famous hall is regarded as one of the largest and most artistically progressive institutions in international music and is central to Vienna’s reputation as one of the world’s leading music capitals.  The programme will be repeated in Heidelberg as the orchestra returns for the 2nd year of its 3-year residency at the Heidelberger-Fruehling (28 March).

To coincide with the 500th anniversary of the Reformation, the ICO performs Mendelssohn’s Reformation Symphony No. 5.   Widmann brings his own twist to the Andante from Mendelssohn’s Clarinet & Piano Sonata, a piece which has become a signature tune for the ICO & Widmann abroad.   Widmann re-introduces the electrifying Russian pianist Igor Levit who performs Mozart’s popular Piano Concerto No. 21 in C Major (Elvira Madigan).   Mozart’s brilliant Don Giovanni Overture is coupled with his Adagio and Fugue in C minor, an exquisite example of his mature compositional excellence.

The Irish Chamber Orchestra is resident at the Irish World Academy of Music and Dance at the University of Limerick, Ireland and is funded by The Arts Council of Ireland/An Chomhairle Ealaíon.  ICO international touring is generously supported by Culture Ireland.

For more on the Limerick music scene click here