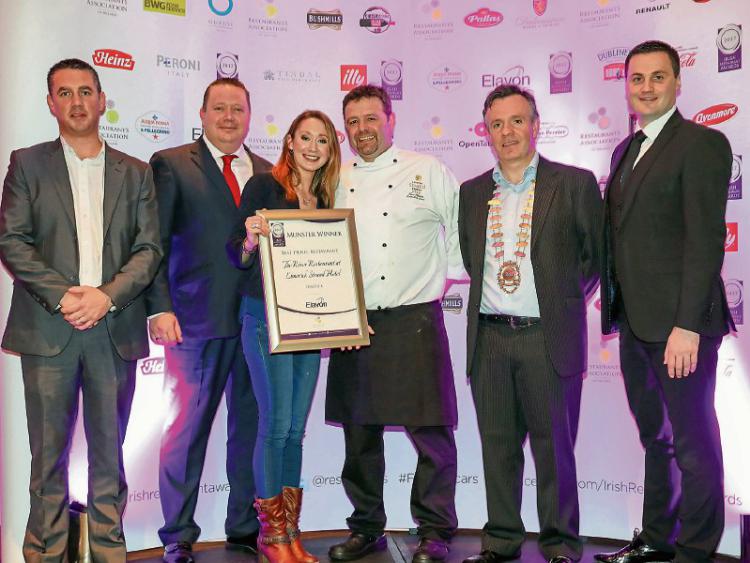 Pubs, bars, restaurants, cafes and chefs across Limerick have claimed awards in the regional finals in this year’s Irish Restaurant Awards.

The Irish Restaurant Awards ceremony, which took place at the Limerick Strand Hotel on Tuesday evening, saw the presentation of 60 awards in a ceremony attended by over 600 people.

The winner of the best restaurant was 1826 Adare, which opened four years ago, with proprietor Wade Murphy, who has worked in some of the top kitchens around the world, winning best chef.

The best hotel restaurant was awarded to The River Restaurant at the Strand Hotel, and The Maigue Restaurant at Dunraven Arms Hotel in Adare was honoured for best customer service.

The best newcomer was awarded to La Cucina Centro on Henry Street, a sister operation of the popular La Cucina in Castletroy, and run by Lorraine Fanneran and Bruno Coppola.

Pub of the year award was won by Tom Collins’ and the Copper Rooms won best wine experience.

Now in its ninth year, online nominations increased from 9,000 in 2013 to over 80,000 this year, as a result judging has become increasingly difficult according to the organisers.

“Our small island boasts everything from fine dining to high-quality gastropubs, from the exotic taste explosions of world cuisine to the comfort of traditional dishes,” said Adrian Cummins, chief executive of the Restaurants Association of Ireland.

“We have an appreciation for what we eat, for the journey of our food from farm to fork, and for the dedication of those working in the food industry to serve up Ireland’s finest food,” said Mr Cummins.

All county winners will now compete for the regional and all-Ireland title, which will be announced at the Irish Restaurant Awards in the Clayton Hotel, Dublin 2, on Monday, May 8.

To find out more about the Strand Hotel Limerick click HERE