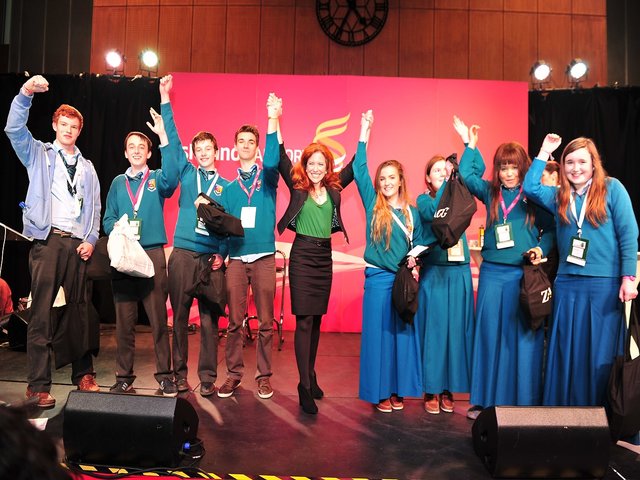 How society will live, work, play, shop, learn and travel half a century away will be imagined next week when 1,000 students, teachers and mentors nationwide gather at Shannon Airport for the ITLG Young Innovators event in association with LIT.

Two years after the hosting of what was a hugely successful inaugural ITLG Young Innovators, the event returns to Shannon on Wednesday next, April 6th when students will transform the check-in area of the airport into one great think-tank for the future.

The 700 or so students, who will compete for their schools in groups of eight to ten, will be set a simple task – to imagine the world in 2066 and how it will differ from today across a wide range of strands of our daily lives.

In addition to LIT as one of the key drivers and Shannon Airport as hosts, the ITLG (Irish Technology Leaders Group) led event is also backed by some of the world’s leading tech companies including Dell, Intel, Analog, Johnson and Johnson, Cook Medical,  Zagg and Logitech.

Enterprise Ireland and Aer Lingus are also key sponsors of the event with support also being provided by local company Carambola kids and Innovate Limerick.

In 2014, Limerick’s Castletroy College claimed top honours, beating off the efforts of 64 other teams to win the prestigious Young Innovators title and, along with other incredible prizes including devices sponsored by Dell, they won a trip to Silicon Valley in California sponsored by the ITLG.

This time around the top prize are return tickets, sponsored by Aer Lingus, to Silicon Valley, California to allow the winners see first-hand leading tech companies in action.

Students will have the opportunity over the course of the day to meet with and hear from experts from these companies as well as experts in future technologies from the third level sector.  Mentors from industry will work with students on the day to help hone their entrepreneurial and innovation skills and to encourage energetic, creative and resourceful young thinkers to come into their own.

The event was inaugurated by the ITLG together with LIT and its partners in Limerick and Clare in response to the call from the 2013 Global Irish Economic Forum to plan out how to help re-align the education system to develop “ready to work graduates” to meet the requirements of a competitive, innovative and entrepreneurial economy.

Looking ahead to next week’s event ITLG founder John Hartnett said,  “The technological age and what we do in the future will be driven largely by the young people of today.  This event may well light a flame for some of the technology innovators and entrepreneurs of the future.

“LIT have been fantastic supporters of the ITLG Young Innovators and they have put real energy behind this year’s event.  We are delighted also to be back at Shannon Airport this year; it really is an ideal location as so much in a business sense is enabled by and takes flight from Shannon.  We are hugely fortunate also to have other partners on board, such as Dell, Intel, Enterprise Ireland, Aer Lingus and Shannon Airport as their partnership is a real statement of support for young innovators.”

Said Niall Maloney, Airport Operations Director at Shannon,  “The inaugural Young Innovators event here two years ago was a fantastic success. There was such a buzz of excitement here and the level of innovation and ingenuity of the students was really encouraging and certainly gave a sense that whatever the future holds, it will be exciting.  So we were really pleased when LIT and the ITLG approached us with a view to hosting the event again this year and didn’t have to think twice.”

Said Vice President Research, Enterprise & Development at LIT Liam Brown,  “Since the 2014 event, we have had numerous teachers, principals and students contact LIT talking about the impact the event had and all keen to know if it was going to be held again and, in initiating this year’s follow-up, we took that very much on board.   It’s a historic year for our nation and we felt it all the more important that we honour that history this year by building for the future and having the Young Innovators event again will do exactly that.”

Former Cleeve’s Factory has been bought by local authority for €3.5million for 2030 plan