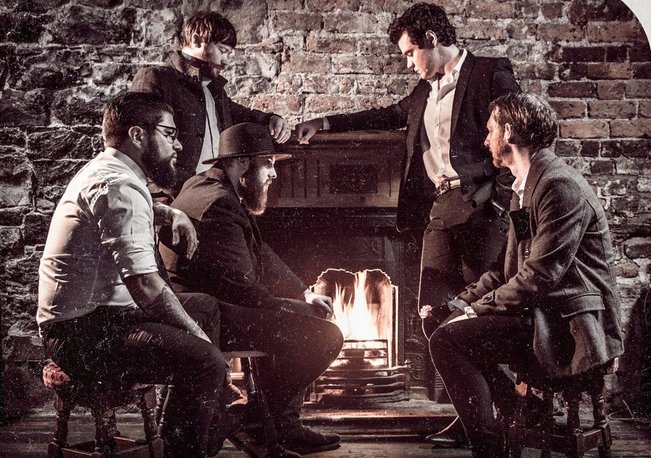 Fox Jaw will take a break from their songwriting year, to release ‘Heel to Toe’, a stand-alone Winter-infused single, accompanied by a unique hometown show they call: ‘Ivory, Wine & Song’. Crooning takes over from amplification, electric guitars are replaced by acoustics and frontman Ronan Mitchell takes a seat behind the piano to play a very different kind of Fox Jaw set, along with a rare collection of Christmas classics. The gig will take place at Dolan’s Warehouse on Friday 15 December.

Over the last decade, Fox Jaw has grown from strength to strength, evolved, overcome and journeyed across Europe & North America with their signature sound. A few years older, wiser and with lessons learned … they’re still just getting started.

With over 300 shows, 8 Singles, 5 Vinyls Releases, 2 Albums, 2 EPs, countless festival appearances, TV appearances, Magazine Covers, Music Video Awards, Album Of The Year Awards, and only one flat tyre … Fox Jaw have been bringing their signature brand of rock and roll to audiences across Europe & North America for the last 10 years.

Described as ‘a modern band with an old soul’, they have a swaggering trend-shaking growl, but always kept it sweet and melodic with an honest collection of dark pop songs. Praised as “True hidden gems” (state.ie), 2014 proved to be their most successful year to date with the release of their 2nd album, ‘Ghost’s Parade’. With an impressive amount of airplay, raising many eyebrows in the music industry, ‘Ghost’s Parade’ is an album in full sonic technicolor, verifying the band’s ability & love for a plethora of genres, above and beyond the pigeon holes many sets for them. Recorded with producer Dave ‘Skippy’ Christophers (Josh Ritter, Whipping Boy, Mundy) & engineer Owen Lewis (Flogging Molly, Snow Patrol, REM), and mastered at Wav Mastering by Richard Dowling (David Bowie, Foo Fighters, Interpol).

They’ve shared the stage with such acts as: Against Me!, Therapy?, And So I Watch You From Afar, Alabama 3, The Redneck Manifesto, Jape, Hayseed Dixie, HamsandwicH, Director, Fight Like Apes, Calvin Harris, The Feeling & many more.

Fox jaw will bring their Ivory, Wine and Song gig to Dolans on Friday 15 December. Doors will open at 9 pm and tickets are €10.

For tickets to the Ivory, Wine and Song gig click here