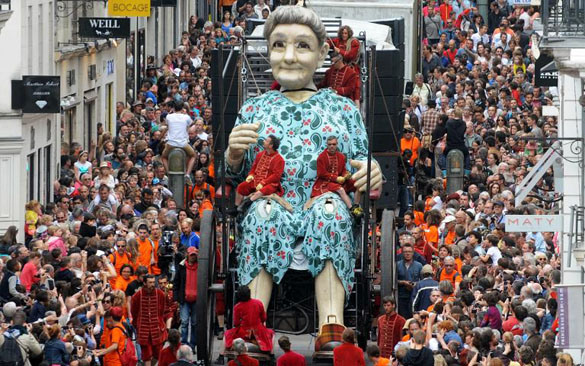 As the countdown begins to the three day epic Giant’s Journey through the streets of Limerick 5th-7th September 2014, the creative genius Jean-Luc Courcoult of Royal de Luxe reveals why he chose to bring the Giant to Ireland, what inspired him and how he developed the very special story line for’ The Grandmother fallen from the Galaxy into a field in Munster’.

Commenting on the arrival of the Giants to Limerick Jean-Luc said “I was in Ireland many years ago for a performance and the welcome from the Irish people is something I’ll never forget. Ever since I wanted to return to the spirit of Ireland and I’m honoured to have the opportunity to bring the Grandmother Giant and the tale of Max Planck to Limerick”. “I didn’t choose the character of the Grandmother by chance, she represents a character of an older universe which is a source of knowledge and wisdom for us all”.

Over the last year, Jean-Luc has made a number of trips to Limerick where he met with historians, archivists and locals, to research the city’s culture and stories from times gone by to create and develop the Giant Saga.

Iseult Byrne, Project Director for the Royal de Luxe project for Limerick National City of Culture said “Royal de Luxe is considered the world’s premiere spectacle and street art company. They have performed in some of the major cities of the world where their work has been lauded. Royal de Luxe perform a maximum of 3 times per year. In September, through the development of our relationship with them Limerick is one of those cities. The Saga of the Giants is an ongoing one, and Limerick will become part of that continuing worldwide saga through the visit of the newest Giant – The Grandmother to Limerick. This will be a transformative event for Limerick.”

Since 1993 Jean-Luc has travelled around the world entertaining over 18 million spectators in over 170 cities, in 40 countries, with the Saga of the Giants. The latest Saga was watched by one million people in Liverpool in July.

Born in Paris, Jean-Luc Courcoult ventured into the artistic world at the age of 11 through photography. Believing it was easier to gather people outside to witness his art rather than bringing them into one room, Courcoult started developing the idea of the street theatre and has brought it to millions of viewers across the globe. Jean-Luc Courcoult promises to transform Limerick into a huge theatre space offering audiences an opportunity to dream of a world where anything is possible.

This will be the biggest event in Limerick since the Pope’s visit in 1979, over 200,000 spectators are expected to visit the city. Much of the city centre will be pedestrianised so spectators can enjoy this family friendly free event.  Organisers are urging people to use public transport where possible , a full list of routes, road closures, travel advice, accommodation, accessibility and public transport are available  on www.royaldeluxelimerick.ie or check out the following useful links: http://www.limerick.ie/giantroadclosures ; www.buseireann.ie ;  www.irishrail.ie for live updates on twitter @Limerick2014

Get moving this autumn with Dance Limerick