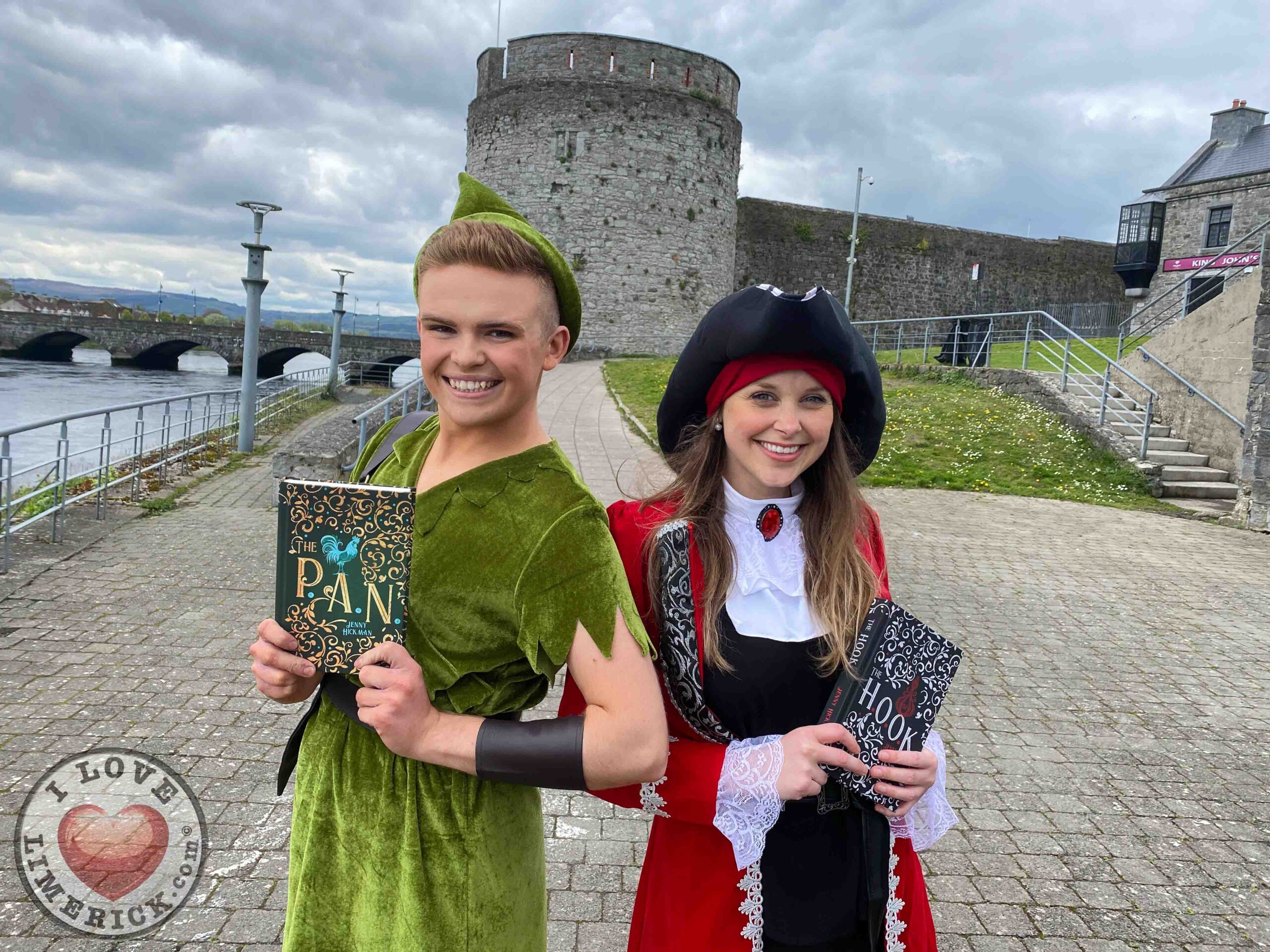 Jenny Hickman and TotallyWired99.9fm presenter Jack Moloney took to the streets of Limerick dressed as Peter Pan and Captain Hook to promote the release of Hickman’s new novel, The HOOK, the second book in The PAN Trilogy, a modern take on Peter Pan with a sci-fi twist. Picture: Richard Lynch/ilovelimerick

Local author Jenny Hickman signed with US publisher Midnight Tide Publishing to release her latest novel, The HOOK, on March 3rd this year. Originally from Mt. Lake Park, Maryland, Hickman studied abroad at Mary Immaculate College back in 2005. During that time, she met her husband-to-be, local musician and former Limerick goalkeeper, Jimmy Fyfe. The two were married in Nashville in 2012 before settling just outside of Limerick. In addition to being an author, Jenny owns Mirror Image.ie, a photobooth company that rents selfie mirrors for weddings and events.

The cover of Jenny’s book ‘The Hook‘

Hickman’s new novel, The HOOK, is the second book in The PAN Trilogy, a young adult romance series that reimagines the fairy tale of Peter Pan with a sci-fi twist. The first book in the series, The PAN, follows an eighteen-year-old orphan named Vivienne who discovers she possesses the rare Nevergene, making her part of Peter Pan’s gang of immortal teenagers.

Vivienne can either leave her life behind and escape to Neverland’s Kensington Academy with a handsome recruiter who claims he can fly or risk becoming a human lab rat for H.O.O.K.—a group of scientists determined to discover the Nevergene’s secrets by any means necessary.

The PAN is a story of found family, secret societies, first love, high-flying shenanigans, and the downsides of immortality.

The HOOK continues Vivienne’s journey as she navigates a new relationship and a devastating diagnosis—she’s destined to become one of the forgetful PAN. When she ignores a cardinal rule and one of her fellow PAN pays the ultimate price, Vivienne must face the consequences of her actions and decide if living forever is worth forgetting everything.

The HOOK is a story filled with drama, romance, and secrets.

The third and final instalment, The CROC, is set to release on July 14, 2021. The stunning conclusion follows Vivienne and her fellow PAN as they search desperately for a cure to save the forgetful while H.O.O.K. proves they are willing to go to deadly lengths to get what they want.

A Peter Pan inspired retelling with a sci-fi twist. I couldn't put it down.

For a limited time, you can read The PAN and The HOOK for FREE on Kindle Unlimited. Both books are also available to order via Amazon and Book Depository. The CROC is available for pre-order now.

Bunratty Folk Park to Reopen to the Public