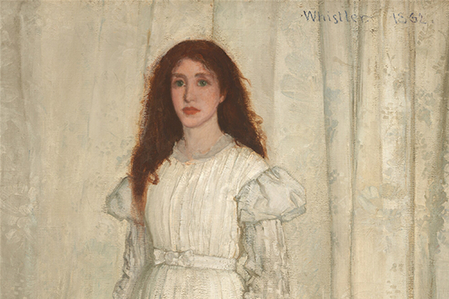 At the Royal Academy of Arts in London, an exhibition called “Whistler’s Woman in White” is now on show, featuring paintings from James McNeill Whistler of his beloved Limerick muse Joanna ‘Jo’ Hiffernan.

Whistler was an American painter active during the American Gilded Age and based primarily in the United Kingdom.

‘Whistler’s Woman in White’ began on February 26 and will run until May 22. The name of the exhibition comes from the white dress that the artist’s muse Joanna Hiffernan wears throughout the series. Painting ‘Symphony in White, No. 1′ is the central focus of the exhibition.

In 1845, Joanna Hiffernan’s parents Anne and Patrick are believed to have left Limerick and moved to London, as a result of the Great Famine.

Around the same time, Whistler moved to London as a young painter in hopes of forging a reputation for himself. Years later, in a studio in Rathbone Place, London, he met his muse.

Take a tour of the exhibition ‘Whistler’s Woman in White: Joanna Hiffernan’ with its curators Ann Dumas and Margaret MacDonald, and hear about the life of the artist’s principal model.

From there, they began a two-decade relationship, during which she modelled for some of his most beloved and famous paintings.

Their relationship lasted until Joanna’s death in her early 40s, but is forever immortalised in James’ infamous painting of her, ‘The White Girl’, in which she stands in a simple white dress against a white curtain, highlighting her striking red hair.

How Joanna is depicted in the painting was shocking in that era and the painting was rejected by the Royal Academy. However, the work influenced other artists such as Frenchman Gustave Courbet, who painted her in a series of portraits called ‘La Belle Irlandaise’.

Exhibition Curator Ann Dumas said of ‘Whistler’s Woman in White’, “I think there’s a very good trend going on in art history at the moment of trying to recover some of these models from total anonymity. I think it’s a really interesting idea. They weren’t some sort of passive, anonymous people.’

Of Whistler’s ‘Symphony in White No. 1’, Dumas said, “It’s a very large, virtually life-size portrait of this red-haired Irish girl Joanna Hiffernan, who was Whistler’s principal model throughout the 1860s. It just has so much presence. Every time I look at it, I find something new.”

For more on ‘Whistler’s Woman in White’, go HERE