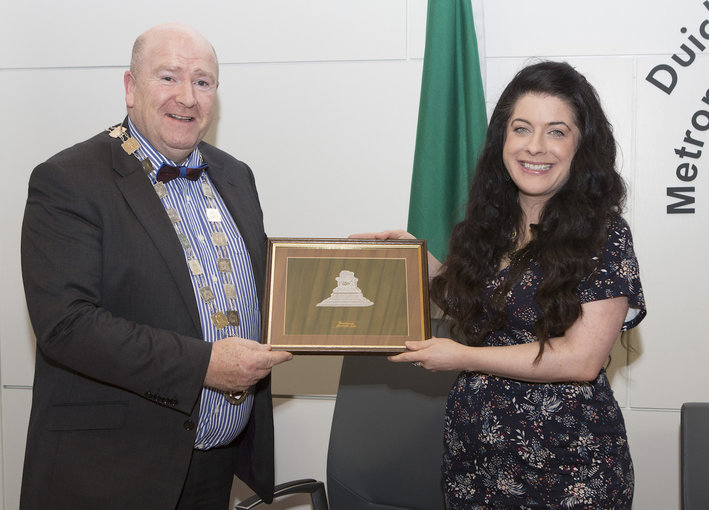 Acclaimed Limerick playwright and actress Joanne Ryan held a work in progress of her new play in an early stage of its development at the Belltable in Limerick last Friday night. This new play was created in the hope of developing an understanding of bipolar disorder.

‘In Two Minds’ was commissioned by the theatre and was produced as part of the First Fortnight Mental Health festival which challenges stigma.

Joanne spoke to the Limerick Leader saying “She feels it is a very misunderstood condition. That there is very little active and realistic representation of the disorder anywhere, It’s very much inspired by my experience with my mother. She has been collaborating with me very closely. She has been amazing. She has been very open with me, and I know a lot of families in Ireland would not be in a position to be that open about bipolar or any other mental health condition”.

Joanne Ryan also told the Limerick Leader that she hopes her play will start a debate on bipolar disorder.  “There is a lack of understanding motivated by fear. A lot of stigma comes from a lack of education. People say things they don’t fully understand. Historically, even with asylums in Ireland, they were very connected with prisons. There has always been this connection with criminality.”

Joanne has enjoyed much success over the years with her autobiographical one-woman show ‘Eggsistentialism’ taking her to the famous Edinburgh Fringe Festival as well as Cyprus and is now heading to London’s Arcola Theatre and will also be staged at The Bush in West London in the future.

In 2017 Joanne Ryan was awarded various awards at the Edinburgh Fringe Festival including The Lustrum Award, the Best Storytelling Bouquet and The Melbourne Fringe Tour Ready Award competing with 4,000 other shows.

Last month, Mayor Sean Lynch welcomed Joanne and Ann Blake to City Hall to honour them for their “contribution to the arts and theatre in Limerick”, for representing the best of Limerick and its people on the international stage and “their great awards success”.

Joanne has previously been nominated for Best Actress in The Irish Times Theatre Awards for the title role in ‘What Happened Bridgie Cleary’ (Bottom Dog Theatre Co.). In Two Minds and Eggsistentialism are part of a professional development with the Belltable Connect programme.

Joanne worked with her mother to develop the script for In Two Minds and the research for the script proved to be very intense. Joanne will be holding workshops with Limerick Mental Health Association to explore the disorder further.

Joanne Ryan shared the stage on Friday night with Ros na Rún’s Bríd Ní Chumhaill, an old pal, playing the two characters of ‘In Two Minds’. The play was directed by Ciarda Tobin, Audio Visuals and Windings were by John Galvin and Stephen Ryan was manning sound design.