By Richard Lynch on February 19, 2020@richanthon

Reflecting on the 2019 awards and announcing this year’s programme, Rose O’Connor, Pastoral Implementation Manager, said that if there are any doubts about the sense of care and community awareness of young people they are quickly dispelled through the lens of the John Paul II Award.

The programme, which is a non-competitive faith achievement award for young people aged between 16 and 18, fosters a sense of civic, community and Christian spirit in parishes. It is committed to helping young people enhance their spiritual, physical, emotional and social development through participation in school, parish and community activities.

Created to commemorate the late Pope Saint John Paul II, who was recognised the world over for his commitment to young people, the programme has now completed two years in Limerick Diocese and, according to Rose O’Connor, is giving a real insight into the character of young Limerick people.

Rose O’ Connor added, “This is our second year running the Award in the Diocese following the pilot in Kilfinane in 2016/2017. The transformative nature of the Award continues to amaze me. The young people write about how their involvement opens up a whole new experience of being part of their community and making a contribution. Relationships within their community and within their families are deepened, there is something very profound about what they get from their participation.” 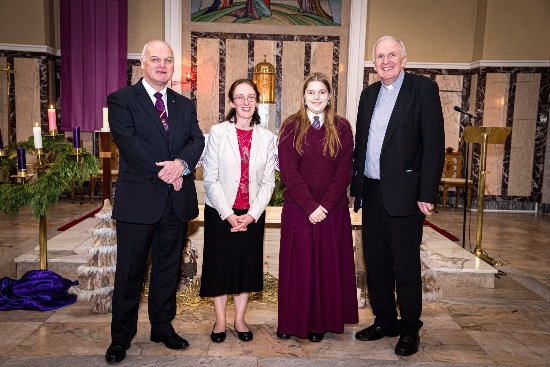 Additionally, eight received the Papal Cross Award, which is the highest-level Award. It can only be achieved once the person has already achieved a Gold medal. It is for students who have completed one hour per week for 26 weeks contribution in the Church and one hour per week for 26 weeks of contribution in their community. Young people from Scoil Pól, St Munchin’s College, Coláiste Nano Nagle, Laurel Hill Coláiste, Laurel Hill Secondary School, Ardscoil Rís and Templeglantine and Tournafulla/Mountcollins parishes participated.

Bishop Brendan Leahy noted, “St Catherine of Sienna said, ‘If you are what you are meant to be, you’ll set the world on fire’. I think the JPII award recipients showed real initiative and can set the world on fire by the way they are helping others, getting involved and spreading goodness. Participating in the Award has such potential to bring richness to their local communities and to themselves. For many, there is a realisation that young people have a significant role to play in the Church, which gives me great hope for the future.”

Papal Cross recipient Katie O’Connor, from Kilfinane, said, “It amazed me how the parishioners in my town were so grateful for all the work that young people do, they really appreciate the contribution that young people make in the community.”

Tom Conneely, Chaplain St Munchin’s College said:  “I believe in the saying that the youth is our greatest resource, as the great Irish saying goes ‘Mol an Óige agus tiocfaidh siad’ – praise the youth and they will flourish.  If we encourage our youth in the right direction, they are capable of many things, they can be of great benefit to our community. You may think, what have I to offer my community? But your time, presence, genuine goodwill and good intentions can be a great gift to others. I can personally think of no better satisfaction in this life than the warm feeling, that is free of change, that comes with helping others.”

The Pope John Paul II Award enables participants to take an active part in the life of their Church – in the life of their community and society. For further information on how to participate in this year’s programme, please contact Rose O’Connor at 061 950 000 or email: [email protected]

For more information on the Diocese of Limerick, click here

For more stories on the Diocese of Limerick, click here