By Richard Lynch on December 4, 2017@richanthon 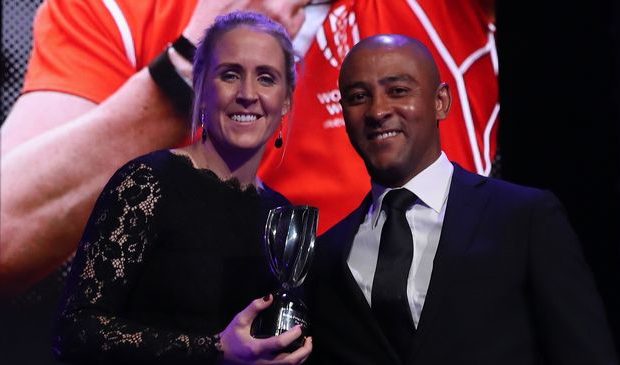 A veteran of 70 caps for Ireland, Joy Neville is now making history in the world of refereeing.

As she accepted her award the former Ireland international compared her accomplishments as a referee to those she made during her playing days.

“It’s amazing,” Neville said after receiving the award. “I retired in 2013 after we won the Grand Slam and to think that I’m stood here after refereeing the Women’s World Cup final and I’ve a lot of people to thank for that.”

“A lot of organisations but it’s mostly down to my beautiful wife Simona down there, and my family, and I’m completely honoured to be here and to receive this and I thank you and everyone who has supported me throughout this journey.” 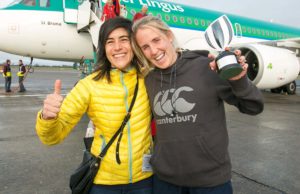 Neville spent ten years representing Ireland but retired in 2013 after helping Ireland to a Grand Slam.

“It’s all about knocking those hurdles down,” she said on receiving the award.“It’s all about breaking the barriers and creating opportunities for others.”

This month she is acting as assistant referee for three men’s matches, having recently signed a professional contract with the IRFU. Joy Neville doesn’t want to stop there though; her next goals are to head-referee in the Pro 14 league, and in the Six Nations.

There was more than festive cheer at Shannon Airport at the weekend as Joy Neville stepped back into the happiest of homecomings with her World Rugby Referee of the year award.

On a weekend when 2,000 children and their parents flocked to the airport for the annual Santa Flights, the world’s top referee was the cause of a great cheer in the arrivals hall as family and friends greeted her return.

The proud Limerick woman beamed as she stepped off her flight and walked into the arms of a proud homecoming troupe that included her wife Simona, her parents Ger and Mary.

Congratulating Joy on the success, Shannon Airport Managing Director Andrew Murphy said:  “We’ve had a lot of big moments at the airport this year but being able to welcome Joy in is right up there with the best of them.  To win any world best award is an incredible achievement but when you break the mould like she has, it really sets you apart. She is an inspiration to all of us.”