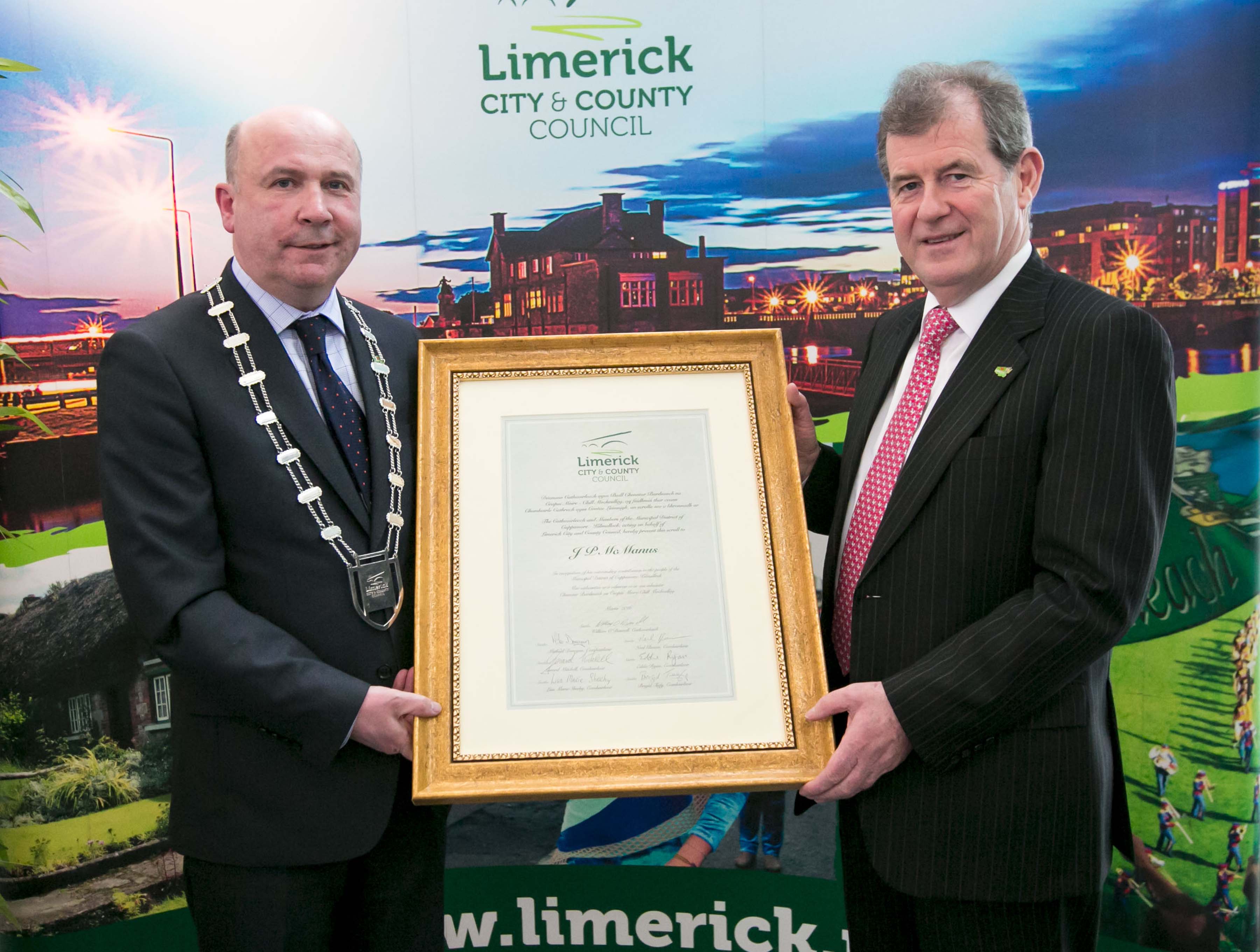 JP McManus was honoured in Limerick last Tuesday, 22 March 2016,  when Councillors of Municipal District of Cappamore/Kilmallock hosted a Civic Reception in recognition of his contribution to the local community.

The JP McManus Civic Reception was held at the Áras Mainchín Seoige in Kilmallock where the Council Chamber was also named the JP McManus Room in honour of the well-known businessperson, racehorse owner and philanthropist.

“The Members are delighted to officially acknowledge JP’s outstanding contribution to the people of the Cappamore-Kilmallock Municipal District and for representing Limerick with enormous pride and distinction down through the years,” said Cllr. Bill O’Donnell, Cathaoirleach of the Municipal District.

Cllr Bill O’Donnell, who originally proposed the JP McManus Civic Reception, added, “Limerick and the surrounding region has benefited greatly under the JP McManus Fund with millions of euro being distributed to help organisations involved in health care, education and sport.”

“St Joseph’s Foundation in Charleville is one such example. I have a personal family connection to the service and therefore, I am acutely aware of how JP’s generosity is making a difference to the work carried out there. Others include the 32-county third-level scholarship programme which has been key to unlocking the potential and academic talents of our young people. Meanwhile, JP’s Fund also played a crucial role in delivering a radiotherapy unit at University Hospital Limerick.”

“JP has been a key supporter of TLC Limerick, a wonderful initiative that takes place throughout Limerick City and County every year,” added Cllr. O’Donnell. “The fact that such generous contributions to his local community came during the recent difficult economic climate makes them all the more remarkable.”

“The presence of JP’s Martinstown Stud has also been a welcome addition to the Kilmallock area, both from an economic and from a community perspective. By investing so much in this county, JP stands out as a true business and community leader,” stated Cllr. O’Donnell.

Speaking on behalf of Council staff, Ger O’Connor, Senior Executive Engineer said, “JP never looks for plaudits for his work and therefore, it is great to see he has accepted the Council’s invitation to host a Civic Reception in his honour.

He continued, “JP has been a tremendously successful businessman throughout his life.  His work has taken him to the four corners of the world but one constant has always remained throughout his life – that is his love for his own county. No more is this typified than in his generous support for Limerick sport.

“We are a proud sporting county and this sense of pride is very much shared by JP. His sponsorship of Limerick GAA teams through the Sporting Limerick brand has helped provide so many Limerick people with great days out through sport, whether it is the GAA or horseracing,” said Mr. O’Connor.

The Civic Reception concluded with JP McManus being presented with a Scroll of Honour before he joined Cllr. O’Donnell in officially unveiling a plaque marking the dedication of the Council Chamber in his name.