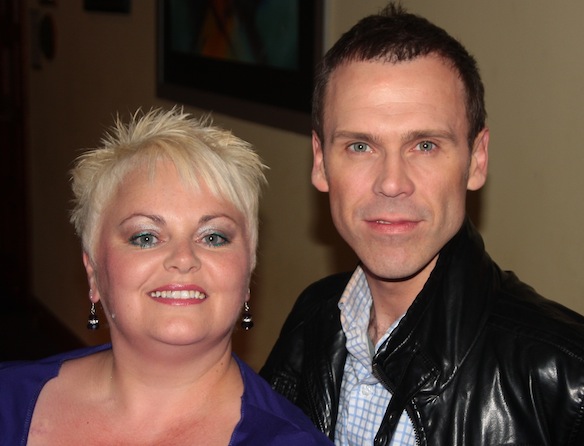 Last week the family and friends of the beloved Limerick personality Julie Anne Dineen, who passed away from cancer last November, gathered at Limerick Civic Trust Garden at Old Bishops Palace to unveil a memorial bench to commemorate and celebrate her life. The bench was built in her honour through funds raised by this year’s Rainbow Ball, held recently in the Clarion Hotel on the first anniversary of her passing. I am so proud to be able to call her my friend as shewas truly inspirational. After being diagnosed with cancer, Julie-Anne became a tireless fundraiser helping to raise up to €100,000 for local cancer services and raised awareness about the disease through numerous high profile projects. She was nominated for Limerick Person of the Year 2009 when she recorded a cancer charity single ‘Do You Believe’ and zoomed to be top of the Irish charts. She recorded the song the day after her second course of chemotherapy, in a bid to show other women there is life after battling the disease. As a founding member of local breast cancer survivor women’s group the Bosom Buddies Julie Anne has left an indelible stamp on the lives of these women and is deeply loved by all of them. When faced with her illness Julie Anne reacted with fierce determination battling to conquer it until her last breath. She was a woman of immense courage and determination, she never allowed her illness to interfere with her sense of duty to her fellow citizen and especially those who would experience the same problem she was facing. She battled on against the odds, driven by her unshakable faith and her love for her two sons, Sean 12 and Matty who is 8. Before she passed I sat down with Julie Anne for an intimate conversation about her life. Julie Anne was as real as you can get and her candid interview is not only moving but also genuinely inspirational, she told me during that interview, ’Its better to die living than live dying’. See the interview below. Love you Julie-Anne and will be thinking of you always. Richard Xxx