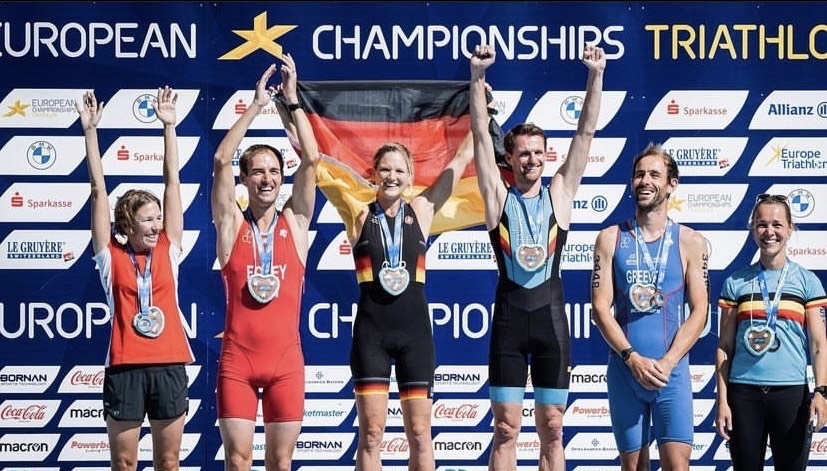 Jurgen Foley credits his success to his hometown of Newcastle West

Newcastle West man Jurgen Foley represented Switzerland at the European Triathlon Championships in Munich on August 15. Foley powered through and finished the triathlon at 1:04:53. He completed the event successfully with a silver medal.

Foley is competitive and strives to better himself. When he races, he is in it to win it. The dedicated athlete trains year-round. Jürgen said he trains in the way a farmer looks after their fields and the best time is harvest is when it is sunny.

Regarding his most recent race which saw him be awarded a silver medal, Foley is critical of how he can improve. He said he thought he could win the race but made, what he described as a mistake in the transition. However, he caught up quickly when he made up six places in the last 500m. Jürgen said he wouldn’t take part in a triathlon if he didn’t think he could win.

After a race, Foley said he likes to enjoy the moment of victory and then reflects and is grateful for the support he receives from those closest to him. He prefers to look toward the future and prepare for upcoming races.

His latest ranking saw the triathlete rise 14 positions from his 16th-place finish in the ITU World Triathlon Grand Final in Lausanne in 2019. His hard work is clearly paying off.

Foley, whose mother is of Swiss origin, credits his hometown of Newcastle West as to why he is so successful. His earliest memory of running was when as a hyperactive child, he would run circles around his parents. Running always made him feel free. He seeks inspiration from his friends, family, other athletes, and the desire to improve his skill set.

Foley said that despite having a German name he always felt a strong sense of community growing up. He fondly remembers starting out playing soccer with his local team.

Foley took up skateboarding as a hobby when he was younger and was even involved in the building of a skate park locally in Newcastle West.

Jürgen said that skateboarding influenced his running and coaching style as it taught him how to be relaxed at the right moments. He also participates in cycling, yoga, tai chi, soccer, skateboarding, snowboarding, surfing, and swimming.

Jürgen still regularly contacts West Limerick athletes to get advice and encouragement. He also states that persistence and discipline are also key to his success. Having a goal and always staying focused regardless of ups and downs is what helps him achieve success.  On average, he runs 10-20kms per week. Foley enjoys the competitive aspect of it and the challenge.

Jürgen believes people could benefit from going for runs in their local parks as it is a great way to learn how to race while also supporting the local community.  He speaks strongly about the benefits this holds for athletes and non-athletes.

The 38-year-old has always had an avid interest in a variety of sports. He has been involved in numerous sports for over 10 years. Jürgen coaches at ETH Zurich, a public research university in the city of Zürich.

Along with his love and passion for sports, Foley is also a photographer. A photograph he had taken of Limerick boxer Andy Lee winning his Irish title was once on the front page of the Limerick Post.

Jürgen has set his sight on the World Triathlon Championship Final which is going to take place this November in Abu Dhabi.

For more information on the winners of the European Triathlon Championships, go HERE