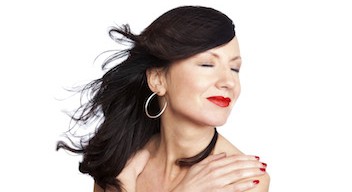 Egan is Part French – part Finnish – part charlatan, but totally amazing and all Irish. Karen Egan returns to Ireland [after a three-year absence] in a hip-hop pop-tastic spin to whet Irish audiences with her brand new sound, a new album Charlatanne and a five-stop tour of the country.

With sell-out successes at Dublin’s National Concert Hall, The Assembly Rooms Edinburgh and in Finland, creating music for and featuring in the hit BBC drama Ripper Street and formerly one third of successful all lady comedy singing trio The Nualas, Ireland’s much-loved multilingual chanteuse and comedienne Karen Egan morphs into yet another beautiful butterfly with her exciting new works of all original songs and music.

In her new show and second album Charlatanne, Egan moves from cabaret and ditches Dietrich. Instead her new sound is an explosion of original songs performed in a wide variety of musical genres. In short, it’s a rollercoaster of styles, embracing hip-hop, pop, jazz, country, French ballad, blue-grass and gospel, with lush, lamenting strings and sassy brass arrangements, groove guitars and superb musicians to boot.

This a more contemporary repertoire we are used to from Karen, she will still continue to make her infamous quips and costume changes, making for a thrilling night of comedy and new music.

Living between Finland and Ireland has given Karen the opportunity to draw from two completely contrasting cultures and influences. Embedding an incredible period of change and adjustment, many of the songs from this new album were composed during this very creative time.

The process of making an album is a demanding business but Karen emphatically states that it’s “worth every penny if it’s done right, with the best musicians”. For those who come to Karen’s show in Dolans Warehouse, they can expect highly talented musicians, heart breaking ballads, plenty of pop and much more.

Check out Karen’s website here too keep up with the latest music, events and news.