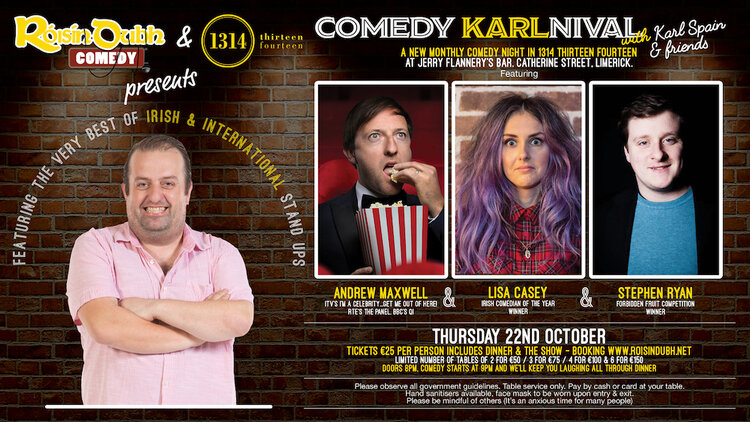 KARLnival October – This show is hosted by Limerick’s own Karl Spain.

NOTE: This event has now been postponed because of the introduction of Level 3 Restrictions due to Covid-19

This show is hosted by Limerick’s own Karl Spain. Karl has been in stand-up comedy for over twenty years. Last seen on telly hosting Laughter in The Eyre filmed at Galway Comedy Carnival 2019, Karl is probably best known in Ireland for losing a few ounces on Celebrity Operation Transformation, and his TV series Karl Spain wants a Woman in which he not only got huge ratings but he also found himself a woman. As well as being a regular at Kilkenny Cat Laughs, Galway Comedy Carnival, Vodafone Comedy Festival, Edinburgh Fringe Festival and Montreal Just for Laughs. Karl was a resident writer for Republic of Telly and still is for countless other comedians.

Having the ear of both the youth and older audience Andrew Maxwell (pictured) is best placed to get all ages to stand up and be counted.

Most recently seen on ITV’s I’m A Celebrity… Get Me Out of Here!, Andrew Maxwell is also the recognisable voice of MTV’s hit show “Ex on the Beach” (which has run for 9 series), and on Radio 4 as the host of Andrew Maxwell’s Public Enemies and as a regular on R4’s News Quiz. Having the ear of both the youth and older audience Andrew is best placed to get all ages to stand up and be counted. Last year he also won Celebrity Mastermind with the specialist subject of Lebanon (which he knew nothing about 6 months before the recording).

As seen on Live at The Apollo (BBC One), Have I Got News for You (BBC One), Celebrity Juice (ITV2) and Mock the Week (BBC Two). He is also the voice of Get Your Tats Out: Kavos Inc (Channel 5).

Throughout his career, Andrew has enjoyed many sell-out seasons at the Edinburgh Festival Fringe; he has also performed at The Amnesty / Channel Four’s Secret Policeman’s Ball (alongside Eddie Izzard, Chevy Chase and Dylan Moran), Glastonbury, The HBO US Comedy & Arts Festival in Las Vegas (alongside Jerry Seinfeld and Chris Rock), and made several appearances at the Montreal Just for Laughs Festival. He was the special guest of friend Jim Jefferies for his Hammersmith Apollo dates in London. He is also a founder member of Altitude Comedy Festival, staged in the Alps. Andrew has recorded three Live DVDs with 2Entertain (Conflict Revolution, Andrew Maxwell: Live in Dublin & Andrew Maxwell: One Inch Punch).

Lisa Casey (pictured above) is one of the most exciting and fastest rising new comedians on the scene.

Winner of Irish Comedian of The Year, Lisa Casey is one of the most exciting and fastest rising new comedians on the scene. She is a regular at Ireland’s major festivals including Electric Picnic and venues such as the Laughter Lounge, she has also performed at The Stand’s ‘Best of the Irish’ Edinburgh 2017 and has toured Australia.

Stephen Ryan is a previous winner of the Forbidden Fruit Comedy Competition, a finalist in the 2016 Irish Comedian of the Year competition and a two-time finalist in the prestigious Chortle Student Comedy Competition. This Limerick comedian has performed at numerous festivals throughout Ireland and the UK including Edinburgh, Latitude, Forbidden Fruit, TedFest and Vodafone Comedy Carnival and is a regular headliner on the Irish comedy circuit.

Please observe all government guidelines. Table service only. Hand sanitisers available. Face mask to be worn upon entry & exit. Please be mindful of others (It’s an anxious time for many people).

Featuring Andrew Maxwell (ITV’s I’m A Celebrity… Get Me Out of Here!, RTE’s The Panel, BBC’s QI),

Related Topics:comedykarl spain
Up Next