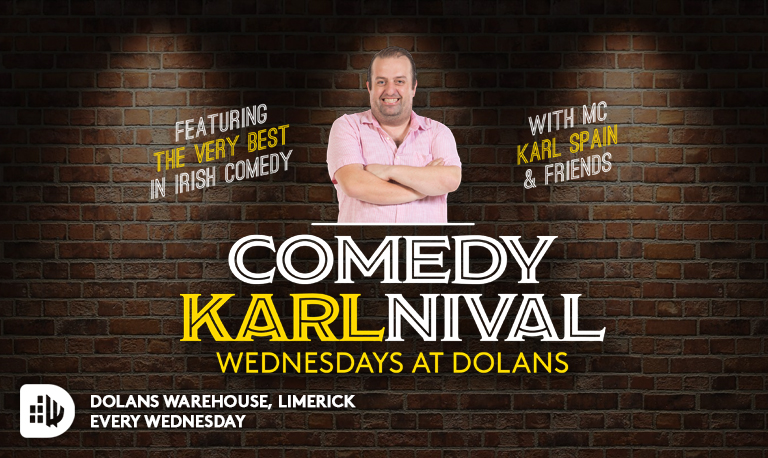 Karl Spain has been announced as the host of a brand new comedy club which is set to take place weekly in Limerick city. The award-winning comedian has teamed up with Dolans Presents to develop the new ‘Karlnival Comedy Club’ will take to the Dolans Warehouse stage every Wednesday night.

The new ‘Karlnival Comedy Club’ venture is seen by the organising team as an opportunity to offer the growing Limerick comedy audiences a regular mid-week club.

Speaking at the launch of the Karlnival Comedy Club, Mick Dolan said: “Since opening in Limerick almost 25 years ago we have taken great pride in showcasing the many leading Irish and international comedy acts that have played the Dolans stage.

“Karlnival Comedy Club is an opportunity to attract the very best names on the comedy circuit to Limerick on a weekly basis. We have teamed up with Karl Spain and together hope to realise our ambition to develop one of the best comedy clubs in the country”, he said.

The host of Karlnival Comedy Club Karl Spain needs no introduction to Limerick audiences. A popular figure in the world of stand-up comedy for over fifteen years he has been regular performer at Kilkenny Cat Laughs, the Vodafone Comedy Carnival Galway, the Edinburgh Fringe Festival and Montreal’s Just for Laughs. Spain has has toured Australia, Asia, the U.S. and South Africa, and has also toured with Kevin Bridges and Ed Byrne.

Speaking at the launch of the new club, Karl Spain said: “I have been working on the development of the Karlnival Comedy Club with the Dolans team for a number of months. Throughout my career I have loved performing in front of Limerick audiences and always believed there is room for a regular, dedicated comedy club.

“Working with Mick Dolan I am particularly excited about the opportunities that the introduction of Karlnival Comedy Club brings to Irish comedy circuit. We look forward to welcoming the very best acts from both the Irish and International comedy scene over the coming months”, he said.

The first Karlnival Comedy Club kicks off in Dolans Warehouse on October 24th.

Special guests include the Canadian stand-up Phil Nichol. An acclaimed actor, award-winning comedian, producer, presenter, writer and musician Nichol will bring his own keen sense of fun and eye for the shocking and absurd that has cemented his position as one of the best comedians on the circuit.

Tom O’Mahony joins the line-up as one of the busiest Irish headline acts on the circuit. O’Mahony has been playing every major festival and club here and abroad, he has recently toured with MTV star Tom Green and Mock The Week regular Tom Stade. He has played sell-out shows in Edinburgh, Cork, Leicester, Dublin and Barcelona, and supported the likes of Nina Conti, Michael Winslow, Neil Delamare and Tommy Tiernan as part of their nationwide tours. He is a regular on Irish TV and starred alongside the legendary Rik Mayall in Season 1 of the award-winning TV series Damo & Ivor.

Joining Nichol and O’Mahony is Margaret McHugh, a stalwart of the Irish comedy scene who has graced stages the length and breadth of Ireland and beyond, as well as our telly screens.

Karlnival Comedy Club hosted by Karl Spain will offer fans of comedy in Limerick a unique weekly setting in which to showcase the very best that the Irish comedy circuit has to offer.

Tickets for the opening night of the new club are on sale now and can be purchased here.