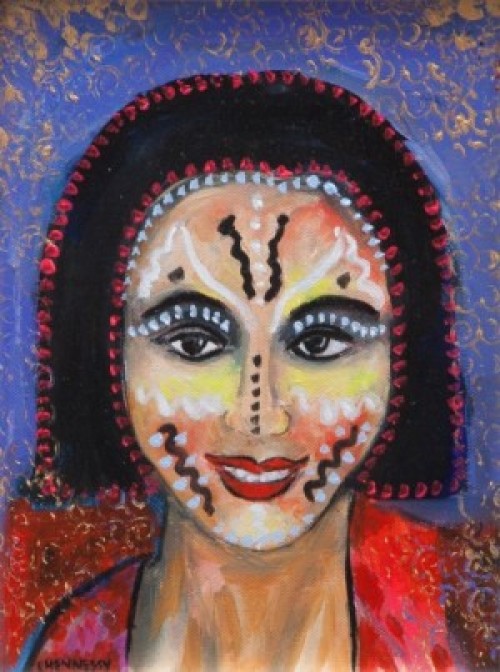 Kate Hennessy has an exhibition of paintings, drawings and sketchbooks on display in the Hunt Museum now and until Jan 28th next. The name of the show is ‘Chroma’ which refers to the intensity of colour.

She was born in Limerick and educated at the Salesian Convent, the High School, and the Limerick School of Art.  She qualified as an art teacher and worked in Dublin, Kilkenny and Limerick for many years.

Painting however was and is her first love.  She gets inspiration from the sketchbooks and photos made on her travels, as well as visiting art galleries, churches, mosques and museums all over the world. Kate has visited many fascinating countries such as India, Iran, Sudan, Morocco and the Philippines.  A small selection of sketchbooks is on display in the Hunt Museum along with the paintings they inspire.  There is also a group of Indian ink drawings inspired by the book ‘Irish Medieval Sculpture’ by the late John Hunt, whose private collection was donated to the state and is housed in the Museum of the same name.

This is her 30th one-person show since 1967.  The first one was held in the Thomond Gallery, Cecil Street, Limerick that was owned by George Stacpoole the antique dealer, but is long gone.

Since then she has held solo shows in galleries such as Cork Arts Society, Davis Gallery Dublin, the Source Thurles and the Air Gallery London.   She had work accepted in numerous Group Shows all over the country, for example, the R.H.A., Sligo Small Works, Claremorris Open and Limerick Printmakers. She organized several group shows for her fellow Limerick artists in the seventies and eighties, in Dublin, Cork, and Limerick and a show in the Butler Gallery Kilkenny that was opened in 1982 by the late Jim Kemmy. In 1984 along with Vivienne Bogan she organised a show of Limerick artists in Temple Bar galleries, which was opened by the late Charlie Haughey. She showed her first Still Life painting in the Irish Artists’ Winter Exhibition, which was held annually in Limerick City Art gallery and featured artists from all over the country.

Several people supported her when her when she was a young artist, and she wises to acknowledge them, Ann and Paddy Reidy, Tony and Sheila Brazil, Evan and Dorothy Morrissey Mairtin and Bertha O’Briain, among others.  She was greatly influenced by her teacher, the late Jack Donovan, principal of the Art School, as well as Sandy Barclay Russell, an art expert from the UK who lived in Parteen.

This show has over 50 pieces, black Indian ink drawings based on the late John Hunts Book called ‘Irish medieval Sculpture’. The second part of the show includes a sample of Kate’s travel sketchbooks in the glass case and the colourful paintings they inspired.

The Hunt Museum is open 7 days a week, 10am-5pm daily and Sundays 2pm-5pm.  Admission to exhibition is free, running until January 28th 2016.