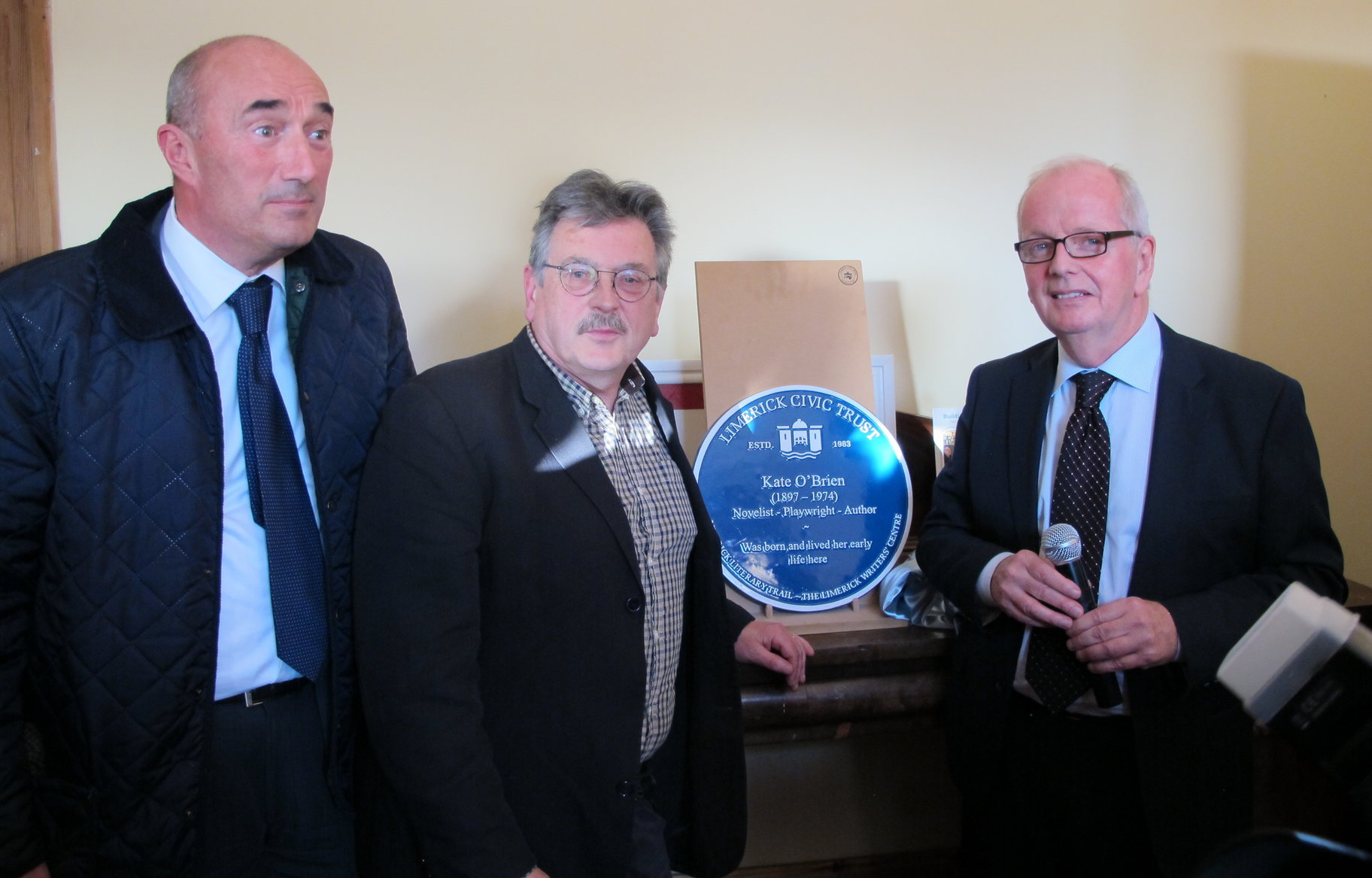 At the unveiling of a plaque in honour of the author, Kate O’Brien at Boru House was Dave O’Brien, Limerick Civic Trust, Dominic Taylor, Limerick Writer’s Centre, and Professor Desmond Fitzgerald, President of the University of Limerick. Picture: Maxine Bramley/ ilovelimerick

A commemorative plaque to Limerick born novelist, playwright and author, Kate O’Brien, has been unveiled by Dr Des Fitzgerald, President of UL at her birthplace Boru House, Mulgrave Street. The ceremony which was organised by The Limerick Writers’ Centre and Limerick Civic Trust, took place on Monday 2nd October with Dr Patricia Lynch delivering an address at the event.

Kate O’Brien, a world-renowned novelist and playwright, was born in Limerick in 1897. Her novels were some of the earliest examples of Irish literature to feature homosexual themes, which ultimately lead to them being banned on release under the Irish Free State’s censorship laws.

The unveiling of this plaque is part of a wider project to create a Limerick Literary Trail which will enable and encourage citizens and visitors to discover Limerick through its literary heritage. The Limerick Writers’ Centre is partnering with Limerick Civic Trust on this venture. In July 2014, the Centre unveiled a plaque outside The Locke Bar on George’s Quay to commemorate war poet Robert Graves and his association with the city. In February this year, President Michael D Higgins unveiled a plaque to poet Desmond O’Grady outside the White House bar. July of last year, Frank McCourt was honoured with a plaque outside South’s Bar and in October, Richard Harris had a plaque unveiled by his son Jared.

At the Unveiling of a plaque in honour of the author Kate O’Brien was Donough O’Brien, the nephew of Kate O’ Brien and Professor Desmond Fitzgerald, President of the University of Limerick, who unveiled the plaque that day. Picture: Maxine Bramley/ ilovelimerick.

The Limerick Writers’ Centre’s project is to develop the Limerick Literary Trail as a resource for the city, its citizens and visitors.

Through its Commemorative Plaque Project, Limerick Civic Trust has erected almost 70 plaques around Limerick to indicate the location of important landmarks or buildings that had important links with Limerick’s past and to provide historical points of reference to interest the student, historian, visitor or citizen.

Limerick was the birthplace of world-renowned author, Kate O’Brien. Her novels were some of the earliest examples of Irish literature to feature homosexual themes, which ultimately lead to them being banned on release under the Irish Free State’s censorship laws.

Her first novel, Without My Cloak (1931), is a chronicle of middle-class Irish life. Its theme would be constant throughout her novels, namely the struggle (particularly the struggle of Irish women) for individual freedom and love against the constricting demands of family, bourgeois society and Catholic religion. The Ante-Room (1934), Mary Lavelle (1936), Pray for the Wanderer (1938), The Land of Spices (1941), The Last of Summer (1943), O’Brien’s most successful novel was That Lady (1946), set in sixteenth-century Spain. It was later made into a rather disappointing film.

O’Brien returned to Ireland in 1950. She settled in Roundstone, Co. Galway, where she wrote The Flower of May (1953). Neither it nor As Music and Splendour (1958), set in the world of nineteenth-century Italian opera, was a success. In 1962 she published My Ireland, an idiosyncratic pen-portrait not unlike her earlier Farewell Spain (1937), for which she was banned from Franco’s Spain. She also wrote a biography of the Saint Theresa of Avila (1951). In 1965 she returned to England and died in Canterbury on 13th August 1974.