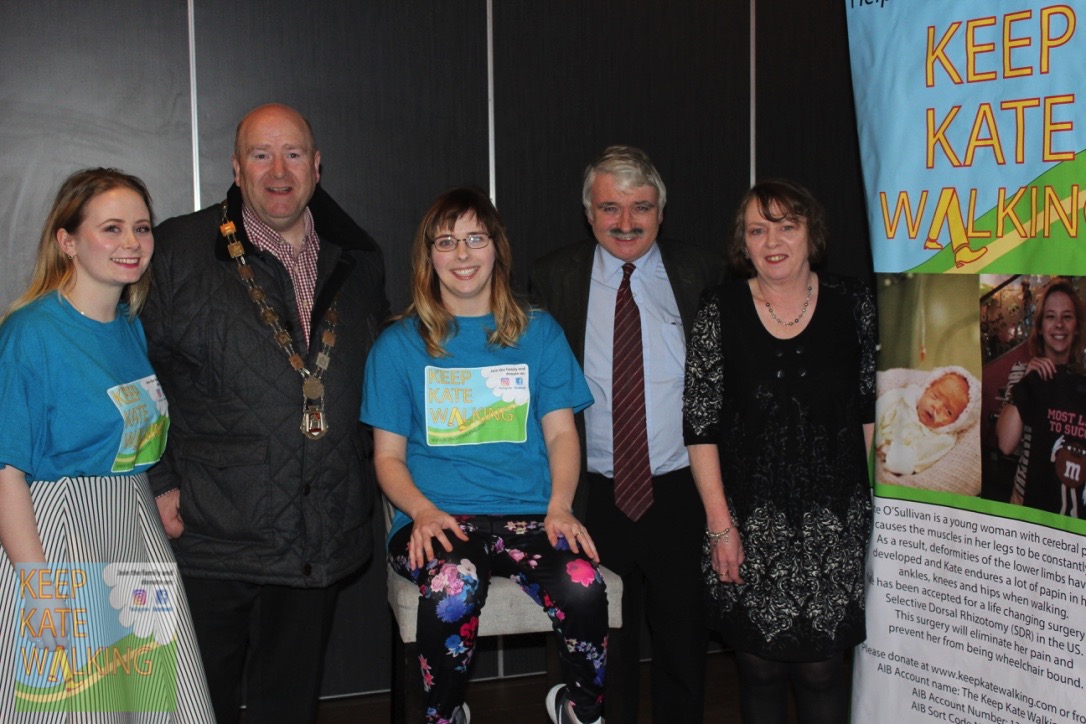 Kate O’Sullivan pictured with mayor Seán Lynch and her parents, Kate and Jerry, at the Keep Kate Walking Launch Night.

A Castletroy local Kate O’Sullivan, along with her family and friends, is aiming to raise one hundred thousand Euro in order to travel to America for surgery that will enable her to continue walking unaided and living a normal life.

Kate O’Sullivan was diagnosed with Spastic Diplegia Cerebral Palsy at the age of two, after her parents noticed she was pulling herself around using her upper body strength rather than crawling. This physical disability causes the muscles in both legs to be constantly tight, causing pain and difficulty in moving them, as well as causing the affected person to develop deformities in their lower limbs and abnormal walking patterns.

Kate’s parents holding her shortly after her birth in 1994.

Her parents were told she would never walk and spend her entire life in a wheelchair. Her parents refused to accept this, and worked tirelessly to provide their daughter with any doctor and physiotherapist they thought may help. On Kate’s fundraising website, her mother wrote that she was “doing physiotherapy with her multiple times a day, watching her cry in pain, as I stretched her legs to prevent the muscle tightness. As a mother, it was heartbreaking to watch my daughter cry and not be able to ease her pain. However, I knew in my heart and soul, she would walk one day.” Kate defied doctors’ expectations and took her first steps a few weeks prior to her fourth birthday.

Kate was never one to let her disability get the better of her. She spent much of her childhood involved in sport such as Camogie, and developed a keen interest in chemistry in her teen years, concluding at the age of seventeen that she wanted to study Chemistry with Forensic Science in University College Cork. In her Leaving Certificate year, however, Kate had to undergo surgery to release her tight Achilles tendons. Despite having to take eight weeks off to recover, Kate proved her strength and intelligence to everyone when she achieved the required amount of points and went off to study her dream course at UCC after being accepted in the first round.

Kate O’Sullivan has recently graduated from UCC with an honours degree in Chemistry with Forensic Science and is hoping to go on to study a postgraduate degree in Forensic Science. However, without surgery, this will not be possible.

The surgery Kate requires is called Selective Dorsal Rhizotomy (SDR) and will be performed at St. Louis Children’s Hospital in the United States in August 2018. This surgery will be hugely life-changing for Kate as it will permanently reduce the stiffness in both of Kate’s legs, as well as any pain she may be experiencing. It will also prevent further deterioration of her leg muscles, enabling Kate to walk normally for the rest of her life.

No other treatment options for spastic diplegia CP offer a long-term solution. The surgery is not available in Ireland and is typically not performed on adults. As a result, Kate O’Sullivan and her family will have to travel to Missouri in order for her to have the operation. She will be performed on by Dr.  T.S. Park, the most experienced SDR surgeon in the world, having operated on more than 3,500 children and 130 adults since 1987. The operation is only available for Spastic Diplegia Cerebral Palsy patients who haven’t fully lost their ability to walk yet. 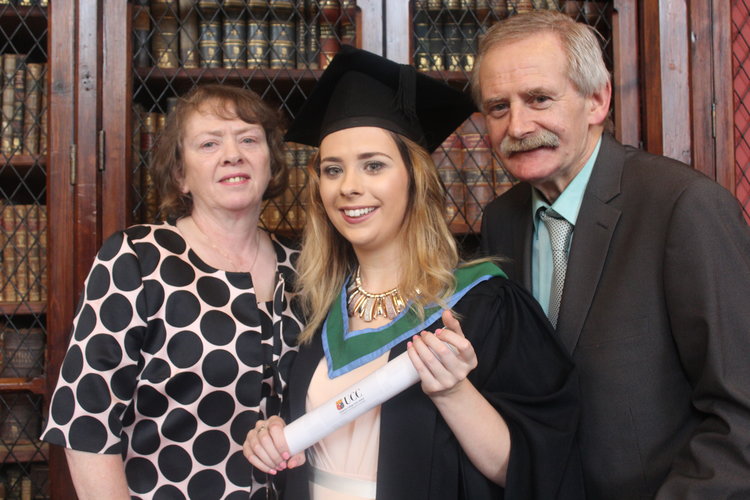 Kate with her parents, Anne and Jerry, on her graduation day October 19th, 2017

The surgery involves an incision being made to the lower back, the opening of the L1 vertebrae and motor nerves being separated from the sensory nerves. The sensory nerves are then separated into four or five rootlets which are electrically simulated to test the response of the muscles. The nerves that get abnormal responses are then cut.

After the surgery, Kate will spend five days in hospital, but will have to spend a further three weeks in St. Louis to undergo daily intensive physiotherapy. This will allow her to recover well and regain some strength and mobility following the surgery. Upon her return to Ireland, at least two more years of intensive physiotherapy accompanied by physical exercise will be necessary.

Hopefully with the support of the local and wider communities Kate O’Sullivan and her family will provide enough money to receive this life-changing operation.

Related to this story