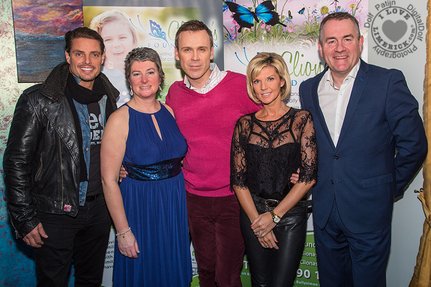 In an open letter posted on the Keith Duffy Foundation website, Keith explains, why €28k went to the Limerick founded charity Cliona’s Foundation who support families with children with life-limiting illness for non-medical expenses.

“The reason that Cliona’s Foundation Received considerably more than anyone else is simply, I have seen and witnessed the amount of families in and around Ireland struggling to make ends meet while trying to give their child with limited time left with us in this world some great memories of love and support. A struggle nobody should ever have to endure.”

A further €21k was donated to the charities Fighting Blindness, The Hub and St Francis Hospice in Raheny, with a further €2k to various charities that take care of the homeless.

Keith Duffy and Cliona Ring meeting for the first time many years ago during Keith’s time with Boyzone.

Cliona’s Foundation is an Irish Charity that provides financial assistance to families with critically and terminally ill children and was set up in 2007 by Limerick couple Brendan and Terry Ring, after they tragically lost their 14-year-old daughter Cliona, they out to honour her memory by helping other families.

“In 1998, Cliona was diagnosed with an inoperable brain tumour,” Terry explains. “In January 1999, she was referred to Crumlin [children’s hospital] and over the course of the next 18 months she had chemotherapy treatment.

“For the next eight years, she remained very well. There were a few hiccups along the way, but nothing too serious and most times we were at home within the week,” Terry adds. “Cliona led a very full and happy life up until 2006, but it was during these eight years that we realised that there are people out there with very ill children, who were in less fortunate situations than us and were struggling to make the trips to hospital, or buy essentials for the sick child, or pay travel costs and parking fees, which can be huge.”

Funds raised are used to pay for the “hidden” costs, including accommodation, food, petrol and other miscellaneous expenses incurred by families who must take sick children to hospitals or other medical facilities for frequent treatments.

There is currently over one hundred children’s charities operating in Ireland, Cliona’s Foundation is unique in that it focuses completely on non-medical assistance for families who have exhausted all other avenues of assistance. No other national charity in Ireland offers financial support for non-medical costs associated with the illness.

In January 2016, Keith Duffy celebrated with Clionas Foundation when they announced they had raised over One Million Euro in their nine years of fundraising with support offered to over 300 families.